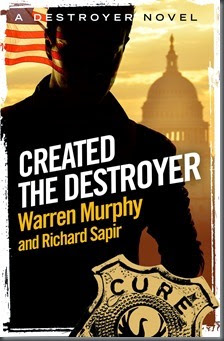 Long-running, mega-selling pulp thriller series makes it over to the UK

One legendary hero. One epic series.

Sentenced to death for a crime he didn’t commit, ex-cop Remo Williams is rescued from the electric chair at the eleventh hour and recruited by a secret government organisation named CURE. From this moment, he ceases to officially exist.

From now on, he will be an assassin, targeting criminals who are beyond the law. Remo’s trainer is a grouchy old Korean named Chiun, whose mastery of the terrifyingly powerful martial art of Sinanju makes him the deadliest man alive.

Together Remo and Chiun set forth on their epic, impossible mission to vanquish every enemy of democracy – every bad guy who thinks they can escape justice.

This is a new era in man’s fight against the forces of evil.

This is the time of the Destroyer.

According to the press release, this series (which clocks in at 50 books!) has sold more than 50 million copies. That’s pretty impressive. First published in 1971, Created: The Destroyer is an interesting first book in an early government assassin thriller series. A literary ancestor of Vince Flynn et al, the novel was interesting and, sadly, disappointing.

It feels almost churlish to spend much time critiquing this novel. It was never meant to be high art or literature (in the back of the book, it’s described as a “satiric adventure” series, which may account for some of my concerns). This is very much a pulpy thriller that is intended to be entertaining and a quick read.

That being said, the opening chapters of the book, when Remo is on death row (having experienced an implausibly speedy capital murder trial and sentencing), the authors manage to squeeze in a bit of social/legal criticism. It’s slight, but it echoed some of the critiques you hear and read today. Another theme that runs through the novel is the rising crime rates of the 1960s and ’70s. I thought this was really good, the way they write about the state of society at the time – it’s almost dystopian, channeling the so-called “malaise” of the ’70s. The focus of CURE is on combating domestic corruption and societal decay – corrupt judges, police, politicians; rampant drugs, crime, etc. If nothing else, people should find the non-terrorism focus a nice change from contemporary thrillers. 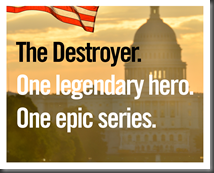 Some of the conventions and colloquialisms are certainly of the time, but they are surprisingly fleeting. Some of them left me completely confused (with absolutely no frame of reference, I just sailed past them). The level of detail is uneven, too: fans of today’s thrillers (or really, I suppose, post-Clancy thrillers) may be disappointed in the brevity in certain areas. There’s a good amount of focus on Remo’s training, and quite long descriptions of karate conventions, philosophy and hand-positions. In fact, most of the book is Remo’s training and “origin” story, if you will.

The final third of the book takes us through his first case, to track down and neutralise the shadowy “Maxwell”. This is where the story, in my opinion, seriously lost steam. I almost didn’t finish reading it. Everything moves so fast. Progress on the case is so easy – a single source, a series of exceedingly fortunate events… It felt rushed, and secondary to the establishment of Remo and Chiun (more on him in a moment). We’re informed that the bad-guys have figured out that something weird it going on, that they’re being investigated by a shadowy group. They’re surprisingly sharp, for cookie-cutter bad guys. But, it arrives in the story without much groundwork. It’s moving so quickly, almost as if the authors took some shortcuts because they were impatient to get the story out there. Or, maybe, they just wanted to tell a ripping yarn. Some of the dialogue and phraseology has great flare:

“I promise you terror for breakfast, pressure for lunch, tension for supper and aggravation for sleep. Your vacations are the two minutes you’re not looking over your shoulder for some hood to put one in the back of your head. Your bonuses are maybe five minutes when you’re not figuring out how to kill someone or keep from being killed.”

The stereotypes you’ll find in Created: The Destroyer are rather dated. There’s some unfortunate cultural insensitivity – especially regarding Chiun, who is basically a Mr. Miyagi-type martial arts teacher, only Korean. (When Remo refers to him as the “chink”… Sigh.) This made me wonder why this series was picked for re-issue, given how clear this insensitivity (not to mention sexist portrayal of and terribly-written women) – I’m sure this is all very “of the time”, but given the current environment in the reading/fan community and society as a whole, I do wonder about the wisdom of resurrecting a series that includes so many culturally insensitive and retrograde stereotypes. Chiun does push back, though, in the story, which I welcomed. He also has a couple of good lines in the novel, directed at Remo and the U.S. For example, this nugget that resonates today, too:

“It is pitiful that there is not more central intelligence in your Central Intelligence Agency.”

There were also a couple of other fleeting moments when characters pushed back against other stereotypes (for example, against Italian Americans). Perhaps this is a suggestion of progressive authors injecting their opinions and views into their fiction in a gradual manner? I’d be willing to give them the benefit of the doubt and try the next couple of books in the series.

Felton’s “origin” story is well-told and interesting, seeing how he came to be the head of the mafia’s hit men ‘division’. This reads a little like narrative history, which I enjoyed. Otherwise, though, the dialogue can be a bit canned, a bit cheesy to these modern eyes/ears (a Mafia goon, talking to Felton, ends every sentence with “Boss”). Rather cliché, given all that has come since – it doesn’t come close to satisfying, in this post-Sopranos world. Felton’s daughter, and Remo’s stunningly-fast scheme/courtship of her was terrible. The less written about it the better.

Briskly paced, well-written at times (but sadly not consistently), Created: The Destroyer was an interesting read. I’m sure a lot of people will enjoy giving this series a try, but I have a feeling many of those people will not find it lives up to more modern, slicker series, nor even thrillers from just a decade after its original publication. If you can overlook insensitivities of forty years ago, and want an old-fashioned thriller, then you may like this. If you are a fan of modern thrillers, though, you will probably find this series wanting.

News broke on August 22nd that Shane Black will be directing the movie adaptation of Created: The Destroyer. Black directed Iron Man 3 and also wrote the Lethal Weapon movies.

This review was written as part of the Destroyer Blog Tour. Here is the tour poster, with a list of the rest of the stops… 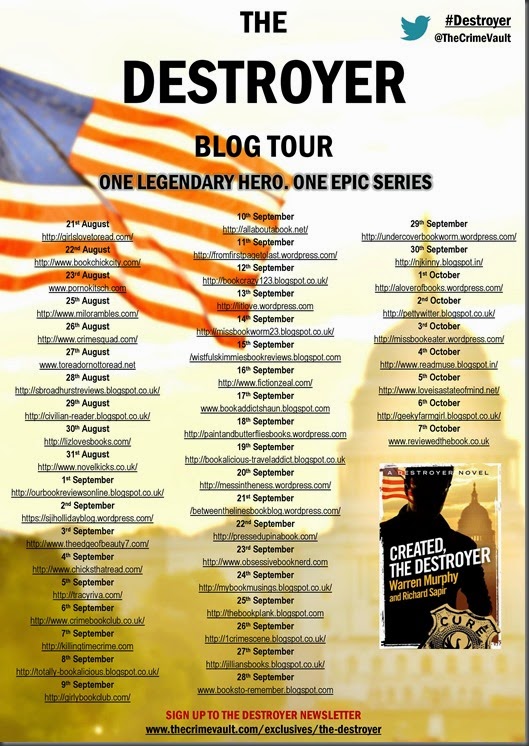