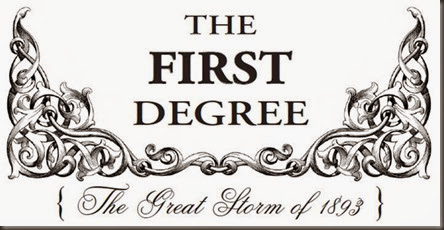 It was the evening of what would later be called the Great Storm of ’93, and Arthur Archibald Shaw sat at his usual desk in the Reading Room of the British Museum, yawning and toying with his pen. Soft rain pattered on the dome. Lamps overhead shone through a haze of golden dust. Arthur yawned. There was a snorer at the desk opposite, head back and mouth open. Two women nearby whispered to each other in French. Carts creaked down the aisle, the faint tremors of their passing threatening to topple the tower of books on Arthur’s desk, which concerned explosives, and poisons, and exotic methods of murder.

He was writing a detective story. This was something of an experiment. Not knowing quite how to start, he’d begun at the end, which went:

That night the dome of St. Paul’s Cathedral broke through London’s black clouds as if it were the white head of Leviathan rising from the ocean. The spire and the cross shone in a cold and quite un-Christian moonlight, and diabolical laughter echoed through the night. The detective and his quarry stood atop the dome, beneath the spire, each man ragged from the exertion of their chase.

“Stop there, Vane,” the detective called; but Professor Vane only laughed again, and began to climb the spire. And so Dr Syme pursued. 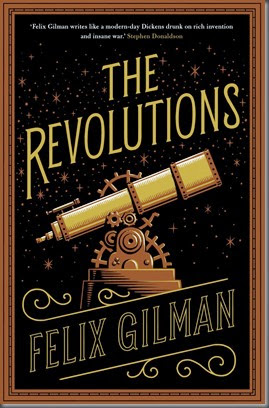 Which was not all bad, in Arthur’s opinion. The important thing was to move quickly. It was only that month that Dr Conan Doyle had sent his famous detective off into the great beyond — chucking him unceremoniously from a waterfall in Switzerland — and the news that there would be no more stories of the Baker Street genius had thrown London’s publishing world into something of a panic. In fact, there were nearly riots, and some disturbed individuals had threatened to torch the offices of the Strand Magazine. The hero’s death left a gap in the firmament. The fellow who was first to fill it might make a fortune. It was probably already too late.

For the past two and a half years Arthur had been employed by The Monthly Mammoth to write on the subject of the Very Latest Scientific Advances. He wasn’t any kind of scientist himself, but nobody seemed to mind. He wrote about dinosaurs, and steam engines, and rubber, and the laying of transatlantic telegraph cables; or how telephones worked; or the new American elevators at the Savoy; or whether there was air on the moon; or where precisely in South America to observe the perturbations of Venus; or whether the crooked lines astronomers saw on the fourth planet might be canals, or railroads, or other signs of civilization — and so on. Not a bad job, in its way — there were certainly worse — but the Mammoth paid little, and late, and there was no prospect of advancement there. Therefore he’d invented Dr Cephias Syme: detective, astronomer, mountain-climber, world-traveller, occasional swordsman, et cetera.

Vane dangled by one hand from the golden cross, laughing, his white hair blowing in the wind. With the other hand he produced a pistol from his coat and pointed it at Syme.

“What brought you here, Syme?”

The Professor appeared to expect an answer. Since Dr Syme saw no place to take shelter, he began to explain the whole story — the process by which, according to his usual method, he had tackled each part of Vane’s wild scheme — how he had ascended that mountain of horrors — from the poisoning at the Café de L’Europe, to the cipher in the newspaper advertisements that led to the uncovering of the anarchists in Deptford, which in turn led to the something or other by some means, and so on, and thus to the discovery of the bomb beneath Her Highness’s coach, and thus inevitably here, to the Cathedral.

The notion of the struggle on the dome had come to him in a dream, just two nights ago; it had impressed itself upon him with the intensity of a lightning flash. Unfortunately, all else remained dark. How did his detective get there? How precisely had they ascended the dome (was it possible?). And above all: what happened next?

Nothing, perhaps. In his dream, Dr Syme fell, toppling from the dome into black fog, nothing but hard London streets below. Not the best way to start a detective’s adventures. Something would have to be done about that. Perhaps he could have poor Syme solve his subsequent cases from the afterlife, through the aid of a medium.

Dr Syme lunged, knocking the pistol from the Professor’s grip, but his enemy swung away, laughing, and drew from his coat a new weapon: a watch.

“We have time,” the Professor said. “Dr Syme, I confess I have arranged events so that we might have time and solitude to speak. I have always felt that you, as a man of science, might see the urgent need for reform — for certain sacrifices to be made —”

Arthur’s neighbour began to pack his day’s writings into his briefcase. This fellow — name unknown — was stand-offish, thin, spectacled. Judging from the pile of books on his desk, on which words like clairvoyance and Osiris were among the most intelligible, his interests tended to the occult. He closed his briefcase, stood, swayed, then sat back with a thump and lowered his head to his desk. Arthur sympathised. The dread hour and its inexorable approach! Soon the warders would come around, waking up the sleepers, emptying out the room, driving Arthur, and Arthur’s neighbour, and the French women, and all the scholars and idlers alike out to face the night, and the rain, and the wind that rattled the glass overhead.

Midnight! The Professor waited, as if listening for some news to erupt from the befogged city below.

“Well,” Syme said. “I dare say I know your habits after all this time. I know how you like to do things in twos. I knew there would be a second bomb. At the nave, was it, or the altar? I expect Inspector Wright’s boys found it quick enough—”

A terrible change came across the Professor’s face. All trace of civilization vanished, and savagery took its place—or, rather, not savagery, but that pure malignancy that only the refined intellect is capable of.

Howling, the Professor let go of the cross and flung himself onto Dr Syme.

Pens scratching away. Rain drumming on the glass, loudly now. A row of women industriously translating Russian into English, or English into Sanskrit, Italian into French. Arthur’s neighbour appeared to have fallen asleep.

Arm in arm, locked together in deathly struggle, the two men fell — rolling down the side of the dome — toward

“By God,” said Inspector Wright, hearing the terrible crash. He came running out into the street, to see, side by side, dead, upon the ground —

Arthur put down his pen, and scratched thoughtfully at his beard.

His neighbour moaned slightly, as if something were causing him pain. Concerned, Arthur poked his shoulder.

The man jumped to his feet, staring about in wild-eyed confusion; then he snatched up his briefcase and left in such a hurry that scholars all along the rows of the Reading Room looked up and tut-tutted at him.

Rain sluiced noisily down the glass. Lamps swayed in mid-air. Thunder reverberated under the dome as the Reading Room emptied out.

Arthur’d thought he might try to bring out his friend Heath for dinner, or possibly Waugh, but neither was likely to venture out in that weather. Bad timing and bloody awful luck.

He collected his hat, coat, and umbrella. These items were just barely up to the Reading Room’s standards of respectability, and he doubted that they were equal to the challenge of the weather outside. Certainly the manuscript of Dr Syme’s First Case was not — he’d left it folded into the pages of a treatise on poisons.

Outside a small band of scholars, idlers, and policemen sheltered beneath the colonnade. Beyond the colossal white columns, the courtyard was dark and the rain swirled almost sideways. In amongst it were stones, mud, leaves, tiles, newspapers, and flower-pots. Some unfortunate fellow’s sandwich-board toppled end-over-end across the yard, caught flight, and vanished in the thrashing air. Arthur’s hat went after it. It was like nothing he’d ever seen. A tropical monsoon, or whirlwind, or some such thing.

He was suddenly quite unaccountably afraid. It was what one might call an animal instinct, or an intuition. Later — much later — the members of the Company of the Spheres would tell him that he was sensitive, and he’d think back to the night of the Great Storm and wonder if he’d sensed, even then, what was behind it. Perhaps. On the other hand, anyone can be spooked by lightning.

He was out past the gates, into the street, and leaning forward into the wind, homewards down Great Russell Street, before he’d quite noticed that he’d left the safety of the colonnade. When he turned back to get his bearings, the rain was so thick he could hardly see a thing. The Museum was a faint haze of light under a black dome; its columns were distant white giants, lumbering off into the sea. The familiar scene was rendered utterly alien; for all he could tell, he might not have been in London any more, but whisked away to the Moon.

His umbrella tore free of his grip and took flight. He watched it follow his hat away over the rooftops, flapping like some awful black pterodactyl between craggy, suddenly lightning-lit chimneys, then off who-knows-where across London.

The Revolutions by Felix Gilman is published tomorrow in the UK by Corsair.