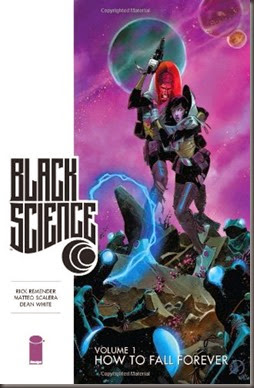 Grant McKay has done the impossible! Using the Pillar, he has punched a hole through the barriers between dimensions, allowing travel to all possible universes. But now Grant and his team are trapped in the folds of infinity, the Pillar sending them careening through a million universes of unimaginable adventure, sanity-flaying danger and no way home…

I wasn’t sure what to expect from Black Science. It received a healthy amount of pre-publication buzz – not surprising, given that it’s written by Remender (Deadly Class, Low, Captain America, Uncanny Avengers). Things move pretty quickly in this book, as readers are thrown straight into the action, which never lets up. The series includes everything you might want from a multi-dimensional action/adventure: strange and dangerous situations, back-stabbing, a larger conspiracy, weird and wonderful fauna, interesting technology. It also has everything we have come to expect from Remender: excellent story-telling and well-rounded, diverse characters. The story builds quite excellently over the course of the book, and I felt myself sink in as it took hold completely.

I want to avoid going into too much detail, as things move very fast. Grant is an interesting character, and readers will become invested in his quest and fate, just as they will for the fates of his companions. (Spoiler: not everyone’s going to get out of this one alive…)

Scalera’s artwork is a little strange, quite angular, but by no means unattractive. He does a great job of giving Remender’s story life, merging the weird and scientific excellently. It’s an eye-catching book, certainly.

Overall, then, a highly recommended new series for every fan of science fiction, sci-fi comics, and interdimensional story-telling. This was a lot of fun. I really can’t wait for volume two!