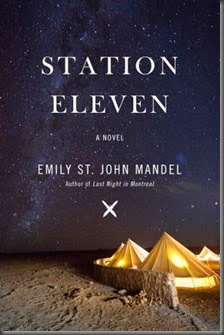 One snowy night Arthur Leander, a famous actor, has a heart attack onstage during a production of King Lear. Jeevan Chaudhary, a paparazzo-turned-EMT, is in the audience and leaps to his aid. A child actress named Kirsten Raymonde watches in horror as Jeevan performs CPR, pumping Arthur’s chest as the curtain drops, but Arthur is dead. That same night, as Jeevan walks home from the theater, a terrible flu begins to spread. Hospitals are flooded and Jeevan and his brother barricade themselves inside an apartment, watching out the window as cars clog the highways, gunshots ring out, and life disintegrates around them.

Fifteen years later, Kirsten is an actress with the Traveling Symphony. Together, this small troupe moves between the settlements of an altered world, performing Shakespeare and music for scattered communities of survivors. Written on their caravan, and tattooed on Kirsten’s arm is a line from Star Trek: “Because survival is insufficient.” But when they arrive in St. Deborah by the Water, they encounter a violent prophet who digs graves for anyone who dares to leave.

I was rather nervous, coming into this novel. It’s received so much attention and advance praise, that I feared inevitable disappointment. Instead, I find the hype entirely justified. This is an absolutely marvellous novel: beautiful prose, excellent pacing, an engaging plot, and well-rounded, sympathetic characters. A must-read of the year. If you only read one dystopian/post-apocalypse novel, make it Station Eleven.

So, how to review a novel that you loved without gushing? Without spoiling all the good bits? Succinctly, I think, is the answer.

The novel spans decades, but moves the narrative back and forth between moments during, after and before the collapse of society. The collapse, caused by a hyper-virulent strain of flu, the “Georgian Flu”, is well-presented and realistic. Life afterwards is likewise interestingly portrayed – it is by no means glamorised or sensationalised, but nor is it so bleak as to lead the reader to despair. In fact, it’s a rather depressing collapse. There’s no great calamitous event, just a rapid culling of the human population resulting from the flu. At first, I wondered if the back-and-forth nature of the narrative might be a bit frustrating, but it’s actually expertly done – the breaks and changes are very well-chosen, and the flow was never upset. 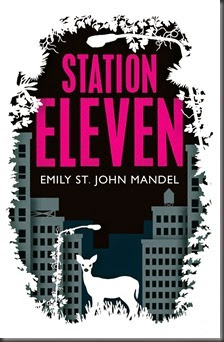 Life afterwards is hard. In the earlier chapters of the book, I was concerned that many of the elements of the world Mandel created were well-worn and overly-familiar for the sub-genre (the virus itself, the solitude, the presence of pseudo-religious-doomsday preachers, etc.). But what kept me going was the author’s prose – it’s superb. Inviting, engaging, and beautifully crafted, at no point was I bored. I didn’t notice any clunky phrases, nor cliché. She also does a very nice job of showing something of the differences in perspective between those born before and after the pandemic – what they miss, what they remember and slowly forget. Mandel has a gift for creating realistic and sympathetic characters and getting the reader into their heads.

The story’s various threads are all ultimately connected, as the characters – all of whom have a connection to Arthur – make their way through life pre- and post-pandemic. Whether it is the impact of Arthur’s marriages and divorces; Jeevan’s experiences at the very beginning of the collapse (he disappears for a bit of the novel, though, which was unfortunate), watching the TV networks slowly go dark; and as Kirsten navigates her life with the traveling symphony only to be separated and finds herself caught in the net of a self-proclaimed prophet. Speaking of the prophet, I liked the way his identity only slowly became apparent.

This review doesn’t come close to doing the novel justice. To sum up: I loved it. Everything worked beautifully, and I never wanted to put it down. I read it well into the wee hours of the morning on a couple of occasions – but for work and other commitments, I’m sure I would have devoured it in a couple of long, delightful sittings.

A must read of 2014, this is very highly recommended.

P.S. I loved that Mandel included a scene that mentions Calvin & Hobbes.

Station Eleven is published in the US by Knopf (who provided my ARC, via Edelweiss) and Picador in the UK.