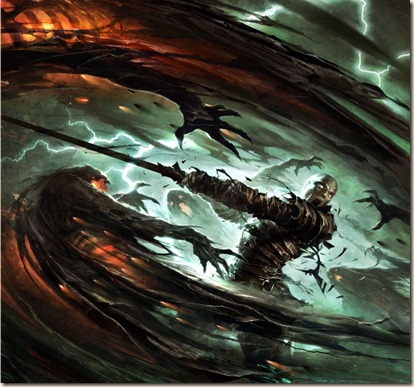 Paul Kemp is a very busy author, writing in a number of franchised fantasy settings – including Star Wars, Forgotten Realms and Warhammer – as well as his own, new fantasy series featuring the rogues Egil & Nix. I’ve read a few of his novels, including the upcoming The Hammer & the Blade (which is great), and I wanted to find out more about his writing, so I fired over some questions…

I thought I’d start off this interview with something easy: Who is Paul S. Kemp?

Paul S. Kemp is an alien being beyond earthly ken. His true form is a horrible, tentaculous spheroid terrifying to behold. In that form, he enjoys feasting on human souls, taking undulating ambulations along the beach, and watching Dr. Who. Oh, and nachos. He also likes nachos.

When in my human form, however, I’m a father of three young children (twin boys and an infant daughter), a lawyer, and a generally amiable dude. I geek out on all the usual things:  D&D, Firefly, Star Wars, board games, video games, and the like. I like good whiskeys and good beer and good company. I am occasionally amusing. When I’m not, I make others uncomfortable. When their discomfort makes me uncomfortable, I shift into my natural form and consume their souls. With nachos.

Your latest novel, The Hammer & the Blade will be published by Angry Robot Books in July 2012. How would you introduce it to a new reader?

You know, when I was young and first started reading masters like Leiber and Howard and Moorcock, I was struck with the pure sense of joyous wonder that poured from the pages. The stories of Conan, and Elric, and Fafhrd and the Mouser struck me as completely unabashed tales of glorious adventure. I felt the same way when I saw the first Star Wars film and Raiders of the Lost Ark. It’s magic. There’s a glee in those stories and films, an unstated invitation to the watcher/reader to grab hold of their seat, slap on a smile, and come along for what promises to be a spectacularly fun ride. 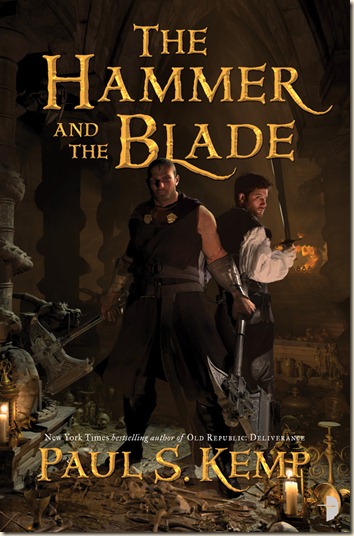 The Hammer and the Blade is my attempt to tell a story like that, a tale that is unabashedly, unapologetically, a great adventure story – pacey, with cracking dialog and compelling characters, with both dark moments and laugh out loud moments sprinkled liberally throughout. I hope I managed to do it, and I hope it evokes in someone the same glorious sense of fun that Leiber, Howard, and Moorcock’s work did for me.

The Hammer and the Blade is the most fun I’ve had writing a novel (and I’ve had fun with all my books). I hope that shines through. This book has all the darkness/grittiness that I’m known for (at least I think I’m known for it), but with ample humor, too. Egil and Nix are a fun pair.

I’ll add as a kind of coda that while it’s true that my primary focus was, first and foremost and always, on telling a positively ripping yarn, I still tried to do something interesting with one of the foundational tropes of sword and sorcery fiction. I’ll leave it to readers to decide if I actually did.

Where did the inspiration for the story come from? Will it be part of a series?

Inspiration is a tough thing to pin down. I draw it from everywhere: history, television shows, books, movies, even real life (gasp!). The Hammer and the Blade obviously owes much to Leiber (and Howard and Moorcock to a lesser degree, and to the Indiana Jones films to a still somewhat lesser degree), so I suppose direct inspiration comes from there.

This is, indeed, the first book in a series. The next novel, A Discourse in Steel, will release next year. I’m hoping to write many Egil and Nix stories.

You’ve also written a number of tie-in novels – for Star Wars and Forgotten Realms – what are the challenges of writing tie-in fiction, and how did you find the experiences? 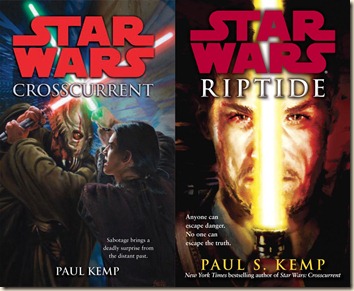 In a word, it’s been great. The main challenges are two: First, grokking the details of the setting. There’s an enormous amount of lore established for the Realms and the Star Wars galaxy. You need to have a handle on that to write well in the setting. Second, you’ve got to write a story that vibes with the setting to some degree, while still (hopefully) putting your own stamp on it. In my case, that’s been relatively easy in both the Realms and the Star Wars galaxy, and mostly that’s due to the fact that (a) I love both settings and have a good feel for their respective vibe; and (b) my editors in both lines have essentially said, “What do you want to write about?”

Given that last, writing tie-in in the Realms and the Star Wars galaxy has been little different for me than I imagine it was for the writers who wrote in the shared setting of Sanctuary, in the Thieves’ World anthologies. There are some givens associated with the underlying setting, true, but (at least in my case so far), there have been no substantive constraints on my storytelling. I’ve been able to tell the stories I want to tell, using characters of my own creation. I know some tie-in properties are handled differently (i.e., there are many more constraints), so maybe I’ve just been lucky.

On top of that, the fans of both settings are wonderful. 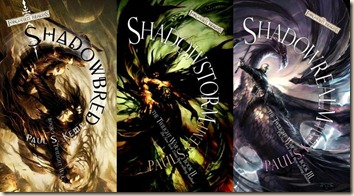 How did you get into writing for these franchises? Any advice for aspiring authors who’d like to break into writing tie-in fiction?

For the Realms, I submitted writing samples to Wizards of the Coast’s book division way back in ’99. They had an open door policy back then (they don’t anymore). The editor liked what he read, asked me to pitch something for a series they were planning, and viola! Erevis Cale, priest and assassin, was born. And many books later, here we are.

For Star Wars, I sent Shadowbred, one of my Erevis Cale novels, to the line editor. She liked it and asked me to pitch a Star Wars novel. I did and voila! Jaden Korr hit the page. 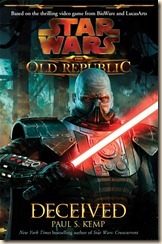 As for advice: I’ll say at the outset that I seldom give it. I think every writer’s path to publication is so different that offering dos and don’ts is usually unfruitful for those hearing it. These days, I think most of the big tie-in lines recruit established authors, rather than new authors, but an aspiring writer should keep an eye out for open calls, network, and just… keep… writing. If you love it, can’t stop doing it, and continually strive to improve, you might just get there.

By my fifth grade teacher, Joe Murphy. He gave me A Wrinkle in Time and then The Hobbit and then The Lord of the Rings. I was all-in at that point, you better believe. From there I went on to Leiber, Moorcock, Howard, Donaldson, Eddings, Brooks, all the big names from that period. It was great.

I don’t read as much genre as I should these days. Part of that is due to the fact that when you write it for a living, you tend to deconstruct the work as you go, and that’s unhelpful to the reading experience. Still, I’m looking to remedy that this year, and read more genre stuff.

I love it, man, or I wouldn’t keep doing it. Like anything, there are frustrations, but the great stuff more than compensates for it. I’ve gotten emails from readers fighting horrible illnesses, emails from veterans of Iraq and Afghanistan, telling me that my stories brightened their days, helped them pass the time, whatever. What could be better than that?

I think writing professionally is a bit like getting paid to give a full-body massage to a person you find lovely: It’s so much fun, you’d do it for free. That you get paid to do it is, well, it’s awesome.

It was one of those dreams that was there a long time, something I’d toy with, but I only decided to pursue it seriously after my first year of law school. And that’s because I hated law school (love being a lawyer, though; odd, no?). My first professional sale was to an online magazine (mind, this was a time when online magazines and the genre community were nothing like what they are today) called (IIRC) “Dragonscroll Magazine.” It was great to get that first check. I suppose I do look back on it with fondness.

“Genre” is doing a lot of work in this question, yes?

I’m hardly the ideal candidate to discuss the state of the genre (as I mentioned, I don’t read as much of it as I should), but it looks to me to be extraordinarily robust and diverse, and that’s a great thing. I sometimes (SOMETIMES) think that genre authors take themselves a tad, just a tad, too seriously, and forget that genre stories ought to be fun (and I say that realizing that we all have different meanings for “fun”). Genre should be teaching us to dream big, to open our imaginations, and, perhaps most importantly, nurturing a sense of wonder. Many genre authors still do that very well. I hope I’m one of them.

I don’t think too much about where I fit in. I’m just a storyteller and I try to spin tales with emotional weight, with characters you love and/or hate, with pacing that keeps you turning pages, and hopefully with scenes that make you wince and/or grin. I don’t want to over-intellectualize it much more than that because I fear that will lead to my stories getting constipated and self-conscious. I sometimes sense this yearning among some reviewers and some authors for genre fiction to be considered “literary.” I don’t share that yearning. In fact, I think it runs at cross-purposes to my view of what genre fiction should do and does well. Genre fiction is what it is, and what it is, is wondrous.

Oh, man, this brother is swamped!

I’ve got the sequel to The Hammer and the Blade, called A Discourse in Steel, which will release next year. I’ve got a hardcover duology set in the Star Wars galaxy (subject matter to be revealed when I can). And I’ve got the next instalment in the Chronicles of Erevis Cale, entitled Godborn. I try to fit small projects between those when I can.

It’s good to be busy, especially when you’re writing stuff you love.

In non-fiction, I’m reading Behind the Beautiful Forevers, which is a narrative account of the lives and hopes of the residents of a Mumbai slum. Powerful stuff.

In fiction, I just finished a sampling of the Vandermeers’ The Weird Anthology (which is great) and I’m moving on to Chuck Wendig’s, Blackbirds (really looking forward to it).

How about this: I can hit an ordinary core softball 350 feet and I hate speaking in public. Hate it.

The Hammer & the Blade will be released in July 2012 by Angry Robot Books.