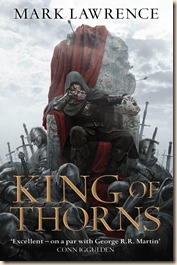 The Broken Empire burns with the fires of a hundred battles as lords and petty kings battle for the all-throne. The long road to avenge the slaughter of his mother and brother has shown Prince Honorous Jorg Ancrath the hidden hands behind this endless war. He saw the game and vowed to sweep the board. First though he must gather his own pieces, learn the rules of play, and discover how to break them.

A six nation army, twenty thousand strong, marches toward Jorg’s gates, led by a champion beloved of the people. Every decent man prays this shining hero will unite the empire and heal its wounds. Every omen says he will. Every good king knows to bend the knee in the face of overwhelming odds, if only to save their people and their lands. But King Jorg is not a good king.

Faced by an enemy many times his strength Jorg knows that he cannot win a fair fight. But playing fair was never part of Jorg’s game plan.

This is a tricky novel to review. I really want to steer clear of spoilers (some are unavoidable, though), so I’m going to keep this relatively short. I’ve been looking forward to King of Thorns ever since I finished Prince of Thorns. It’s an ambitious novel, one that works very well, despite a couple of concerns I had about the beginning. If you enjoyed Prince of Thorns, then you should enjoy this, but expect a story of considerably greater scope and complexity.

[Warning: there are some minor, unavoidable spoilers for Prince of Thorns in this review.]

I’ll get my concern out of the way, first, and that is about the novel’s narrative structure. While Prince of Thorns felt hyper-focused, Lawrence takes a more creative approach to story-telling in this novel, using a non-linear structure. This is no bad thing, of course, but it did mean it took me longer than anticipated to get swept up by the story. There’s a fair bit of jumping around in time at the start, as well as a tricky memory-device that caused just a little confusion. Because of this, I would recommend you carve out some time to read the first third, and not do what I did – i.e., read it on the subway, and in between meetings and events, when I was pretty much rushed off my feet. When I was able to sit down and read this for long periods of time, I sunk in and devoured huge chunks of the book. When I was dipping in and out, though, I found I kept having to re-orient myself. So, this is a novel to savour and wallow in. If you do that, you’ll definitely be rewarded.

The novel is split into three narrative threads. The first, where the novel starts, is “Wedding Day”; the second is “Four Years Earlier”, which is effectively just a short while after Prince of Thorns; and the final thread is comprised of diary entries from Katherine Ap Scorron, who readers will remember from Prince of Thorns. This structure didn’t always work for me, as it is a lot more complex than the previous book. However, the reasoning behind it does become apparent as we read more – the book’s final third is packed full with revelations.

Jorg is set to be married to a young woman he’s not particularly interested in, in order to shore up support for his cause, as well as begin to secure his royal line. An all-conquering army is headed his way, and he must do everything he can to protect not only his kingdom but also his life. The novel details not only the ‘present day’ conflict, but also Jorg’s plans, which he has been preparing for years. With the help of his remaining road “brothers”, he travels the land in search of allies and also help for a couple of his companions [who will remain nameless in order to not spoil certain events of Prince of Thorns].

As the novel progresses, Lawrence does a great job of bringing the past and present threads together, and there were plenty of revelatory moments when some past action clicked into place and we see just how devious and strategic Jorg really is. There were many moments when I was pleasantly surprised to see how his long-game preparations would be executed.

Our protagonist, Jorg, has grown since book one – in age as well as emotionally and psychologically. He has mellowed just a little, but he is haunted by some of his past acts, as well as strange snippets of memory he can’t fully recall. I found him far less creepy, less cold, and more thoughtful. (That being said, he still has some delightfully dark, vicious moments.) He is getting the hang of “kinging it” after the events that closed Prince of Thorns (although he finds a lot of it a real pain in the arse). As with all of Jorg’s musings and observations, his thoughts on kingly business is equally amusing.

“The men cheering Miana and me, waving their swords, bashing their shields and hollering themselves hoarse, might have told anyone who asked how proud they were to fight for his highness and his new queen. The truth, however, is that at the bottom of it all they simply didn’t want the men of Arrow marching all over their rocks, eyeing up their goats, and maybe leering at their womenfolk.”

We don’t know much about Jorg’s fiancée at the start of the novel. She is very young, seems rather meek and timid, and Jorg makes no attempt to hide his lack of enthusiasm for the match, and seems inclined to dismiss her. However, as we spend more time with her (predominantly near the end), we realise that despite her very young age, she could well be a perfect fit for Jorg. He starts to think quite well of her, despite how uncomfortable he is at marrying someone so young – she “may have had the mind of a she-pirate but she looked like a child.” She doesn’t feature as much as I would like, but I think she has the makings of a really interesting character.

In the first third of the novel, the scene that generated the most emotional, visceral reaction in me was one of Jorg’s memories, of a “lesson” his sadistic father taught him. His methodology is utterly cruel, and I don’t think I’ve ever been made to hate a character so much. It’s almost no wonder Jorg grew up to be the boy he was, and the man he is now becoming.

He's starting to struggle with some of his past acts, as well as some of the results of his early rashness and impetuous youth. The aforementioned strange memory-aspects of the structure creates some confusion for Jorg as well as the reader, as he only remembers partial events. That being said, when the memories click into place, and we get the full picture of what has happened to Jorg, we are rewarded with some very interesting revelations, as well as a couple of devastating mistakes.

The world Lawrence has created is great. It’s a very-far-future of our own world, but everything has been radically changed. Trying to spot and figure out what Jorg or another character is talking about, or which region they are travelling through, is quite a fun element of the story. It’s done very well indeed.

The banter between Jorg and his brothers and companions is, as with Prince of Thorns, very well written. There are plenty of cynical, sarcastic and otherwise amusing comments (“the elephant of surprise” is a personal favourite), exchanges, and asides. For example:

“She’s going to kill you all either way, Rike. She’ll have your corpse walking beside her. Price on one side, you on the other, the brothers back together again.”

There are some parts of the novel that I really enjoyed, but to discuss them would be spoiling so many things (which sounds like a horrendous cop-out, but it’s true). Suffice it to say, it’s interesting to see Jorg meet other members of his family, lead a battle, and comment on his companions (not always quietly or to himself). But, one thing I definitely should say is that the final 100 pages are absolutely superb. I was gripped throughout, and it’s a great denouement that left me impatient for book three, and forgiving of the re-entry issues at the beginning.

With King of Thorns, Lawrence shows that he has grown as a writer, and is taking this series in a more complex and epic direction. This novel isn’t as fluid or streamlined as Prince of Thorns, but it could be argued that it’s a better creation: the novel is grander and broader in scope, the structure and execution more ambitious, and Jorg’s continued development is very interesting. My hope is that Lawrence will be able to merge the strengths of his two novels into what would become an absolutely stellar third book.

Dark, complex, and inspired, this is definitely recommended, Lawrence is an author to keep watching, and I think I can safely say I will read anything he writes.

Posted by Civilian Reader at 5:09 AM