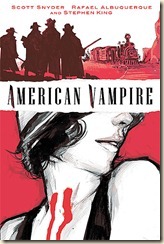 Vampirism Comes to America. And Evolves…

Introducing a new strain of vampire – a more vicious species, this series traces the creatures’ bloodline through decades of American history.

This book follows two inter-linked stories: one written by Snyder and one written by King. The first tale follows Pearl, a young woman living in 1920s Los Angeles, who is brutally turned into a vampire and sets out on a path of vengeance against the European monsters who tortured and abused her. The second story, set in the days of America’s Wild West, tells of the origin of Skinner Sweet, the original American vampire – a stronger, faster creature than any vampire ever seen before, with unique powers all his own, which set him not only apart from his European forebears, but maybe above them in the food-chain as well... I really enjoyed this.

There’s nothing pretty about these vampires. The main story, set in the 1920s, is interspersed with the vampire’s origin story. In Los Angeles, two aspiring actresses are rooming together and taking extras roles, living the dream, but still struggling to make an impact. One of these up-and-comers, Pearl, is invited by the hunky movie star to go to a party. Where a nest of vampires chow down on her. 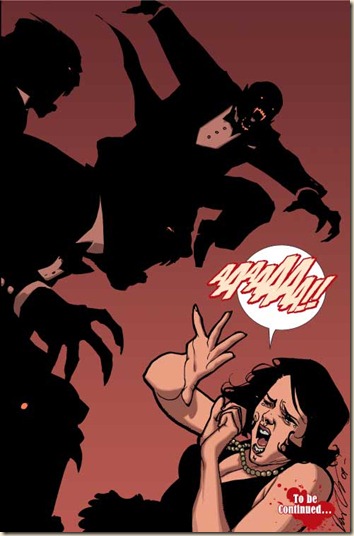 Skinner Sweet’s transformation into a vampire was an accident, basically. He was a vicious “outlaw killer [and] defiler of women”: when sprung from custody, he just happened to tussle with a vampire who accidentally turned him (rather ingeniously, actually). In the 1920s, Skinner takes pity on Pearl, turns her, and buggers off, leaving her to take care of her tormentors.

A lot of this book is fantastic, and I really liked the Western, Horror and historical elements of the story. (It reminded me of Brimstone, published by Zenescope, although American Vampire was published long before.) I did, however, find it rather difficult to accept that it took Skinner Sweet 29 years to escape his grave. That seems... Well, I’d say implausible, but we’re talking vampires, so that terminology is out. I think this could have been done a bit better. Nevertheless, when he does escape, his retribution is swift and extremely bloody, not to mention rendered in one of the most arresting images in the whole book. 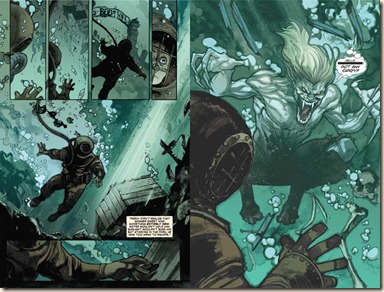 In this first volume, Snyder and King have given readers a near-perfect introduction to this species of vampire – there’s a lot of ground still to cover (yay!), and there were plenty of tantalising hints for stuff that will no doubt by revisited in the future.

The artwork’s awesome – it’s atmospheric, gritty, and it really enhances the horror of Skinner, his acts of violence, and the other vampires. Also, the critical portrayal of what humans can do to each other (which is, after all, much of what a vampire is oftentimes – the exaggeration of our worst, most selfish qualities), is very nicely woven into the story.

Despite a couple of narrative niggles, I really enjoyed this, and I hope to catch up with the series in the near future. Definitely recommended to all fans of vampires, horror, comics, and Snyder’s other work.