I Ask You: “Should You Read What You Write?” by Matthew Griffiths 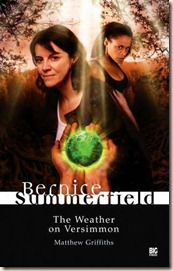 An extra instalment to last week’s “Should You Read What You Write?” survey-post.

Full disclosure: Matthew and I attended Durham University at the same time. He is a marvellous fellow, and extremely gifted, so if you’re a fan of Dr Who, I would certainly recommend you read his work.

Should you read what you write? You can’t not; but you can’t read that alone. I’ve published poems, short stories and, somewhat to my surprise, a novel, and I hope this diversity of genres means I can bring something fresh to one from another. Although it could also mean (to paraphrase Margaret Atwood) feeling the need to tell novelists you’re really a poet, and poets you’re really a novelist. It might even be better if I tell both parties that I’m really a PhD student.

You can’t know what your distinctive qualities are until you know what you’re distinguishing yourself from, so it’s best to be familiar with your genre or field. Otherwise, you could go round thinking you’ve had the best idea ever, without realising Ray Bradbury did it 50 years ago (he probably did). If you only find this out in retrospect – let’s face it, very few people can read absolutely everything – you’ll have to content yourself with the notion that some ideas are just waiting in the ether for someone to channel them, and you’re fulfilling that role in your generation – it’s a responsibility, but, hey, someone has to do it. A friend recently found a poem he claimed had ripped off one of his, albeit 20 years in advance; I tried to mollify him by suggesting I’d popped the draft of his into a handy time-warp for the benefit of his anachronistic plagiarist.

Most of my published fiction has tied-in with Doctor Who, so more technical reasons for reading where you write – being familiar with the characters and other background for your series – hasn’t been too problematic for me. And though I was not acquainted with Bernice’s most recent adventures when I came to write The Weather on Versimmon, I’d spent enough time furtively reading her escapades in earlier years to be familiar with her universe, not to mention rather fond of the Professor herself. Looking at the scripts for her current audio outings brought me up to speed with her situation, and allowed me to work a couple of references to these in as I was writing.

Read what you write: it may not be an original sentiment, but it’ll make your sentiment original.

Inveigled into a survey of botanical art on Versimmon, Bernice is disappointed to get bogged down in an unseasonal cold spell – and to discover that Ruth has some radical ideas about how the living archive should be managed.

Why is a hailstorm bringing back memories of a war two generations gone? Where are Versimmon’s first animals appearing from? And who can Bernice trust on a planet full of budding artists?

As the forest world is bombarded by ice and the collection’s guards start disappearing, the archaeologists find themselves getting back to their roots and branching out into local politics. All the time, the weather on Versimmon is changing, and its inhabitants will find that revolutionary times demand revolutionary works of art…

Email ThisBlogThis!Share to TwitterShare to FacebookShare to Pinterest
Labels: Bernice Summerfield, Dr Who, I Ask You, Matthew Griffiths, Sci-Fi, Should You Read What You Write, Weather on Versimmon