Guest Post: “The Not So Secret Origins of the Multiverse” by Ira Nayman

A little while back, I was contacted by Canadian author Ira Nayman about a possible review. As you may know, I am usually wary of self-published works, but Ira amused me, so I asked if he would like to write a little piece to introduce his series. 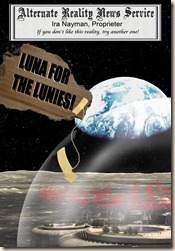 As I write this, I have published three collections of Alternate Reality News Service (ARNS) stories (Alternate Reality Ain’t What It Used To Be, What Were Once Miracles Are Now Children’s Toys, and Luna for the Lunies!). In addition, I have produced the pilot for a radio series based on stories out of the first two books: “The Weight of Information, Episode One” can be heard, in two parts, on YouTube. Most weeks, at least one new ARNS article appears on my Web site, Les Pages aux Folles; as I tell people at science fiction conventions, if they check my Web site regularly, they can watch the fourth and the fifth ARNS books take shape (they should be finished and collected in print some time next year). I am also have another novel, Welcome to the Multiverse – Sorry for the Inconvenience, which builds on some of the ideas introduced in the Alternate Reality News Service books; fingers crossed, that will also be available next year.

Readers new to my fictional multiverse – which, let’s be honest, will be pretty much all of you – come to a fully formed fictional reality. But, of course, when I originally conceived of the Alternate Reality News Service around six years ago, I had no idea that this was where it would lead.

In fact, the Alternate Reality News Service began as a minor part of a completely different feature on my Web site: The Daily Me. This feature is a riff on an idea first proposed by MIT’s Nicholas Negroponte: bots that know what your interests are search the Internet for the most satisfying articles, then put together a newspaper uniquely geared to information you want. The Daily Me. My version usually contains between six and 12 items, each with its own headline and source (usually a parody of a specific news and/or Internet outlet). This weekly feature has allowed me to cover a lot of different subjects and is invariably the most topical piece of writing on my Web site.

One week, one of the Daily Me articles had a science fictiony/ alternate universal vibe, so I created the Alternate Reality News Service in order to have a source that reflected that. At the time, it was just one of about 70 or 80 different sources I used as needed (I now have over 120). After writing over a dozen ARNS bits for the Daily Me, it occurred to me that the Alternate Reality News Service could offer new creative opportunities for me if I spun it off into its own feature. To that point, I had written two or three fake news articles for my Web site, so the form wasn’t exactly new to me, and I decided to try it. 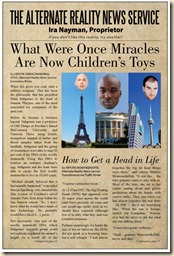 Over time, the Alternate Reality News Service has grown (I believe it is important for a writer to be constantly challenging himself or herself to try new things, which results in her or his work constantly evolving). Although the idea of beat reporters was inherent in the original idea, I add new ones as needed. In addition to straight news, ARNS now also features: interviews; opinion pieces; Lives Unlived (a parody of Lives Lived, an obituary feature in Canada’s national newspaper, the Globe and Mail); two advice columns (Ask Amritsar and Ask the Tech Answer Guy), and; a behind-the-scenes narrative told between chapters of the two most recent books. As I now explain to people, the Alternate Reality News Service is a full service news service.

Like the Joker, I don’t plaaaan… anything. I didn’t set out to write a series of science fiction books in a strange format. Each article in the series was written to fulfil my creative urge at the moment it was written; it is only by looking at the Alternate Reality News Service as it is currently constituted that we can see that each piece is like a steel beam in a condominium project. (NOTE: if you don’t live in a city like Toronto that is in the midst of a condo building frenzy, brick in a wall might be a more understandable metaphor.) For this reason, it was only as the project grew that some of its pros and cons became apparent.

One of the first articles I wrote for my Web site (which was a continuation of a print project that I started in 1984) was called “The Man Who Makes Fun of Everything.” In it, I stated that my goal was to satirize everything I could wrap my imagination around. The short short article format of Les Pages aux Folles (where most pieces of writing are under 1,000 words) affords me the opportunity to write about a wide variety of subjects. 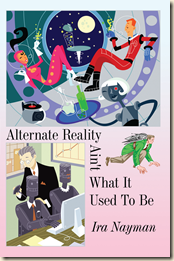 Throwing science fiction into the mix had some advantages for me. For one thing, it gave me a platform to write about science and technology, as well as changes in social relations that their development affords. For another, it gave me a set of metaphors (for example: aliens and alternate realities) which I could use for my comic purposes.

However, the format and content have drawbacks as well. The obvious one is commercial viability. As a rule, today’s science fiction publishers are, at best, indifferent, and, at worst, openly hostile to humorous science fiction. That is before we even talk about the fake news article format, which makes it virtually impossible to interest a publisher. For this reason, I have self-published the first three Alternate Reality News Service books, and expect to self-publish the next two. Being something of a control freak, I don’t mind this, except that many reviewers won’t touch self-published books, which has hampered my efforts to spread the word about my writing.

There is also the less obvious problem of my writing style. Not only does the short short format allow me to write on a lot of different subjects (each book contains 80 or so articles), but my humour is fractal, by which I mean that I inject humour at every level, from the overall concept to individual word choices, and everything in between. I think of my writing like rich chocolate cake: tasty in small doses, but after a while your taste buds can get dulled to its richness. This isn’t a problem when you read the articles in small groups over long periods of time on my Web site, but it can be overwhelming to people who try to read a book-full of them all at once. Charles de Lint, in his review of Alternate Reality Ain’t What It Used To Be, said that it was a good book to leave lying around the bathroom. While I may quibble with his assessment (a doctor’s waiting room, the subway, or any other place you have a short amount of time and don’t want to get wrapped up in a longer piece of writing are good ways of looking at it), I  fundamentally agree with it.

Still, as I say, I don’t plan, I go wherever my creativity takes me. Overall, I am happy with the journey so far, and look forward to where it will take me in the future. 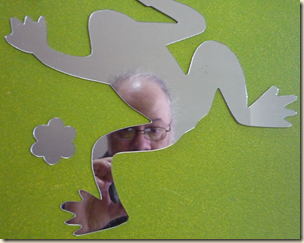