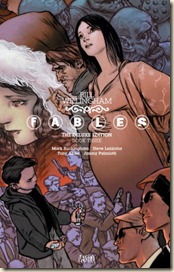 When Little Red Riding Hood suddenly reappears, she’s welcomed as a miraculous survivor by nearly everyone except her old nemesis, Bigby Wolf, who smells espionage and subversion. But will he be able to prove his case before disaster strikes?

Coming back for a third Deluxe collection of Willingham’s Fables, and I am once again impressed, entertained and hooked throughout. The book wasn’t quite as good as the first or second collection, but it was still very strong. This series goes from strength to strength, and I really love the world Willingham et al have created. Another great addition to the series.

There are two storylines included in this deluxe hardcover – “Cinderella Libertine” and the epic “March of the Wooden Soldiers”. Both are pretty awesome.

“Cinderella Libertine”: In which we learn about Cinderella’s true role in Fabletown. It’s not what you might expect, as are the things she’s willing to do for the job. This is a very cool interpretation and portrayal of the character. In addition, the chapters have the start of Fabletown political machinations, as characters start manoeuvring to run for Mayor.

“March of the Wooden Soldiers” (Ch. 1-8): Back at Fabletown, Prince Charming’s plans to run for mayor continue apace. And an old friend, long thought lost (dead, even), appears seeking asylum. This is a great, expansive story, that builds to a climactic battle on the streets of Fabletown, as an army sent by the Adversary lays siege to the Fable community. Gepetto has apparently been making wooden soldiers for the Adversary, who have been sent to Fabletown to install their own leader. They’re ready for war, and they are presented as rather amusing soulless, characterless, inflexible Government Agent-types. After the huge, climactic battle, we share in the Fables’ losses, and also their victory. It’s really brilliant.

I wanted to avoid mentioning politics, but there are a couple of interesting moments in this book. I won’t spell them out (it would spoil a couple of the jokes), but there’s a lot of all-purpose political humour sprinkled throughout this book, which was a nice surprise and should please all readers. Also, a sensible, surprising support for the three-day waiting period after purchasing a gun…

Buckingham’s artwork is great, and I particularly like how he draws Snow White and Bigby (in both human and wolf guises) – these two are great characters, and I like how their relationship is developing as the series continues. The peripheral characters are also getting fleshed out and made complete. It’s nice that almost every character has developed over the series – none of them are standing still, regardless of the importance of their role in the story.

This series is superb.