A bit more of a targeted selection of comics. A lot of fun ones, too: a great reinterpretation of a classic villain; two “heroes” fighting in the face of an alien invasion; zombies want to eat the braaainz of geeks; clandestine military outfits; some weirdness; and the families of super-heroes deal with a post-battle situation. I’ve been pretty busy and distracted all week, so I’ve only written short reviews – this is probably advisable, actually, as some of these are now a good way into their runs, so I don’t want to spoil too much. 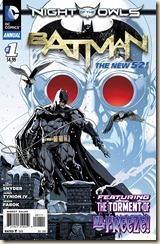 Mr. Freeze is introduced to The New 52. What is Mr. Freeze’s relationship to the Court Of Owls? Is he an ally, or do they want him dead?

Apparently, Victor Fries's formula is used to revive the Court of Owls' Talons. That’s the connection to the Night of the Owls cross-title event.

The issue starts with Freeze breaking out of Arkham (in a pretty cool sequence, proving just much of an evil genius he is), aptly portraying Freeze’s coldness (literal and metaphorical). He heads to his old lab, but his wife is missing. Instead, Nightwing and Robin are waiting for him, to tell him to get back in prison. Naturally, he declines.

This is an interesting take on Mr Freeze’s story, where his obsession with cold came from, and the truth about his wife, Nora. I really liked that Snyder and Tynion have taken what long-time fans of Batman will know about the villain and twisted it just enough that it is semi-familiar but also entirely new. It suits the tone of the New 52 Batman comics rather well. 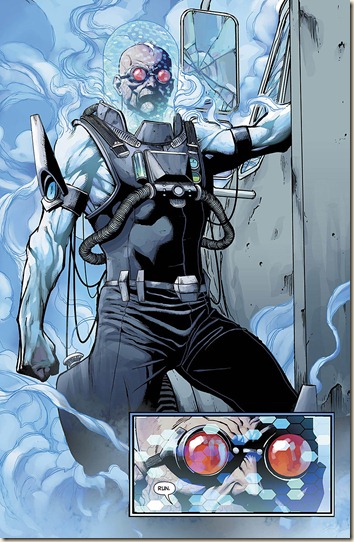 This is a fantastic annual. The story and artwork are excellent and work together very well, complementing each other nicely.

Even if you’ve not been following the Night of the Owls cross-title Batman event, then there’s plenty in here to entertain and satisfy every Batman fan. The Court of Owls is actually rather peripheral to the story (despite being mentioned a couple of times), so there’s no need to read the rest of the tie-in issues to appreciate this annual. 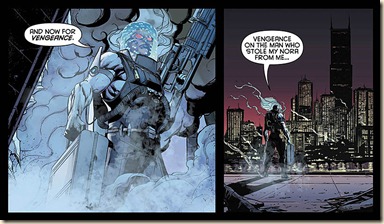 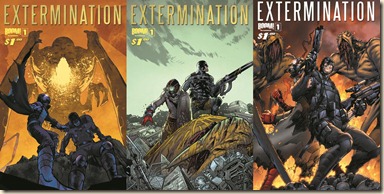 WE LOST. THEY WON.

In the wake of an apocalyptic alien invasion, the world’s greatest super-heroes and deadliest super-villains must form an alliance to prevent their own extermination. Two arch-enemies, Nox, a driven hero, and Red Reaper, a ruthless villain, form a volatile partnership for the greater good. The enemy of your enemy is your friend — but will they be able to ultimately put aside their bitter past to prevent global genocide? What happens when all the battle lines are redrawn and foes become unlikely allies in a desperate war for the fate of the very planet — and the outcome of a species?

So Si Spurrier is writing a new comic series. Count me in with bells on. I’m a huge fan of this writer’s twisted mind, and in Extermination, he’s come up with something pretty cool – blending super-heroes, post-apocalyptic dystopia, and an alien invasion into a delightful melange of sci-fi tropes and story-telling. It shares the tone of X-Club, in that tongue is planted firmly in cheek, but it’s not totally ridiculous – it works, and that’s the most important thing.

First up, we’re introduced to our two heroes – the former super-hero Nox, and the former super-villain Red Reaper (“moron in a super-suit” as he’s sometimes known). They are an interesting pair, with very different… well, very different everything. There’s a great dynamic between the two, as Nox’s sense of propriety creeps into their dialogue (constantly telling Reaper to watch his language, for example), while the Reaper remains rather self-involved and selfish. It’s an interesting examination of the difference between super-heroes and super-villains (particularly Batman, actually), and the lengths to which each will go for success, but also how that can hamper their ability to function properly in certain situations. 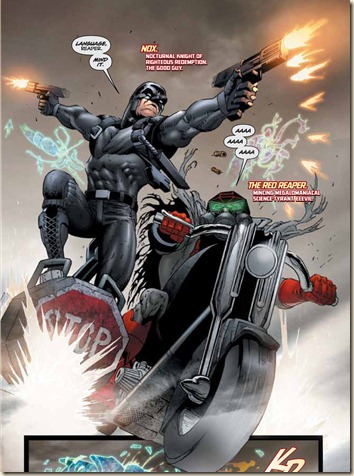 The story jumps back-and-forth between pre-invasion and post-invasion, giving us plenty of background on the world and its two new saviours. If you’re looking for something outside of the super-hero norm (something Boom are particularly good at giving us), then I think Extermination has the potential to be, well, just damned awesome.

Definitely recommended. I really enjoyed this, and can’t wait for issue two.

“Oh word, what are you doing here at Comic Con?”

“I’m gonna line up to see the Alien Family reunion.”

“I gotta go to Artists Alley and track down Mahfood.”

“You going to that Wolfbiter party later?”

“Actually, probably not, because I’m a zombie, and all you fools are already dead.”

WHO SAYS THIS ISN’T THE GOLDEN AGE OF ZOMBIES IN SAN DIEGO?! Not me. Because there probably won’t be a Silver Age.

So this continues to be a delightfully silly comic. The zombies are at their door, but they can’t resist geek-posturing or, worse, geeks-posturing-like-big-men… I love that the only two characters who can keep their eye on what’s going on are the girls, I like that the guys are all bumbling around and too busy trying to one-up each other in the realm of Inane Shit Nobody Gives A Damn About. I love that one of the girls has totally gone zombie-apocalypse-native and just wants to hack and chop her way through the horde. There’s great humour running throughout the comic, and it’s overall a lot of fun.

A must for any geek, anywhere, and everyone who loved Fanboys the movie. This is great fun. 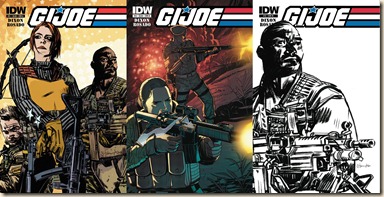 Deep Terror, Pt.2: Under-staffed, under water, and under the gun. The new stripped-down Joe team battles a very public Cobra as Dr. Mindbender drills on the ocean floor – but what’s he looking for? And how will Scarlett and her team escape?

Scarlett breaks free, which leads to a base-wide attempt to get her back before she does any irreparable harm to the Cobra installation. This wasn’t a bad issue, but it wasn’t the best, either. The story was a little slow, and it felt a little like it was treading water. There were a couple of amusing moments, though, and it ends on quite a good cliff-hanger. Not sure where this story’s going to go in the next issue, but I’ll be interested to see if they do anything with the storyline. The new quartermaster seems to be quite the character. I still enjoy the series, but as with all long-running series, this one seems to be going through a bit of a down-spell. I’m sure it’ll get better again in the near future.

Oh, and “Spreadsheet” is the worst call-sign. Ever. 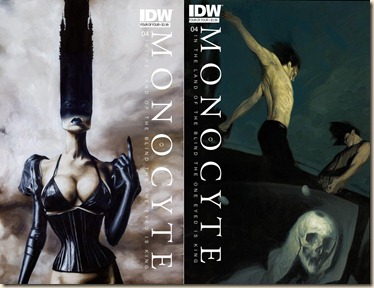 The world is in in chaos. Monocyte makes his way to Azrael as the human slaves are freed…

This is one of those series where it’s not entirely clear what’s going on, but because of the artwork you can’t help but keep coming back. It’s twisted, gothic, with hints of Geiger at his least-surreal, and plenty of moody atmospherics. 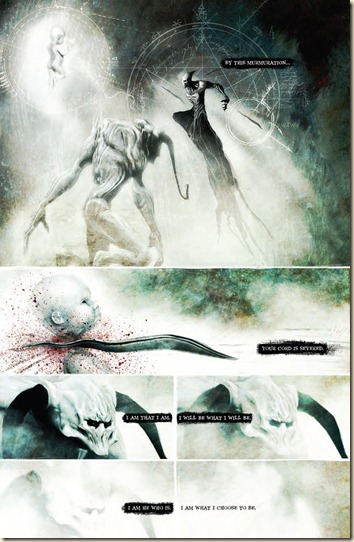 The dialogue and narration is a little strange – some of the language just doesn’t work. Nevertheless, we get some history and some interesting expansion of the story.

This series won’t be for everybody, but I think it’s a beautifully, brutally realised one. The artwork reminds me of Niklas Sundin’s album covers for Melodic Death Metal (and other) bands – including his own Dark Tranquility, In Flames and more. Really love the style, and it works really well in this comic. Some of the later pages are really eye-catching, but they also offer up spoilers, so I won’t share those.

So, a recommendation, but with caveats – this is, for me, far more about the artwork than the story (which remains pretty intriguing, if slightly strangely conveyed). 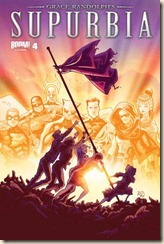 The shape-shifter has won — the Meta Legion lies in tatters after the robot invasion of Manhattan. When all hope appears lost, rookie housewife Eve White is pressed into action… but will it be enough? Don’t miss this thrilling conclusion, as SUPURBIA is rocked by a death in the family… Find out what goes down when the capes come off.

This is a pretty good end to the mini-series (it’s been picked up for an on-going series starting later in the summer, I believe), as we learn of what’s really been going on behind the curtain (or a couple of them, anyway), and also hints of what is to come in the future.

Really good artwork (slightly more on the cartoon-y side of things), but also bright and well-done. This is a great new series, and one that pokes some fun at super-hero comics in general, while taking an alternative look at the life of those whose lives are most intimately touched by the existence of super-heroes.

Certainly recommend people check this out.

Posted by Civilian Reader at 3:09 AM