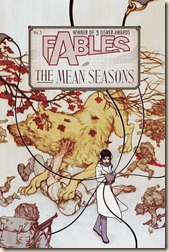 Bill Willingham’s hit series FABLES continues here, as issues #28-33 are collected for the first time in hardcover, along with the original graphic novel FABLES: 1001 NIGHTS OF SNOWFALL.

As Fables moves into its fourth deluxe hardcover collection, it just keeps going from strength-to-strength. While the book didn’t quite have as much impact on me as books one to three did, it nevertheless continues the story of these characters in very fine form, and maintains a quality way above that of many other comics – of the same genre and otherwise. This is easily one of my favourite comic series, and this book further confirms why it has been so successful and popular.

This volume has three main story-arcs within it – “War Stories”, “The Mean Seasons”, and “1001 Nights of Snowfall”. Each of these stories is pretty great, and innovative, offering up more detail and world-building of the Fables mythos. “in real life, living happily ever after puts stresses on the best of relationships”. 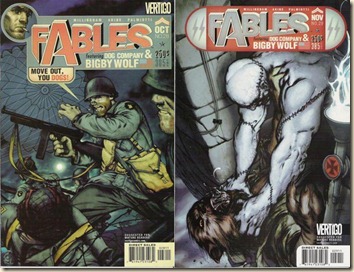 “War Stories”: this story focuses on a tale from Bigby’s World War II years. I really enjoyed this. It’s a great war story, going behind enemy lines, with a mission to destroy a Nazi installation where they’re conducting nefarious experiments! Classic story, but with a modern twist and I really loved that the team were able to incorporate the Nazis-&-the-Supernatural into the mix. Really fantastic.

“The Mean Seasons”: In this story, Snow White and Bigby’s babies (don’t say “litter”!) are born, and there’s something very strange about them. Because of their physical nature and appearance, they have to go to live on the Farm (the second community for non-human Fables, in upstate New York) – this is problematic, however, because Bigby is forbidden from ever going there thanks to his violent history and former appetites. He and Snow have a falling out, naturally. In the meantime, something or someone is killing Fables – first in Fabletown in New York city, then up at the farm. We learn more about Bigby’s family (his dad comes along), and there’s a really bittersweet, powerful ending.

In the meantime, Prince Charming is having to come to terms with his victory in the Mayoral election, and he and his new staff (Beauty and the Beast taking over from Snow White and Bigby) are finding that centuries of experience are what allowed the previous administration to run things seemingly so smoothly and easily. 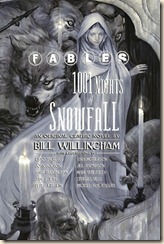 “1001 Nights of Snowfall”: This, I believe, was published as a graphic novel. It starts off in the form of an illuminated and illustrated prose story, featuring Snow White. Snow has gone to the Arabian Fable lands, to warn them of the likely invasion and conquest by the Adversary and to negotiate some form of treaty.

However, the Sultan has been cuckolded by his former wife, and therefore metes out terrible retribution on all womankind, daily. Snow is offered up as his next victim, but she convinces him to give her a reprieve for as long as she can tell him interesting stories. So, after the Sultan tells Snow his tale, she returns the favour. She tells him tales of her fellow Fables for 1,001 nights, in order to temper his wrath at women, and to postpone any continuance of his brutal policies. For each story, there is a slight or total change to the artwork and style.

There’s the story of her wedding, her wedding present (fencing lessons), and mysterious dwarf-slayings that put tension on the relations between the world above and the kingdom below. It is a story of impatience and hot heads and how they can lead to war. Corners are cut to stave off hostilities, but at what long-term cost? And what secret could Snow White be hiding? It’s nicely done, although I’m not sure what this means for the character Snow White, going forward. Or, possibly, if I missed something.

Each of the following stories deals with some established, key characters from the series. They’re not all about central characters, though, so we also get some nice stories about minor or peripheral characters, fleshing out our knowledge and understanding of them really nicely. For example, in the seven nights of Magic Christmas Pies story, we learn more about good ol’ Reynard Fox (last seen in “Animal Farm”, in Deluxe Volume 1). The third story gives us the tale of Frog Prince, and why he should always be kept working and not thinking too hard about heading back to the Homelands – this is such a sad tale, as we learn of what really happened to him and his family before and after the Adversary came. The fourth story, “The Runt”, tells readers the story of Bigby’s youth, his upbringing, and also his past crimes. It’s quite the story, and shows us just how far he has come since the Adversary laid waste to the European Fables’ lands.

There are a couple of micro-stories, one that features the rabbit warriors who took on the Adversary (“A Mother’s Love – which also features a seriously pissed off, evil bunny with laser eyes...), and another that gives us a very quick re-interpretation of the Little Mermaid story.

“Diaspora” fills in some of the stories for key characters from the main storyline – and there’s more on how Rose and Snow escaped the Adversary, how the Witch “killed” by Hansel and Gretel joined them, and how and where she gets her power (a very dark story). “Fair Division” tells us the story of King Cole, how his nobility guaranteed him his place as mayor of Fabletown (until Prince Charming challenged him, of course – see Deluxe Volume 3). I thought this was a really good closing story.

Overall, then, this is another fantastic collection, and comes very highly recommended. With the plethora of art styles used throughout the book, it has a slightly less-cohesive feel to it, but it nevertheless engages the reader fully and provides a multitude of alternative interpretations on the Fables and Willingham’s versions of them.

Anyone with an interest in fables, fairy tales, story-telling, and comics has to read this series. It’s innovative, extremely well written and rendered, and utterly addictive.

Posted by Civilian Reader at 6:14 AM