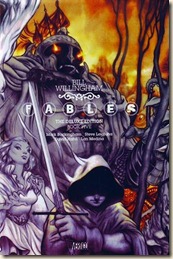 In these tales from FABLES #34-45, Boy Blue undertakes a mission of revenge as he uncovers the Adversary’s true identity! Plus, Jack’s adventures in Hollywood and Mowgli's return to Fabletown!

This is another very strong addition to the series, and I really enjoyed “Homelands” and “Arabian Nights & Days”. “Jack Be Nimble” was also very good, but as the seed of a new spin-off series, and despite featuring one of my favourite characters, it didn’t have quite as much punch. Of course, “not as much punch” when talking about Bill Willingham is still very high quality, so this is nevertheless probably one of my favourite collections. 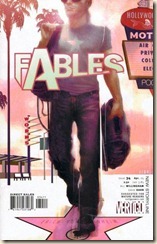 In this story, Jack leaves Fabletown with a truckload of loot that he has “liberated” from the vaults. He’s gone to Hollywood and set up a studio, with the dream of filming a trilogy based on his life and adventures. He plays everything from behind-the-scenes, which helps boost buzz about him and the movies, while obeying the Fable laws of never revealing their natures to the Mundies. It’s a really good story, and it was nice to see Jack operating outside of the Fabletown fold, and dealing with the shark-like operators of Hollywood. Beast comes to shut him down (we’re told he’s been sheriff for five years at this point, so the timeline’s been bumped up quite a bit – which does makes sense, as Jack puts three massive movies into production and release over the course of the story). It’s a good story, and certainly made me want to read more of the spin-off series (expect reviews to start cropping up soon). 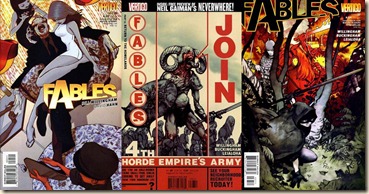 This large story takes the clock back so we know what’s been going on while Jack was in Hollywood. It follows Boy Blue’s trip back to the Homelands, and his quest to save Red Riding Hood – who he fell in love with before the evacuation.

In the first chapter, “Death & Taxes”, we get a goblin-perspective, and follow some tax-collectors going about their usurious business, until the “Black Knight” (actually Boy Blue) catches up with them. The last time we saw Blue, he had escaped back to the Homelands, taking with him some very powerful artifacts. The first couple of chapters are gripping, as Blue’s quest advances very quickly and builds to a tense first-act finale.

Before Boy Blue’s story is complete, however, we’re sent back to Fabletown and the Farm for an interlude that sees Mowgli return. He’s a character that has been conspicuously absent from Fables, so I’m glad they brought him into the story. Also, there is a spy for the Adversary operating in Fabletown! And Fable leadership decide that it’s time they started thinking about possible retaliation against the Adversary.

The story then returns to Boy Blue’s quest. We finally learn of the Adversary’s true nature and identity (though there have been hints and theories voiced at earlier moments in the series). The story of how he came to be the Adversary is a compelling tale, and also a rather good commentary on mission-creep and the insidious nature of incremental power. This really is an inspired story, and I loved how it’s written. I won’t spoil anything, though, as it’s a pretty big reveal. Really excellent. Blue’s mission comes to an end, with moderate, but not ultimate success. It’s a very good story-arc, and certainly one of the best and most-gripping.

At this point in the Fables story, the Adversary has conquered most of the European Fable worlds, and is turning his eyes on the Arabian (and also African and Asian) lands. The story opens with a delegation of Arabian Fables arriving at Fabletown, made up of Sinbad and his large entourage. Only one of them speaks (very, very broken) English, which naturally leads to confusion all around and chuckles for the reader. Sometimes the jokes are a little obvious, but Willingham and the artistic team manage to make them work and not feel tired.

There’s a schism in Sinbad’s entourage, as Prince Charming’s and King Cole’s meetings start to mellow the visiting ambassador (for example, agreeing to free all his slaves). Sinbad’s wazir decides to take things into his own hands, which kicks off a nefarious plan that could lead to the destruction of Earth! (Despite the rather melodramatic potential, it’s pretty cool.) We follow the Fable leaders as they attempt to deal with fall-out of the wazir’s devious plan; and also get more story featuring Frau Totenkind (a superb character, actually) and her even more devious solution. A compact is signed, and we see closer ties between the American and Arabian Fables. It’ll be interesting to see if more Fables story-arcs are set in the Arabian, Asian and African Fable-lands.

While Charming and Cole are dealing with the visiting delegation, the former must also continue to work through the wealth of intelligence Boy Blue was able to bring back with him from the Homelands (that witching cloak is really very useful...).

Overall, this is a superb addition to any Fables collection, and if you’ve been following the series then this is an absolutely essential purchase. If you haven’t tried the series yet, then I strongly recommend you try it: it is a perfect example of what can be done with comics, how broad and engaging they can be.

Five big books in, and the series is still going so strong! The next Deluxe edition is released at the end of the year. I may succumb and get Jack of Fables and the two Cinderella spin-offs (which are surprisingly cheap on Amazon UK)...