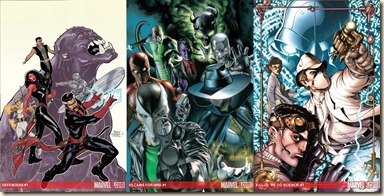 A small clutch of fun, recent comics from Marvel and Dark Horse Comics

Because the other review posts were getting rather crowded, I decided to group the Marvel reviews together, and added the lone Dark Horse review as well. All of them were bought on a whim – The Defenders just because it was a #1 and I wanted to see if it was better than the new line of X-Men titles (which seems to be growing still!); Villains for Hire because it’s written by Dan Abnett and Andy Lanning (who are also handling DC’s Resurrection Man – one of my favourites in the New 52); and X-Club because it’s written by Simon Spurrier, who I’m familiar with because of his work for Black Library. So, not particularly intellectual reasons, but never mind. The Occultist I tried because it sounded interesting and has an awesome wrap-around cover: 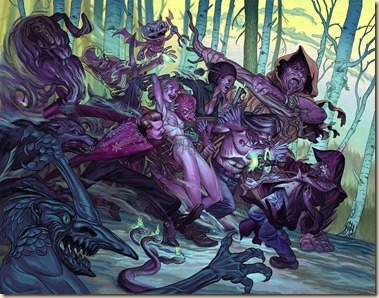 [Question to ponder: Is it ok to judge a comic by its cover? Especially with all the damned variants some titles get?] 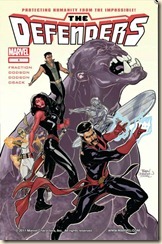 Spinning out of the stunning end of FEAR ITSELF! The final Worthy on a global rampage! Everyone’s favorite Marvel characters banding together to solve a mysterious conspiracy deep at the heart of the Marvel Universe! The last line of defence against the forces of the unknown!

Doctor Strange, whiling away his time (dallying with a grad student studying some mundane aspect of the occult), is approached by The Hulk for help. The big green dude’s made a huge mistake that could result in “catastrophe” for the world. So, Strange sets out to collect a team to help him stave of the impending catastrophe. King Namor (who seems to be Marvel’s answer to Aquaman), the Silver Surfer, She-Hulk and Iron Fist all join the team, each bringing their unique talents and perspective to the hunt.

It feels like there’s a lot of story in this one issue, which made a really nice change. It’s well written, with good dialogue, narration and some decent quips sprinkled here and there. Vividly drawn and coloured, this issue has some great art – it’s clear, but not too polished, which gives it a more natural feel compared to some of the more stylised Marvel art I’m used to seeing.

This is a good title. I’m looking forward to seeing where it goes next. While harnessing his new powers as the Occultist, college student Rob Bailey must defend himself and those around him from a series of hired Hit mages with unique magical abilities and a serpentine demon known as the Swordbreaker, all determined to kill him and to possess the powerful spell book known as the Sword!

Despite this very clearly stating on the cover that it is “1 of 3”, it is in fact not the first issue. There was a one-shot comic published in 2010 that introduced Rob Bailey and told us how he acquires “the sword” – a magical spell book that appears to have been absorbed into him. It gives him some great magical powers, which he at first fights against, before embracing them towards the second half of the issue – that is, embracing them beyond using the power for personal gain and gimmicky applications.

Seeley does a good job of giving us enough information to not be totally lost, but I think I’d like to get a hold of the 2010 one-shot to really understand what’s going on. It’ll be interesting to see how much of a story we get in the next two issues. The art is good, not too polished, which I thought suited the content rather well. An interesting read, but one that it might be best to wait for all three (well, four if you include the one-shot) parts to be available?

This issue was, nonetheless, still pretty fun to read. If you’re looking for a comic that fits into the Urban Fantasy genre, then The Occultist should appeal. [Issue 2 is published December 14th.] 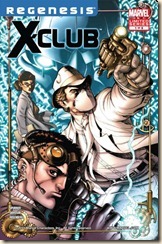 “WE DO SCIENCE!” In the wake of SCHISM, the X-Men’s Science Team takes it upon themselves to make a gesture of goodwill on behalf of mutantkind and better the world... using SCIENCE! But just as construction of the X-Club’s state of the art space elevator nears completion, chaos erupts! And it appears to the world that mutants are to blame. Can Dr. Nemesis, Madison Jeffries, Kavita Rao and Danger clear the X-Men’s name before their experiment backfires? Don’t miss this new limited series that will surely change how you look at the X-Men and the Periodic Table of Elements FOREVER!

Before I start the review, can I just say that I love how melodramatic that synopsis is…

The issue starts with Captain America and his team sinking a Nazi warship back in 1945. It’s not clear how this is relevant to what follows, but the X-Men have organised and directed the construction of a space-elevator at the same site in the ‘present’. Needless to say, there’s something not right here, with a mysterious being seemingly pulling some strings behind the scenes, and things quickly get a little borked at the unveiling.

There’s a great sense of humour and fun running throughout this issue. Predominantly, this comes across in dialogue, observations and plentiful amusing quips. (For example, Magneto is described as “Probably not evil”, while Cyclops is “Less pompous than he acts.”) The scientists are wonderfully inept at dealing with non-scientists (so, just about everybody else they have to deal with). They are the geeks who equip the superheroes. The Q to the X-Men’s James Bond. Their social ineptness was fun to read and see, but never too ridiculous.

It sounds a little twee, but this title is delightful. I’m almost sad that it’ll only last five issues. Only almost, however, because that should promise a great, short story with a lighter tone: this should mean that it shouldn’t have time to become ridiculously silly, or outstay its welcome – which Wolverine & the X-Men has already done, a little bit*. The alternative perspective on X-Men operations is a nice and novel touch, also. Reading this put me in an excellent mood. 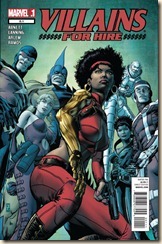 Villain on villain action! Why has Misty Knight hired psychopaths like Tiger Shark and Speed Demon? Because the PurpleMan is out to build a criminal empire with an army including Avalanche, Shocker and the all-new Scourge! Let the baddest man (or woman) win!

The 0.1 issue is really just a scene-setter for the Heroes For Hire premise. It does a good job of informing the reader how it all works, before showing us how the series will morph into “Villians For Hire”. It’s an interesting idea, well-executed, and it’s nicely drawn and coloured. For me, this was a useful read, as I wasn’t familiar with the Heroes for Hire format at all, but I’m not sure that it’s really necessary to read it before diving into the first issue proper. (Although, it’s written by Abnett and Lanning, so of course I was going to check it out.)

The second issue offers a nice juxtaposition with the first. The villains’ operation is nowhere near as slick, and the team of hired criminals come up against something surprising: a rival team of hired criminals looking for the same thing! A fun, action-packed issue, it kicks of the series with quite a few bangs (and a surprising final page). Good writing, nice pacing to the plot, good dialogue, and pretty good artwork – really does what you want a first issue to do. It’s all taking place at night or in gloomy locations, so the art has a pretty dark palette, but it works and complements the story perfectly.

With only three more issues in the series, this should prove to be a fun, short diversion.

Posted by Civilian Reader at 2:45 AM