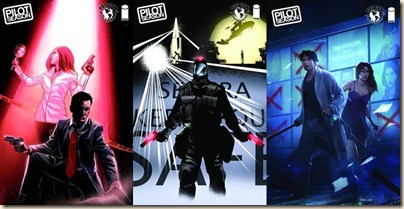 Every year, Top Cow releases one-shot issues from a selection of new titles (this year, there are eight). After all of them are out and have had a little time to make the rounds among comic-readers, the company holds a vote. The winner becomes an ongoing series. I’m not sure if all of the others are just killed off there and then, or if they are put on the back-burner, but this is a pretty interesting way to decide on which titles to produce. Although, as I’ve found, it’s a potentially very frustrating initiative, if you like more than one of them… Anyway, I decided to try out three more of them this week.

Reviewed herein: The Beauty, City of Refuge and The Test 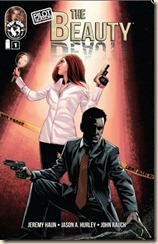 Modern society is obsessed with outward beauty. What if there was a way to guarantee you could become more and more beautiful every day? What if it was contagious? In the world of The Beauty, physical perfection is attainable and while the mass majority of the population has taken advantage of it, Detectives Foster and Vaughn will soon discover it comes with a terrible price.

This is a tale of just how far people are willing to go in order to become ‘beautiful’, even if they don’t know the potential side-effects. In this world, beauty can be caused by an STD. Anti-Beauty groups are cropping up, causing trouble and more for those who have contracted the disease. After the bizarre, violent death of a Beauty carrier on a public train, however, things start to get more interesting and worrying. Two detectives – one an unwilling carrier of the disease and one ‘healthy’ – are put on the case to discover what happened to the victim.

This title is great – I really liked the story and art, and I think the premise is pretty novel and intriguing. The story has the potential for nuanced social commentary (it already contains some) and is very promising. Yet another great title. The final page is a real cliffhanger, so it’ll be really disappointing if it doesn’t get picked up. I’d love to know where this goes next. 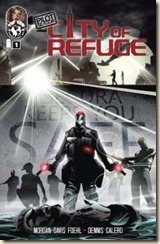 Over a decade after Terminal, the residents of San Francisco live a peaceful and prosperous existence thanks to the Program. Every resident of the city is hand-selected and implanted with the chip Secura, which removes the human capacity for violence to maintain the greater good. Only the city's security forces are allowed a brief reprieve from Secura through use of the drug Freestone in order to do their jobs. Now, rumors of Freestone getting out into the open market threaten to upset the delicate balance keeping humanity from extinction.

This story has an interesting premise. This is a nice, slow-burn story with a shocking final page. I’d like to see how the story unfolds, how the Dose is making it onto the streets and whether or not anything else is going on behind the scenes. The art is fine, very moody and atmospheric, and adds a strangely sinister air to a supposed city of “refuge” – a city where the citizens are stripped of their less stable emotions, as it turns out, breeds an awful lot of resentment.

Reminds me a little of some future-noir thrillers, but with a sci-fi edge to it. There are also shades of the movie Equilibrium (Christian Bale). Not bad. I’m not totally sold on this, like I was for Seraph and The Beauty, but it’s pretty good nonetheless. If it was picked up, I imagine I would keep reading it. 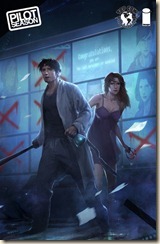 A group of strangers wake up in an enclosed environment with no memory of who they are and how they got there. They are the lone survivors of an apocalyptic event, chosen to repopulate the Earth. But what is the true nature of their fate?

Lost meets Truman Show, but set in a (possibly) dystopian future where only a select handful of human have survived? That’s a pretty cool premise.

There are lots of intriguing nuggets dropped for us in this first issue, as the strangers start to get their memories back. Some promising themes, but nothing yet to make it truly stand out.

I think this title could end up going one of two ways: it will either end up being a title worth following, taken in unusual and unexpected directions; or it could end up being slightly par-for-the-course and a standard dystopian survivor tale. But, it being a Fialkov production, I find it difficult to believe it would end up being dull. The Test is not the strongest out of the four Pilot Season titles I’ve read, but it is certainly interesting in its own way.

I reviewed another title in Top Cow’s Pilot Season last week, Seraph, which I really enjoyed. Check out the review here.

Posted by Civilian Reader at 12:53 AM