A bumper-crop of Marvel titles

So, this week there were no new issues in DC’s New 52, but there were a number of new Marvel issues that I’ve been considering. Long-time readers will know that I’ve not been too impressed by some of the Marvel collections I’ve reviewed this year, and was also recently disappointed by the new Wolverine & The X-Men series that began a couple months ago. With the extra time, I’ve decided to focus on non-DC titles this week, and because there were a number of X-Men-related issues, I’ve grouped them into a single review (with another, more general post to come this weekend). 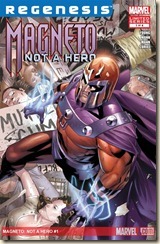 The X-Men are shaken when Magneto finally goes villain again. The Master of Magnetism is caught on video murdering members of an anti-mutant group. Why did he throw away everything he’s earned with the X-Men?

Hm. I’m not really sure what to make of this title. It’s unclear where exactly it falls in the Regenesis timeline, and the final page confused me quite a bit (although, with some hindsight, now, I think I kind of ‘get’ it).

Magneto has been accused of murdering a group of anti-mutant agitators and there’s video proof of the event. Nevertheless, there’s also proof that he was nowhere near the attack. With Emma Frost’s help, he locates the source of the confusion (while adding a little to my own). This could be an interesting mini-series, but given how little really happens in this first issue, I hope they really cram in quite a bit into the next three issues.

The art is, like many Marvel titles, inconsistent – it’s sharp, clean and clear in one panel, yet can then be vague and undefined in the next. Very strange.

I’m not entirely sure it was worth the $4, if I’m honest. Maybe if it had been collected into a longer book? (Not unlike Superman Secret Identity.) 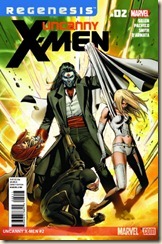 What is to become of the mutants who side with Cyclops after the big split? And what does it have to do with the resurrected Mister Sinister?

The synopsis poses two questions. The answer to the first has already been established in the previous issue: they are going to form the “Execution Squad”, which will address both threats to mutantkind and also mankind. This starts off with Sinister’s assault on and theft of the head of the Sleeping Celestial. The answer to the second question…? Well, I’m not really sure what Sinister’s role is other than to cause problems and execute a diabolical, long-in-the-making plan of his own.

Sinister has become the Marvel Universe’s answer to The Matrix’s Agent Smith – there are endless numbers of him, and he’s in control. Great. This issue basically just hammers home the fact that whatever Cyclops’s team does, there will always be more clones of Sinister.

This isn’t a bad issue, but nor is it a particularly great one. It’s very talky, which might put off some people who’d prefer a little more action. As someone who is not afraid of lots of words, I didn’t mind the dialogue so much, except that it didn’t really seem to go anywhere, and there were more typos than I would have liked or expected from Marvel (it’s not like there are tons of words on each page, or in an entire issue – surely someone who actually take the time to read it properly?).

The art’s nice, as expected, and the dialogue and general writing is fine. I’m just not really sure where this story is meant to be going. It just seems a little thin, as blockbuster opening story arcs go, and I don’t think it’s strong enough to hold my attention. So that’s another Marvel title knocked off the list. 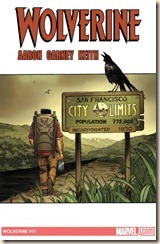 #17 – It’s a new day for Wolverine, but first he has one last bit of old business to deal with... in Chinatown. That is, unless Gorilla Man gets there first.

#18 – Journey to the stronghold of the world's newest, most powerful drug dealer at the center of the earth, where Logan and Gorilla Man find a fierce new ally. Enter: Immortal Weapon Fat Cobra!

#19 – Logan struggles to wrap up unfinished business in San Francisco. Journey to the stronghold of the world's newest, most powerful drug dealer... at the center of the earth, where Logan and Gorilla Man find a fierce new ally.

I must admit that one of the main reasons I picked this up was because I needed something to save Wolverine from the burn-pile. Wolverine & The X-Men, the new series that follows the X-Men who sided with Wolverine after the vents of Schism, started off fun, but continued disappointingly. So, after seeing a sneak-peak preview of issue 19, I decided to pick up this triplet of issues (they form a single, short story-arc with a proper ending).

Wolverine’s wrapping things up in San Francisco before heading out back to Westchester to re-build and re-open the school for mutants (which is what he’s doing in Wolverine & The X-Men). First, however, he has to patch things up with Master Po, and fix the problems caused by his absence from being Black Dragon. (Long story short, in this title, Wolverine cleaned up San Francisco’s street crime by… well, taking over the street crime.)

It is, on the whole, a good title. The dialogue is fine, sometimes amusing (thanks to well-placed quips here and there), but manages to never descend into silliness. That being said, there are dragons and a talking Gorilla Man.

There’s plenty of action (which is very well drawn and composed on the page), with a decent amount of story. There was, however, an overly-sudden ending – I feel that much more could have been made of it, and the rather swift wrapping up robbed readers of what could have been a longer, more substantial story. I liked the idea of the villain’s empire underground, but it wasn’t utilised to its fullest.

Despite this being a prelude to Wolverine & The X-Men, there appears to be more to come under just the Wolverine title. Although, there also appears to be another series going by the same name... It’s all rather confusing, and just reminds me of why I’ve had so much difficulty getting back into Marvel’s X-Men titles. 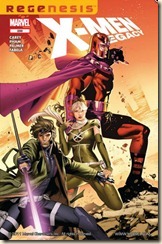 The X-Men are divided. As the teams part ways, Rogue, Magneto and Gambit attend to unfinished business, hoping to avoid answering the question: Whose side are they on?

This is another title with an unclear place in the Regenesis continuity timeline, but if I had to guess, I’d say it was probably just before the two splinter titles begin, and unconnected to the Magneto title reviewed above.

The story involves the seven mutants who came back from a mission that took place in previous issues (they were either in space or in another dimension, it’s not clear to me). It was kind of interesting, but without the background and experience with the title, it was a bit difficult to know what to make of it all. Interstellar and inter-dimensional storylines have never much appealed to me, but it seems that X-Men titles have really gone in for them of late – at least, in terms of their big ‘events’.

The art in this issue is strange, and does the same as that in Magneto (and Wolverine), alternating between sharp and clear portraits, and runs through to more vague and undefined wide shots. Sometimes, this works fine, while other times it makes characters look a little deformed (and I’ve never seen the female form so distorted as one the frames featuring Emma Frost). I’m not sure what I think about this. More consistent would have been nice, but it’s apparently something an awful lot of comic artists go in for.

The issue did have a pretty striking final page, though. I’d be interested to know what happens next, but I’m not going to rush out to buy the next issue.

Hm. Overall, I would say I’m not as impressed by these titles as much as I have been with DC’s New 52. The writing isn’t as tight, the art not as consistent, and the stories are just not as meaty. Maybe if I’d been following them for longer, they would have been more rewarding. That being said, I’m already pretty familiar with most of these characters, so I’m not sure how much of a difference it could have made. I’ll be interested to read more of the X-Men and their related series, but I think it’s a case of collections being the best option when it comes to Marvel titles. They just don’t come close to being as well-written and satisfying as most of the DC titles I’ve read. (Although they do make pretty good movies.)

Posted by Civilian Reader at 12:03 AM