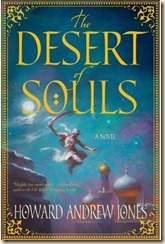 In 8th century Baghdad, a stranger pleads with the vizier to safeguard the bejeweled tablet he carries, but he is murdered before he can explain. Charged with solving the puzzle, the scholar Dabir soon realizes that the tablet may unlock secrets hidden within the lost city of Ubar, the Atlantis of the sands. When the tablet is stolen from his care, Dabir and Captain Asim are sent after it, and into a life and death chase through the ancient Middle East.

Stopping the thieves — a cunning Greek spy and a fire wizard of the Magi — requires a desperate journey into the desert, but first Dabir and Asim must find the lost ruins of Ubar and contend with a mythic, sorcerous being that has traded wisdom for the souls of men since the dawn of time.  But against all these hazards there is one more that may be too great even for Dabir to overcome...

It took me a long time to get around to reading this novel, but I’m very glad that I’ve finally managed to do so. It’s not flawless, but this is a fun sword-and-sorcery adventure in the sands.

First off, before I go into the review proper, The Desert of Souls had me chuckling at the first paragraph. It was a great way to get the reader introduced to some of the main characters as well as let us know what sort of novel we should be expecting, and the author’s sense of humour. Now, before anyone gets the wrong idea – this is not a comedy. It does, however, offer up some lighter moments.

Overall, The Desert of Souls is a fun tale. It was a bit slow to get going, as Jones makes sure we know who all the players are and what their relationships are (even though Asim and Dabir have featured in a number of short stories, many readers – including myself – will be completely new to them, so this was a necessity). Once the pieces start to fall into place, the pace picks up and we get moving. Things start rolling after Asim, Dabir and Jaffar stumble across a man who has been beaten, apparently after stealing a mysterious door pull. As our two heroes investigate, they discover it’s one of a pair that used to be in a doomed and destroyed city, home of the Keeper of Secrets: and djinn that bartered knowledge for souls. Jaffar sends Asim and Dabir off to find out more, and to foil the sinister machinations of a rogue magi. Their prey leads them on a merry chase outside Baghdad and into the deserts of Iraq, and they visit Magian temples, battle river pirates, face betrayals and terrible trials. It is an inventive and original novel, retaining a classic feel of Arabian Nights-style stories.

Jones’s prose style is interesting and distinctive from most other novelists I’m familiar with – it is as if the story were being recounted to the reader by Asim. The prose is good, brisk for the most part (especially during dialogue), but at times a little slower. For example, some passages of description were a bit longer than I thought necessary; nothing major, but they did affect the general flow and momentum of the story. This is my only main issue with it. I wonder if it is a result of Jones’s long-time acquaintance and clear aptitude with writing shorter fiction? It is by no means bad, and certainly the more measured pace doesn’t ruin the story, but there are times when I thought things could have been streamlined or sped-up a bit more. My only other niggle was that the style left me feeling no more than a bystander or listener to these events, and therefore didn’t allow me to develop a strong bond with the characters beyond Asim, Dabir and, to a lesser extent, Jaffar (all three of them are just great characters). Sometimes, even with the two main protagonists, I wasn’t able to engage with their emotions as much as expected – for example, when someone particularly close to Asim dies, I didn’t really get proper feel for his grief.

Nevertheless, the characters are good. Asim, the strong warrior; Dabir, the careful sage; Jaffar, Asim and Dabir’s master, naïve of the real world but comfortable wielding power. An event early in the novel dictates some of the character interaction, as suspicions are planted regarding agendas and Dabir’s intentions towards Jaffar’s niece. The actions scenes are both plentiful and excellently written. Not only that, they’re varied – it sounds like a weird thing to pick up on, but sometimes actions scenes can start to seem rather dull and repetitive. Thankfully, Jones manages to use the different environments and situations well, which makes the action scenes all the more interesting.

I liked the level of ‘fantasy’ elements at play in the novel. It’s set in medieval Iraq, and draws on mysticism and the occult, playing around with myths and legends, rather than secondary world fantasy. Jones has done a wonderful job of realizing and adding detail to this era and the places he sends his characters to, which only adds to the quality of the reading experience and the story itself. The Middle Eastern (or Middle Eastern-style) setting is becoming more popular in fantasy circles, which is a great development, offering some more variety to an otherwise Medieval-Euro-centric genre.

Despite the pacing issues, I thought this was a good read. I’d recommend it to anyone who wants a short fantasy novel that revives the aesthetic and atmosphere of Arabian Nights.