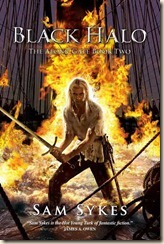 The Tome of the Undergates has been recovered, and the gates of hell remain closed. Lenk and his five companions set sail to bring the accursed relic away from the demonic reach of Ulbecetonth, the Kraken Queen. But after weeks at sea, tensions amidst the adventurers are rising. Their troubles are only beginning when their ship crashes upon an island made of the bones left behind from a war long dead.

And it appears that bloodthirsty alien warrior women, fanatical beasts from the deep, and heretic-hunting wizards are the least of their concerns. Haunted by their pasts, plagued by their gods, tormented by their own people, and gripped by madness personal and peculiar, their greatest foes may yet be themselves.

The reach of Ulbecetonth is longer than hell can hold.

In Sykes’s second novel, we get more of all the good stuff that made Tome of the Undergates such a compelling and addictive read – specifically, his engaging and unique characters. While it does suffer from one flaw that bothered me in Tome as well, this is a very good novel. If you like your fantasy dark and twisted, Black Halo proves yet again that The Aeons’ Gate is a series tailor-made for you.

As the synopsis states, Black Halo is about our band of adventurers shipwrecked on an island steeped in bloodshed and battle. We are reintroduced to the characters as they are going nuts, stuck bickering on a boat in the middle of the ocean, hoping to go unnoticed by the myriad sea monsters that inhabit the region (this hope is, naturally, dashed). This helps get us back in the mood and reacquainted with the characters and their predicament. Of course, this being a Sam Sykes novel, we know that Lenk is absolutely right when he comments, “It only gets worse from here.” The adventurers are separated upon arriving on the island, and precede to go through personal journeys of understanding, madness, and self-discovery. With tongue firmly placed in cheek, of course.

Considering our protagonists are running around a forest, separated and largely at leave of their sanity, the novel takes a little while to find its stride, but rest assured that it does. Lenk is particularly weird in Black Halo – his delusions and hallucinations are ever-stranger (the philosophical monkey was good, though), and with the voices in his head his only constant ‘company’, he spirals rather quickly. Kataria wars within herself over the meaning of being a shict, and what her loyalty to Lenk means for this. Asper, Dreadaleon and Denaos are at least together, but bickering and struggling with their own internal problems and suspicions. Then they meet the tribe of very hospitable, pant-stealing Bermudan-esque lizards.

We see normality (or what passes for it coming from Mr Sykes’s imagination) in the chapters about Bralston’s mission to find the adventurers. Bralston is a new character, a member of the Venarium (or wizards’ college), tasked with enforcing the Laws of magic. The netherlings flagrantly break these laws, using totems that take away the personal and physical cost of using magic in this world. Bralston doesn’t feature as much as I would have liked – he offered the chance to get away from the fevered jungle, to flesh out the world a little more. Perhaps in the next novel.

In some ways, the myriad issues Sykes’s characters exhibit personify every human insecurity you are likely to come across. They are arrogant, selfish, insecure, afraid, sociopathic, and also needy. They are all broken souls, and it’s impossible not to feel for them, in one way or another: Dreadaeleon’s youthful infatuation with Asper and the resentment he feels towards Lenk and Denaos for being able to talk to her (or any woman) without fumbling and tripping over himself; Kataria’s sense of racial confusion; Lenk’s encroaching madness and selective amnesia; Denaos’s struggles with his connection with the group, but also fear of repeating the past (not to mention of it catching up with him).

Despite all this, there is an underlying loyalty and comradeship that has developed between them, a sense of (fragile) family that can arise from shared struggle and experiences. For example, when the group are reunited and start making plans to continue with their quest, but Gariath is missing, the group make a point of stating they are incomplete, and that something must be done about finding him:

“I suppose we can delay our plans until we find him.”

Throughout the novel, I found myself chuckling and inelegantly snorting at many of Sykes’s jokes and the banter between his characters – he has a real gift and flair for wicked quips, sarcasm and amusing asides and observations – particularly those on the human condition coming from Gariath. The interactions between the adventurers, as well as other characters, is so natural that I wish there had been more dialogue (not counting the hallucinated conversations, which didn’t quite have the same spark – save the philosophical monkey).

“I argued with a monkey.”

The rogue blinked. “Did you win?”

Some might be put off by what looks, on the surface, like relentless negativity; but the novel is just as much about the bond that has formed between this disparate group of adventurers. After a year of traveling together, and despite knowing each of them harbours dark secrets of their own, they have formed a bond that exerts a surprising pull on their decisions. By nature, Kataria and Gariath should want to kill their human companions, but they are both drawn to Lenk – Gariath finds a purpose, a way to numb the pain of being so removed from his dwindling race; while Kataria is drawn personally and physically to Lenk (a fact that makes her hate herself a bit). While these two question why they are hanging around with the humans, the humans themselves are also struggling with their own issues: Lenk can’t remember his past, and has conflicting voices in his head speaking to him; Asper is still struggling with what’s inside her, the fear that her secret will get out, not to mention a diminishing religious belief; and Denaos is hiding from his past, finding comfort in picking on Dreadaleon, who is likewise losing control of his body ever-quicker because of his magic use.

Asper’s religious vocation offers up some interesting philosophical discussion (such as it is) between the band of adventurers, who are either atheist or subscribe to rather indifferent religions. Dread, who is part of the fiercely atheist Venarium, has difficulty respecting Asper’s beliefs with his raging crush on her. The emotions Sykes gives his characters are very real, and frequently raw, ever-bubbling under the surface, waiting to surface in the face of any conflict. The bickering between the group is, basically, a hyper-developed safety and deflection mechanism, used to hide both their pasts and also their growing dependence and, for want of a better word, affection for each other.

Sykes is, I think, still finding his voice in Black Halo, and the novel shows great growth from Tome (which was itself a very good novel). The novel’s weakness is that the author appears easily distracted by his creation(s) – no bad thing, really, but it does mean we get some passages that feel over-long, or perhaps self-indulgent. That these passages can be amusing does mean we’re less inclined to be irked, but they certainly slowed the momentum of the story (for me, this was a large portion of the jungle-fever chapters, when our ‘heroes’ are suffering internal turmoil and hallucinating plentifully, without moving the story along as much as was perhaps necessary). The slow start was therefore a bit disappointing, but once the story kicked in, things picked up considerably and ‘normalised’ a bit more, and the payoff (final 100 pages) was great and totally worth the trip. If you loved Sykes’s debut novel, then Black Halo will certainly delight, as it is a better novel and improves on the first one capably.

Twisted, dark, original, and engaging, Black Halo is a promising second novel from this still-young author. (I am only mildly annoyed that Mr. Sykes is younger than me…)

I look forward to the next novel in the series. Recommended.

Also on CR: An Interview With Sam Sykes

Posted by Civilian Reader at 1:05 PM