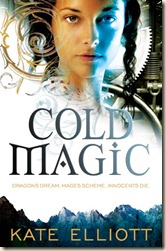 As they approach adulthood, Cat Barahal and her cousin Bee think they understand the society they live in and their place within it. At a select academy they study new airship technologies and the dawning Industrial Revolution, but magical forces still rule. And the cousins are about to discover the full ruthlessness of this rule.

Drawn into a labyrinth of politics involving blood and old feuds, Cat is betrayed by her family and forced to marry a powerful Cold Mage. As she is carried away to live a new life, fresh dangers threaten her every move and secrets form a language she cannot read. At least, not yet.

But both cousins carry their own hidden gifts and these will shape great changes to come. For in the depths of this treacherous world, the Wild Hunt stirs in darkness and dragons are waking from their sleep.

In Cold Magic, Elliott has created a fascinating and complex alternate nineteenth-century Europe. In this world, people are as likely to have migrated due to plagues of ghouls as political upheaval, and the government is a kind of dual feudal system of Mage Houses and princes. There are threads of magic running throughout the world, but the powerful Houses are made up of ‘Cold Mages’, who wield cold like a weapon. The imaginative world and intriguing magical element of this novel make for an enjoyable and engaging read.

As the novel begins, Europa is beginning to see the technological and social upheavals of our nineteenth century, as internal combustion becomes evermore widely-used and the common people begin to question the inherited rule of their overlords. This conflict is heightened because of the innate opposition between the heat-based technology of internal combustion and the cold magic of the House mages. Elliott weaves these elements together in minute and evocative detail – this world is brilliantly-imagined.

We see this world through the eyes of Catherine Barahal, a young woman in a well-respected but impoverished family. The events of the novel are set in motion by what is for Cat a painful personal betrayal, but what becomes quickly apparent is that her life is caught up in a much greater series of conflicts, involving the emerging social and technological revolutions, the political turmoil promised by the return of the Napoleon-like General Camjiata, and the relationship between humanity and the Night and Day Courts of the spirit world.

Cat is a very appealing character: intelligent, resourceful, and loyal to a fault. What becomes apparent as her journey progresses is that nothing and no one, not even herself, is what she thought it was; for Cat, the only constant is her love for and trust in her cousin Bee. Their friendship is the core relationship of this novel: while the two women are separated for the majority of the novel, Cat’s concern for Bee is constantly informing her actions. I would have liked to see more of Bee – both she and Cat grow up a lot over the course of the novel, but her growth occurs mainly outside of the narrative. As an aside, I found it very refreshing to read a novel in which the driving relationship was one between two women – female friendship is all-too-frequently overlooked or understated.

Andevai – the Cold Mage Cat is forced to marry – is also an interesting character. It is clear early on that, however justified her resentment might be, Cat’s preconceptions about him are not entirely accurate, and the relationship that emerges between them is in some ways a typical love/hate dynamic, in which their propensity to enrage one another will obviously blossom into passion. However, I very much appreciate that, while Cat may be blind to her emotions towards Andevai, she is quite frank about her physical attraction to him – she is somewhat lacking in self-awareness, but she is not naïve.

The social and racial divisions of this society seem to date back to ancient cultures (the Barahal family is of Kena’ani, or Phoenician, lineage), and the conflicts and abuses of a thousand years ago are as relevant as those only decades old. As I read, I found myself wishing I knew more about our own ancient history so I could see where and how Elliot’s version differed. Throughout the novel, the characters make specific reference to events in their history, and I was frequently unsure where to place them. Elliott does eventually include an outline of the broad political history of the world, but I would have appreciated it earlier on.

Elliott’s writing is very engaging: each sentence and paragraph is brimming with detail. I occasionally found the dialogue a little stilted or over-formal, but Elliott does a great job of creating an idiom for her characters founded in their own society. The depth of the world Elliott has created is so impressive: each location has a distinct atmosphere, and details are consistent and coherent throughout. Through Cat’s journey, Elliott is able to give a broad picture of her world, introducing her reader to roadside taverns, city slums, academic institutions, factories, country villages, Mage Houses, and even the spirit realm. Cat’s context and course of action are constantly changing. While this does enable the reader to get to know the world, I found that this gave the plot a somewhat episodic feel, and kept it from building the momentum it could have.

While I enjoyed the novel, it was very much an introduction to the world and the characters: it introduced a multitude of intriguing elements, but it seemed to be primarily setting things in place in preparation for the rest of the series.

In Cold Magic, Elliott has achieved a truly masterful piece of world-building. I am very interested to see how the character and conflict this novel introduces play out in the greater plot of the series.

Book two of The Spiritwalker Series, Cold Fire, will be released in September 2011.