The terrible New York Times and Slate reviews of HBO’s adaptation of George R.R. Martin’s Game of Thrones and what the authors had to say about fantasy and fantasy fans are very well known at this point, due to the viral circulation and quick and vociferous reaction they received around the internet. As it turns out, they are not the only news publications to print negative opinions or snide remarks about genre fiction and its fans.

A recent New York Times correction, which probably would have made any fan of fantasy smile approvingly, was delightfully nerdy:

An item in the Extra Bases baseball notebook last Sunday misidentified, in some editions, the origin of the name Orcrist the Goblin Cleaver, which Mets pitcher R.A. Dickey gave one of his bats. Orcrist was not, as Dickey had said, the name of the sword used by Bilbo Baggins in the Misty Mountains in “The Hobbit”; Orcrist was the sword used by the dwarf Thorin Oakenshield in the book. (Bilbo Baggins’s sword was called Sting.)

In the latest issue of the (neo)conservative The Weekly Standard (May 23rd 2011), took a stab at belittling the New York Times, and in the process was condescending toward fantasy fans. I know this magazine has nowhere near the circulation or reputation for quality that Slate or New York Times have, and certainly the reviews that brewed a shit-storm were certainly much longer and noticeable, but it’s just another example of the endemic condescension levelled at genre fiction/movies and fans. Here’s the very short snippet (p.4): 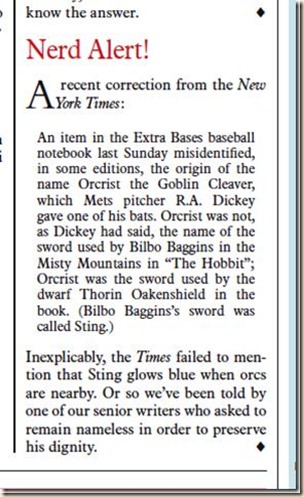 Why does the unnamed senior writer need to preserve his dignity? The Hobbit is a classic, so it’s not beyond the realms of possibility that someone writing for one of the most pretentious news magazines ever will have read it. This, I suppose, is more a complaint about the never-ending hypocrisy of The Weekly Standard than the general well-documented sneering contempt fantasy and other genre fiction fans are met with. But seriously, needing to protect your dignity for having read and enjoyed Tolkein? This is a magazine whose columnists have often referred to Wagner’s more fantastical work (in the original German, natürlich) while at the same time accusing President Obama of being an unforgiveable elitist.

This is the type of smarmy comment that gets us genre fans annoyed and roiled up (though, in fairness, mostly in a polite way). But, just as The Weekly Standard will take pot-shots at everything they think is below them, they just have to suggest that one must hide an interest, knowledge or love of fantasy in order to preserve one’s dignity?

I know I should ignore this sort of comment – just as I should learn to ignore when I overhear postgraduates say that they think fantasy and science fiction are infantile and (oh-so-eloquently that you can really see their tuition money was well-spent) “crap”, as they avidly read the latest Harry Potter or Twilight novel. For the third or fourth time.

Email ThisBlogThis!Share to TwitterShare to FacebookShare to Pinterest
Labels: Fantasy, I Know I Should Ignore This Stuff, Idiots, Journalism, Mainstream Ignorance