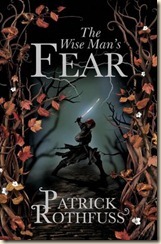 Day Two of the Kingkiller Chronicle

Picking up the tale of Kvothe Kingkiller once again, we follow him into exile, into political intrigue, courtship, adventure, love and magic... and further along the path that has turned Kvothe, the mightiest magician of his age, a legend in his own time, into Kote, the unassuming pub landlord.

Given the considerable anticipation for this novel, I thought I’d leave it a little to avoid the initial crush of reviews and blog-posts around its publication date. I thoroughly enjoyed The Name of the Wind, and I am happy to report that in many ways The Wise Man’s Fear lived up to its predecessor, but in others it fell short. This was a very enjoyable (though flawed) novel.

This is a novel of many parts (based on Kvothe’s education and adventures), however for me there were three distinct ‘sections’. The first section was a continuation of Kvothe’s education at the university, as he struggles to keep up with his tuition payments, avoid trouble and learn ever-more about the arcane arts on offer. The second section focuses on his forays outside of the university (in Severen, in Felurian’s domain, and his time with the Ademre). The final part is his return to Severen.

The novel follows a measured and comfortable pace, and we fall quickly back into the rhythms of the world, thanks both to Rothfuss’s inviting prose and his engaging and sympathetic characters. The characters who help shape Kvothe’s life at the Arcanum are great: not only is there Kvothe himself (in both his persona of Kote the innkeeper and narrator of the tale, and also the Kvothe of the past), but we learn more of Master Elodin (who is delightfully dotty), the loan-shark Devi, and Kvothe’s university friends and rivals. They are all three-dimensional, realistic, and fun to read about. I especially enjoyed the banter and friendship between Kvothe and his friends Simmon and Wilem. Rothfuss writes superb dialogue, at turns lyrical, serious, witty, whimsical and always eloquent. We got to know some of these characters so well in The Name of the Wind that it is not at all surprising how easy it was to sink into this second novel.

Not all of Rothfuss’s characters are as well-created as others. Denna, for example, is not the greatest love interest. She’s “artsy” and flighty, and comes with the baggage one might expect of this character type (she could be considered the first fantasy hipster). While we know from The Name of the Wind that Kvothe considers his relationship with Denna to be integral to his account of his life, I was frequently impatient with their story. Rothfuss doesn’t appear as assured when writing about love, and can sometimes come across as a little soppy or schmaltzy, and I felt that scenes between Kvothe and Denna kept the novel from moving forward properly, or at least sufficiently.

At the university, Kvothe continues his studies as an artificer, in Naming, and also his search for more information on the Chandrian (who wiped out his troupe at the start of The Name of the Wind). I found the descriptions of and scenes in the Archives/Library fascinating – somewhat reminiscent of Scott Lynch’s “In The Stacks” short story in Swords & Dark Magic (though still original). It is safe to say that The Wise Man’s Fear is strongest when Kvothe is recounting his time at the Arcanum.

Throughout the novel, the level of detail Rothfuss provides is considerable, which creates a rich and engaging world and cast of characters, but can sometimes favour description and character development over action. For the most part, the high quality of Rothfuss’s prose keeps the narrative from dragging: what in many other novels would be considered an overly-slow or uneventful few chapters becomes something else entirely in this author’s hands. However, in the middle portion of The Wise Man’s Fear, I found that my enjoyment of the novel began to flag in spite of Rothfuss’s excellent writing.

Once Kvothe leaves the university, things started to go a little wobbly. At first, it was refreshing to finally be getting a taste for the rest of the world Rothfuss has created, and the reader gets the sense that we are now moving properly forward to witness how Kvothe the poor Arcanum student grew into Kvothe the legend.

However, by this point, I’d read a chunk longer than most novels I’ve reviewed for the site, and I started to feel that it wasn’t moving as quickly as I would have liked. I was still compulsively reading well into the night and at every opportunity during the day, but I wasn’t loving it. It was certainly nice to get to see other regions and cultures of the world, and meet some new characters, but effectively halfway through the trilogy, we still had masses of ground to make before the Kvothe of the narrative resembled anything of the Kvothe of Legend. The balance of description started to be thrown out of whack – long descriptions of music that repeated much of what we’ve read before in both of Rothfuss’s novels; over-long descriptions of various aspects of the world; an over-long bandit hunt through the forests north of Severen; a frankly dull span when Kvothe is in Felurian’s company. It was frustrating to read the middle section of the novel, as it was nowhere near as good as The Name of the Wind or the start of The Wise Man’s Fear. It started to feel like work, just hoping that something momentous would happen which would move the story along. Each time Kvothe moves on to a new setting, there were a couple of chapters of intriguing discovery, only to be followed by slightly drawn-out events.

With Kvothe’s return to Severen, I became more engaged with the story again. Overall, I loved reading this novel – the first 40% and final 20% were excellent, well-paced and written in a highly engaging style. It engages many of the wish-fulfilment and fantasy parts of our mind: Kvothe is impossibly gifted, successful and lucky (not to mention can do magic). He lives a blessed life (despite his constant state of being poor, in a near-constant search for money to pay tuition or buy food).

I did find it frustrating that despite its length, this novel didn’t seem to go very far into the greater Kvothe legend: there is still, at the end of this novel, a lot of distance to make up between Kvothe the university student and Kote the innkeeper. Rothfuss will have a lot of ground to cover in the final novel of The Kingkiller Trilogy. This does suggest the third book is either going to be whip-fast or an absolute beast. (A mix of the two might work rather well, though.)

This is not an action novel, which may frustrate readers who prefer action-packed and breakneck-paced novels. The Wise Man’s Fear is a novel for savouring, one that you will sink into, and you should just let the prose wash over you. While the novel drags somewhat in the middle section, and there remain many questions to be answered and mysteries to be solved in Kvothe’s story, this is an enjoyable read.

Posted by Civilian Reader at 10:51 AM