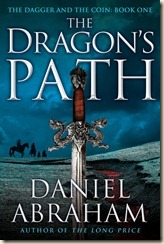 Book One of The Dagger & The Coin

The dragons are gone, the powerful magics that broke the world diluted to little more than parlour tricks, but the kingdoms of men remain and the great game of thrones goes on. Lords deploy armies and merchant caravans as their weapons, manoeuvring for wealth and influence. But a darker power is rising – an unlikely leader with an ancient ally threatens to unleash again the madness that destroyed the world once already. Only one man knows the truth and, from the shadows, must champion humanity.

The world’s fate stands on the edge of a Dagger, its future on the toss of a Coin...

The beginning of Abraham’s highly-anticipated new series, The Dragon’s Path is grand fantasy at its best, and entirely lived up to my expectations. After a solid first half, the novel blossomed in the second, proving that Abraham really is one of the best writers in the genre, willing to take some slightly unorthodox approaches to his storytelling. Readers who found The Long Price Quartet a little difficult will find The Dragon’s Path less dense, but no less intelligent or expertly crafted (although I have to say, I have never understood that criticism: I didn’t find TLPQ inaccessible at all). With The Dragon’s Path, Abraham has written a superb fantasy, set in an interesting and engaging new world.

The Dragon’s Path is set in a world of rival principalities, in a state of constant competition. The world was once ruled by dragons, but a slave revolt appears to have sent the draconian overlords into either hibernation or extinction. The Kingdom of the Severed Throne, based in the Antea region and ruled by King Simeon, is the strongest, and at the start of the novel, King Simeon has dispatched an invasion force to occupy the free city of Vanai. While the history and interrelations between the different principalities is not wholly explained, nor their relationship with the free cities (which, to my mind, are similar to the city states of medieval times), it is very easy to get a broad sense of how the world works.

The squabbles of nobles, that classic theme of both fiction and history (fantastical or otherwise), forms the backdrop to the individual tales of our protagonists. The cast of characters is pretty broad, yet the novel alternates between a handful of particular perspectives of key players. Politics and economics play central roles in the overall plot, but this still felt at heart like a very character-driven tale, and very quickly I came to care a great deal for the well-being of all the characters. After a brilliant opening chapter about an unnamed ‘Apostate’, which plants some seeds of mystery, the story picks up with the key protagonists (seriously, if it doesn’t hook you right away, there may well be something very wrong with you).

Cithrin, a ward of a bank since her parents died, suddenly finds herself tasked with smuggling the Medean Bank’s wealth out of the city, to prevent it from falling into the hands of the city’s conquerors. Disguised as a young man, she joins the last caravan scheduled to leave Vanai before the invaders arrive. Cithrin’s is a story of life ambushing a young, impressionable and thus-far protected woman, forcing her to grow up faster than she anticipated and confront the harsher realities of life in this world, and it’s a story Abraham handles well.

Former military leader Marcus Wester is getting out of Vanai before the fighting starts. Guarding the last caravan out of Vanai is far better than being dragooned into service by the city’s Prince – a man and cause he has neither loyalty nor love for. Along with his trusty second, Yardem, he gathers a troupe of guards to help protect the caravan on its difficult journey through the cold and harsh wilderness between cities. Those he hires are not your typical guards, but a bond is forged between them all, and events will transpire to keep them working together longer than they originally anticipated.

Both Cithrin and Marcus offer the reader different perspectives of their experiences first as part of the caravan, and later in Porte Oliva (where the caravan’s journey eventually ends). This offers some nice contrasts and juxtapositions, as their differing agendas and outlooks sometimes clash. As events change in the second half of the novel, their dynamic shifts, as a protective streak in Marcus wars with the fact that he doesn’t have any say over Cithrin’s life. As a character, Cithrin perhaps shows the most growth and change.

Through the eyes of Lord Dawson Kalliam, childhood friend of King Simeon, we see the complex politics of this world brought to life. Shifting alliances, deadly retribution, and questioned loyalties seem to dictate the lives of the powerful. Two factions – one conservative, one progressive, both supposedly loyal to the crown – are forming opposing cabals to either protect or change the way the world works. “The power of nobility for its own sake is passing,” Dawson is told, but he wishes to maintain aristocratic authority. Dawson’s frustrations with his king are palpable, as his life-long friend approaches the squabbling nobles hesitantly, lacking the fire he once embodied. It’s a fascinating look into the politics of the realm, and the reader is kept on tenterhooks throughout as events constantly shift, presenting new challenges and threatening long-prepared plans. I thought the role played by the noble wives was interesting: acting as peacekeepers attempting to temper the more bloodthirsty and excitable urges of their ever-scheming husbands.

Geder Palliako, the only son of a minor noble house, is far more interested in speculative essay than swordplay. He is frequently picked on by the other nobles, given the most menial of tasks, and the recipient of cruel practical ‘jokes’. When events conspire to thrust him into a position of power and influence – a position he never really wanted – he must turn all of his attention to exceeding the low expectations his betters have of him, while also attempting to avoid giving in to his desire for revenge. Geder is a rather tragic figure, in some ways, the pawn of distant power-brokers, but in the end his philosophical, pseudo-scholarly interests allow the reader to see more of the world and learn a little of its history.

Dawson and Geder are more obviously connected to the endless power struggles and jockeying for King Simeon’s favour – an increasingly weak king who is losing the respect of his nobles as he dithers and fails to pick sides; while Cithrin and Marcus offer a perspective of the world removed from intrigue, but equally tied to the whims the King’s Court, and later the Medean Bank. Events will push each character to make important decisions on their future. It is not entirely clear how things will play out in the long run (i.e. in future novels), but Abraham sets up his tale with a number of possibilities.

Abraham’s plotting is superb: the novel moves along at a fair pace, but never feels rushed. The more we read, the more we understand how these characters and events are connected. Some might wish the novel was more eventful (certainly in the first half), but as an opening book, I thought this set up the rest of the series very well, as we are given a proper introduction to the main characters. The author avoids clunky info-dumps and long passages of world-building, instead allowing our understanding of the characters, world and politics to grow more naturally; by allowing events to fill out a wider picture. If I had one minor complaint, however, it is that we still don’t know that much about the world and its history by the end of this novel – I would have welcomed a lot more. There are plenty of questions left unanswered, and Abraham has given himself a lot to tackle in future novels.

The author takes a look at the lesser-explored area of economics in his novel. That’s not to say he delves into the minutiae of an empire’s accounting, but throughout the story, he makes it clear how difficult paying for an empire is, not to mention the difficult financing required for a coup or counter-coup. The Medean Bank is in the background for the first half of the novel, but as events progress and tensions come to a head in Camnipol (the imperial capital), and Cithrin puts her daring plan into action, the bank’s importance, power and influence becomes plain – no doubt it will play a greater role in forthcoming novels. As in the real world, economics is at the heart of all things – certainly everything connected to governance – and in this world, money means the power to raise an army. And that’s how you really make your argument.

One of the key characteristics of The Dragon’s Path is the plethora of races that populate the world. If I’m entirely honest, I didn’t really follow exactly what was going on, or the significance of some of the races – in this first novel, about four of them predominate. Abraham has posted an article, An Introduction to the Taxonomy of Races, on his website in case you happen to get a tad lost (it might be worth including something longer in the mass-market paperback edition of the novel). It would appear that the races have been crafted by dragons to serve certain functions. After the slave races revolted, however, they became somewhat equal. The races Abraham has populated his novel with are intriguing and original, all humanoid but with varying physical and mental characteristics. It did take a little longer to get to grips with them than I normally might expect (or prefer) with a new fantasy series, but the way Abraham writes their differences is very good, and the reader won’t have any difficulty enjoying the story or engaging with them on an individual level if specifics aren’t clear (their trials and tribulations remain very familiar and human). This aspect of his world does make his novel stand out from many contemporary fantasies.

Abraham’s prose is inviting and natural, and you should find yourself whizzing through the pages as both his writing and the plot pull you along. The dialogue between all the characters is natural throughout, which only makes the politics and story all the more clear. I wish The Dragon’s Path had been longer, and really can’t wait for the second instalment in the series.

I was very anxious about starting this novel – I enjoyed Shadow & Betrayal so much, I was nervous about being disappointed – but I needn’t have worried. This not only lived up to my expectations, it exceeded them. I loved the characters, the world, and the overall politics, and the progression of the novel is perfectly balanced to keep the reader engrossed from the first page until the last. Each time I picked up the book, I very quickly sank back into the story, and I was kept up reading until I literally couldn’t keep my eyes open any more (three nights running, I was up until 3am).

The Dragon’s Path is a superb achievement, and one that should help Abraham reach the wider audience and acclaim he truly deserves. If you’ve never read any of his work, this is a perfect starting point: brilliantly written, with interesting and realistic characters, fluid prose, and an engaging world, The Dragon’s Path is very difficult to fault. Really very highly recommended.