“Battle of the Fang” by Chris Wraight (Black Library) 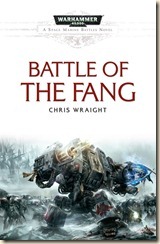 The Thousand Sons bring the fight to the Space Wolves’ homeworld

It is M32, a thousand years after the Horus Heresy. The Scouring is over and the Imperium at the height of its post-Crusade power. When Magnus the Red is tracked down to Gangava Prime, the Space Wolves hasten to engage the daemon primarch.

Even as Great Wolf Harek Ironhelm closes on his ancient enemy, the Fang on the Space Wolves home world is besieged by a massive force of Thousand Sons. A desperate battle ensues as the skeleton forces of Wolf Lord Vaer Greylock attempt to hold back the attacking hosts before the last of his meagre defences gives in. Though a single Scout ship survives to summon Great Wolf Harek Ironhelm back to Fenris, none of the defenders truly realise the full scale the horror that awaits them, nor what the Battle for the Fang will cost them all.

Continuing the story of the blood-feud between the Space Wolves and the Thousand Sons, Battle of the Fang takes us beyond the Horus Heresy, as the Thousand Sons stage a daring attack on the Wolves’ homeworld of Fenris. This is the first novel in the Space Marine Battles series that I’ve read, and it really is great. Evocative, brutal, and brisk, it’s exactly what I was hoping for.

After Graham McNeill’s A Thousand Sons and Dan Abnett’s Prospero Burns, it’s great to be reading once again about the continuing feud between the loyalist Space Wolves and traitorous Thousand Sons legions. Set a thousand years after the end of the Horus Heresy, the two legions find themselves in very different situations. The still-loyal Wolves have been harbouring and nurturing their hatred for the Thousand Sons for centuries, hunting for signs of their remnants so they can finish the job started on Prospero. For the traitors, on the other hand, it has only been a mere handful of decades, thanks to the time-altering nature of the Warp: the Sons who lead the strike against Fenris were present at the sacking of Prospero and the start of the blood feud between the two Legions.

The Space Wolves in this novel are a mixed bunch. They remain fiercely loyal to the Emperor and the memory of their Primarch, Leman Russ. But, over the millennia since the Scouring, the Legion is starting to show some cracks: We see the internal politics at play in their ranks – bickering factions and a slight conflict between the more traditional Wolves and those who want to allow the Legion to evolve; not to mention a secret shame over a failed successor Legion (which is hinted at throughout this novel). They are both savage and noble in many ways, given to reckless bursts of violence and sharp tactical brilliance. It is, however, unsurprising that their enemy is able to take advantage of their hubris and blood-lust to lure the bulk of the Legion away from their home world, leaving only a skeleton guard to defend the Fang. Their impetuous nature and pride could easily be their downfall.

Wraight continues the theme Abnett started in Prospero Burns – that of the Space Wolves as misunderstood by the rest of the Imperium:

“They were hunters, the Wolves, and nothing was more important than bringing the chase to a kill. Plenty in the Imperium thought of Russ’s warriors as savages, but that betrayed their ignorance of galactic history – the Wolves did what was necessary to complete the task, whatever it was. That was the trait they’d been bred for. To leave a slaying unfinished was a cause of deep shame, something that burned in the soul forever, chewing away until the ache was cleansed.”

While they come across as more brutish than Abnett’s Wolves, this is no bad thing, and Wraight has managed to update the Legion while also keeping intact their historical roots and eccentricities.

The Thousand Sons are a very different Legion: Bookish, considered, plagued by mutation because of their mastery of the Warp. The Legion’s tragedy, started by Magnus’s fall and the sacking of Prospero, has been further ?? by Ahriman’s Rubric, the spell that effectively turned the vast majority of Thousand Sons warriors into little more than animated suits of emotionless, characterless armour. Wraight has done a superb job of updating the Thousand Sons we got to know in McNeill’s Horus Heresy novel, while keeping the aesthetic and overall feel of the Traitor Legion intact. They have become debased examples of their former glory, having embraced their Traitor designation and succumbing more to the lure of Chaos. I still identify more with them than the Wolves.

One interesting facet to the story was that a number of the main characters of this novel are not typical of their Legions. Jarl Greyloc, the Space Wolf leader left in charge of the Fang, is unusually taciturn and measured for a Space Wolf, not as prone to the violent temper of his brother Marines, and sad that his legion has not evolved since its creation. Temekh, on the other side, is saddened and dismayed that his fellow Thousand Sons have become “parodies” of their former selves, as they embellish their armour endlessly, and also bemoans the demise of many of his brother-Astartes as a result of Ahriman’s Rubric (which turned a good portion of the Thousand Sons into mere animated suits of power armour: a catastrophic, accidental side-effect of the eponymous sorcerer’s attempt to halt the mutation that plagued his Legion).

The novel is not solely about the titular Battle of the Fang. Rather, it is the story of two battles and a third, smaller but no-less-important struggle aboard a scout ship. The siege and invasion of Gangava Prime is equally central to the story, as Great Wolf Ironhelm’s forces (all but one Great Company of the Legion) hasten to decimate once more Magnus’s diminished traitor legion. When Wraight describes this battle (predominantly in the second half of the novel), we see the Wolves unleashed and at war in the manner to which the Emperor always intended them to be: the executioners, overtly savage yet covertly strategically precise and brilliant. The author brings the conflict vividly to life on the page (in some scenes, they were better than the siege of the Fang).

Blackwing, another atypical Space Wolf (who voluntarily takes the role of a Lone Wolf scout), captains the Legion’s fastest space vessel, tearing through the warp to warn Ironhelm of the siege of Fenris. Similar to Greyloc, but more antisocial, Blackwing must keep his crew under firm control while also dealing with some unexpected stowaways who hope to thwart his attempt to recall the Legion from Gangava.

Wraight writes from a number of perspectives: ranging from the higher echelons of the Space Wolves and Thousand Sons, other members of those Legions, and also their human servants – we see far more from the perspectives of those Fenrisians who serve in the Fang than those who serve the Thousand Sons. It offers good variation and a nice mixture of impressions of the conflict, not to mention a good device to ‘show us around’ the Fang and reveal some of the mysteries and darker secrets hidden within. It’s very well done, and when you couple it with the fast-paced prose and intense action scenes, Battle of the Fang is certainly up there with the best novels published by Black Library. It’s not perfect – sometimes the perspectives changed just a little too often; there were a couple of instances when a particular story thread was getting exciting and then Wraight would suddenly take us to a different part of the battle. For the main, however, the author has deftly plotted this novel to keep the story moving and to keep the reader gripped.

Given some of the mixed response to Prospero Burns (some of it unfair), I imagine this novel will allay the concerns of those who were disappointed in the relatively short amount of space given to the Space Wolves’ assault on Prospero. Battle of the Fang offers the conflict and clash of arms between the Space Wolves and Thousand Sons in all its brutal, feverish, tense and gory detail. However, without Abnett’s novel, we wouldn’t have the more-rounded and nuanced impression of the Space Wolves that Wraight advances and builds on so well here. In this respect, Battle of the Fang forms a very worthy Third Part to this overall story.

Further in comparison with the Horus Heresy novels, it’s interesting to meet Magnus again – we’re familiar with the Primarchs as loyalists, some of whom turned traitor (a process we have been spectators to over the course of the Horus Heresy series), but we still have only seen the early years of the Heresy. By the time of Battle of the Fang, Magnus has been transformed by his wholehearted acceptance of Chaos, turned into a daemon (effectively, if not actually). It makes me interested to see how the other fallen Primarchs might be characterised in novels set after the Horus Heresy: I’m only aware of four Traitor Primarchs who survived the Heresy (Magnus, Angron, Mortarion and Fulgrim), but when I was reading the WH40k background stuff it was years ago, so I have no idea which others may have survived.

That the three novels in what can loosely be described as the “Space Wolves vs. Thousand Sons Trilogy” have been written by three different authors, and yet manage to build on and compliment each other so superbly just goes to show how gifted these authors are, and the strength of Black Library’s collaborative system. It’s a fantastic idea, tracking a bitter rivalry through history, and it would be interesting to see if it could be done with other ‘historical’ foes in this setting.

As an aside, I hope Black Library releases some novels set during the “Scouring”, mentioned in the synopsis. I don’t really know anything about what happened during this period of WH40k history (although I can guess – the name is not exactly opaque). Hopefully they’re thinking about this already.

Battle of the Fang is an excellent companion novel to A Thousand Sons and Prospero Burns; and I am looking forward to reading more of Wraight’s work (thus far, I’ve only read a couple of short stories and Sword of Justice, his first Warhammer Heroes novel).

It’s worth mentioning that the final 150 pages were superb – I kept reading well into the night, Wraight’s prose relentlessly pulling me through the story, so invested had I become in the fate of his characters. The final clashes are also gripping (not to mention, a little heart-breaking).

Overall, this was a solid action-packed sci-fi novel. A fast-paced and enjoyable read, with extra layers added to our understanding of the two Legions involved, and the years between the Horus Heresy and the ‘present’.

Highly recommended for fans of military sci-fi as a whole, and a must for fans of WH40k and Black Library fiction.