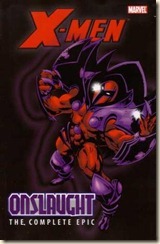 The Start of one of Marvel’s Momentous Cross-Title Events

The saga that literally re-made the Marvel Universe of the 1990s. The psionic force of nature known only as Onslaught sprang forth from the fractured psyche of mutant mentor Charles Xavier and the genetic terrorist called Magneto – touching off a cataclysmic conflict destined to deprive a world of its most revered icons.

My journey into Marvel’s X-Men comics continues, this time with the ‘event’ that took place before the series I read as they were released. This book collects a good number of the issues that started off the Onslaught era, from some of Marvel’s best writers and artists. While the book was enjoyable, it was not excellent. I’m also starting to notice a bit of a pattern in Marvel’s bad-guys, which I found a bit frustrating. [There are some spoilers in this review.]

In the Complete Onslaught Epic, a malevolent entity, which has been sowing the seeds of its arrival for some time, finally emerges. It is a shocking revelation for the X-Men team, and the book suggests a lot of great action and tension to come, but as the opening collection, there is still the feel that this is laying more groundwork for the next three books.

Having read the Prelude to Onslaught book, it was pretty easy to slip into the overall story. We also see some foreshadowing for Operation: Zero Tolerance, which is the large Marvel Event that followed the Onslaught Epic. The overall story of Onslaught looks promising, and I certainly liked the inclusion of the Avengers (who I’d not read anything about before). The plotting continues the slight choppiness of the Prelude book, but is nonetheless far tighter and more targeted. The choppy nature comes from the switching perspectives, as it did in the prequel, however in this book they are at least different perspectives of the same events, which allowed for a more seamless and streamlined story progression. The dialogue is decent, certainly better than some of the X-Men and comic dialogue I’ve read in other books/series, which bordered on condescending and simplistic.

The artwork throughout is solid and of the typical 1990s Marvel-style: the stylised, slightly-Manga-esque proportions of the characters in particular. The issues of The Avengers and Fantastic Four that were included in the book have a more classic art-style, which made an interesting difference, but lacked the vivid colouring of the X-Men titles. The Hulk/Cable issues at the end of the book ruined things a little – the artwork is very different, and at the moment, this strand seems like a red herring or distraction from the main event. Left me a bit disappointed at the end.

Now, on to the bit that will be spoilery.I didn’t find the major conceit – that Xavier is at the centre of Onslaught’s existence and power – all that exciting. Xavier-as-a-source-of-evil seems to be a popular trope for the X-Men writers (New X-Men has a similar plot-hook), but I find it actually a little underwhelming. He’s the most powerful psychic in the world, and he just seems to keep getting stuck in the middle of evil goings-on, and not realising that these things are going on. Maybe it’s a sign that he is far more hubristic than we are led to believe, but I don’t really buy it. In New X-Men, it was his sister who formed the central ‘bad-guy’ for the first book (she was also a psionic entity who takes his material form and causes havoc and mayhem). In Onslaught, the entity takes over Xavier’s body, builds a “psionic” outer-body that has a striking resemblance to Magneto’s outfit and colourings, and eventually runs rampant. The nod to Magneto’s aesthetic is because Onslaught is a blending of Xavier’s power and Magneto’s fervour and anti-human sentiment, and the latter forms Onslaught’s raison d’etre: to speed up the human-mutant conflict to ensure mutantkind’s predominance. So, really, this is just business as usual for the X-Men universe.

I’m not sure if I’m just not that into X-Men/graphic novels any more, or if I’ve OD’d on too many first instalments as I try to find a series I can sink my teeth into, but I didn’t love this. It was fun, sure, and the considerable breadth of the cast means all the familiar and favourite faces make an appearance.

I think I might try one more first instalment (the X-Men series written by Joss Whedon), but if that fails to ignite my interest, I’ll have to accept that my tastes have changed and I prefer reading novels and enjoy the Marvel world(s) mainly on the big screen.