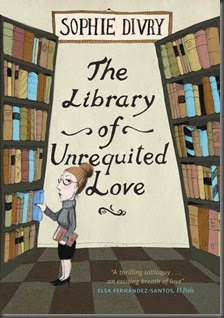 One morning a librarian finds a reader who has been locked in overnight.

She starts to talk to him, a one-way conversation that soon gathers pace as an outpouring of frustrations, observations and anguishes. Two things shine through: her shy, unrequited passion for a quiet researcher named Martin, and an ardent and absolute love of books.

What a peculiar little book. The Library of Unrequited Love is a 98-page, stream-of-consciousness, single-paragraph monologue. Ordinarily, such a description would be an automatic turn-off for me. This, however, was a very endearing read.

Someone has been locked in a library over-night, and in the morning an old librarian finds him as she prepares to open up. Rather strangely, instead of being particularly concerned, the librarian goes on a great, long, free-form ramble that covers a broad-range of topic – from libraries, books, librarians-vs.-readers, society, and, of course, Martin (who has attracted her eye and is the emerges-late-in-the-story focus of the title).

Given its extremely brief length, it’s difficult to know how to approach it for a review. Reynolds has done a great job with the translation, and there’s a great flow to the narrative. We really get a sense of the librarian’s character, her biases and tastes. There’s a wealth of information and great commentary, too – especially on the subject of libraries. Here are just a couple of nuggets.

First, a thought on the strange people they attract, but also why they’re important in the Summer:

“… libraries do attract mad people. Especially in summer. Of course, if you closed the libraries during the summer holidays, you wouldn’t see them. No more lunatics, poor people, children on their own, students who’ve failed their exams, no more little old chaps, no more culture and no more humanity. When I think that some mayors dare to close their libraries in August. Just to cut down on costs. Barbaric. Think of it: when the town’s sweltering in the heat, the shops are all shut, the swimming baths are full, people’s purses are empty, their pay’s too low, and they’re brooding over their problems in the shade, with the tar melting on the road, the house of culture could be opening its arms to all those children lost in an ocean of urban idiocy, but no, his nibs the Mayor has closed the library … What’s the little old pensioner going to do in August? I’ll tell you: he gets up on Tuesday morning, he takes the only bus of the day, and he toddles along slowly to the entrance of the library, because for twenty-four hours he’s been looking forward to a nice long day spent in an air-conditioned reading room, leafing through his favourite newspapers, and then like a stab in the back, or Napoleon’s coup d’etat, my poor little pensioner sees the criminal notice on the door: Closed until September … Nothing is sadder than an empty library.”

And also this amusing interpretation of the never-ending war that takes place in a library:

“I’ll tell you how it works. The library is the arena where every day the Homeric battle begins between books and readers. In this struggle, the librarians are the referees. In this arena, they have a part to play. Either they’re cowards and take the side of the mountain of books, or they bravely help the worried reader. And in this fight, you have to let your conscience be your guide. But librarians aren’t automatically on the side of the humans, don’t be fooled. You don’t realize, but you’re a flock of sheep in our hands, you think you’re gambolling about free as air, but there are wolves everywhere lying in wait for you, cyclops, sirens, naked nymphs, oh, the pity of it … A barricade only has two sides and I know which side I’m on, comrade. I’m here to help the poor, depressed, thirsty reader faced with the crushing prestige of the Army of Books.”

Overall, then, I would strongly recommend this to anyone who was brought up visiting libraries and thinks of them fondly, any bibliophile, and also anyone who has a couple of hours to fill and doesn’t want to dive in to a new full-length novel quite yet.

Posted by Civilian Reader at 10:16 PM