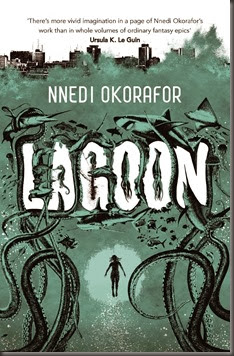 A gripping, beautifully-written science fiction novel set in and around Lagos.

The world will never be the same.

Three strangers, each isolated by his or her own problems: Adaora, the marine biologist. Anthony, the rapper famous throughout Africa. Agu, the troubled soldier. Wandering Bar Beach in Lagos, Nigeria’s legendary mega-city, they’re more alone than they’ve ever been before.

But when something like a meteorite plunges into the ocean and a tidal wave overcomes them, these three people will find themselves bound together in ways they could never imagine. Together with Ayodele, a visitor from beyond the stars, they must race through Lagos and against time itself in order to save the city, the world... and themselves.

This is the first novel I’ve read by Nnedi Okorafor, and it won’t be my last. I started reading it on the first day it arrived in the mail – I was putting it on my TBR shelf, and flipped it open at the first page. Thirty minutes later, I was still reading and had sidelined my then-current read. Lagoon is beautifully and intelligently written, addictive, well-paced and a must read.

What would happen if aliens landed on earth, and didn’t settle on a “developed” country to make contact? Or a city that is already suffering from deprivation, crime, and social disruption? A country that was utterly unprepared to deal properly with such a shock? Well, it might be something like Lagoon. The novel focuses on three strangers, who are on the Lagos beach when the aliens’ craft lands off the coast. Dragged into the water, they are confronted with the visitors and become de facto mediators between the new arrivals’ ambassador and what quickly becomes a very twitchy local population… On top of this, each of the three has a secret, which are only revealed mid-way(ish) through the story. Over the course of the novel, we’re given a tour of a city going to hell, as vying factions try to make sense of what they are experiencing. Tensions rise, hysteria boils over, and yet the author also maintains attention on her protagonists’ other challenges and difficulties.

Lagoon is a great novel. I was sucked right into the story, and Okorafor’s writing is pretty much perfect. Her prose just flows, and I was sucked in and pulled along from start to finish. (I read this very quickly, and was kept up well into the night both night I was reading it.) The book is filled with interesting details, fascinating and varied characters, and a good amount of social commentary. The author doesn’t hold back in pointing out the challenges facing Lagos and the forces that are keeping it down: be it the feral gangs, militant (and manipulative) religious groups, corruption, crime in general, a near-untouchable military, backward social mores (involving gender roles and ‘place’), and not a few others. Okorafor weaves all of these issues into the narrative brilliantly, never burying the story in the commentary, while keeping it prominent. The characters are also flawed, and prejudices aren’t glossed over or explained away. A couple of the secondary characters are awful, especially when presented with the secrets of people they believed were close friends.

The characters, in particular, are great guides to not only their city but also the events that unfold around them. There’s some gentle, excellent humour, too. And a near-heart-wrenching interlude from the perspective of a seven-legged spider… The novel is both unique and also pleasantly familiar – the author has taken some classic Alien Visiting tropes and twisted and tweaked them into something new. The meeting of these aliens and also the mystical forces of Lagos is also fascinating (if, perhaps, the only thing that isn’t as well-developed as the characters and everything else in the novel). The supernatural and science fictional elements of the story could have clashed horribly, but the former actually remained rather subdued until the final third of the novel. There was a moment when I wondered where it had all come from, and the road spirit kind of came out of nowhere, but I think it’s pulled off rather well. Some things are left unconcluded at the end, which I thought was appropriate (to explain why will give away the ending, so… just accept that vagueness…).

Lagoon is a great novel. A must-read. Highly recommended.