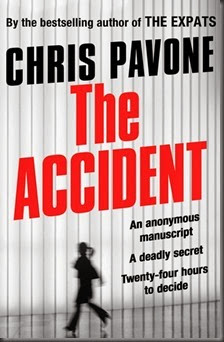 An engaging suspense, featuring a secret manuscript, a conspiracy, and unwitting pawns caught in the middle.

As dawn approaches in New York, literary agent Isabel Reed is turning the final pages of a mysterious, anonymous manuscript, racing through the explosive revelations about powerful people, as well as long-hidden secrets about her own past. In Copenhagen, veteran CIA operative Hayden Gray, determined that this sweeping story be buried, is suddenly staring down the barrel of an unexpected gun. And in Zurich, the author himself is hiding in a shadowy expat life, trying to atone for a lifetime’s worth of lies and betrayals with publication of The Accident, while always looking over his shoulder.

Over the course of one long, desperate, increasingly perilous day, these lives collide as the book begins its dangerous march toward publication, toward saving or ruining careers and companies, placing everything at risk—and everyone in mortal peril.  The rich cast of characters—in publishing and film, politics and espionage—are all forced to confront the consequences of their ambitions, the schisms between their ideal selves and the people they actually became.

The action rockets around Europe and across America, with an intricate web of duplicities stretching back a quarter-century to a dark winding road in upstate New York, where the shocking truth about the accident itself is buried.

Pavone’s The Expats was an international bestseller – one I seem to have missed almost entirely. When The Accident popped up on NetGalley, though, its synopsis sent it right to the top of my Must Read titles. The story is located at the confluence of a number of my key interests: politics, media, international relations/espionage, and publishing. While the novel is not perfect, it is nevertheless a gripping, fast-paced thriller that entertained and gripped me from the start.

The novel details the treacherous passage-to-publication (maybe) of a manuscript that reveals some dark secrets from the past of one of the world’s most powerful media Tycoons – he is a Rupert Murdoch type, but more evil. The author of the manuscript, who remains anonymous throughout, despite plenty of evidence to suggest who it is, has orchestrated an elaborate plan to get the book into the hands of a specific literary agent in New York. He has done this because he knows the way she thinks, and the editor she is most likely to submit the book to (the editor in question is keen on conspiracy books, and desperate for a hit to help right the listing ship of his career).

The novel is filled with plenty of nice touches throughout – especially when discussing or focusing on the publishing side of the story – Pavone offers plenty of commentary (some endearing, just as much snarky and cynical), no doubt borne of certain personal experiences?

The story moves at a fair clip, and I really did have difficulty in putting this down – either because I had to sleep or start work. Pavone’s prose is quite excellent, and will pull the reader on from the first page until the last. The fact that revelations abound throughout the story (almost right up until the end), will likewise keep you on the edge of your seat. (I figured out the full identity of the anonymous author only a few pages before it was revealed.) 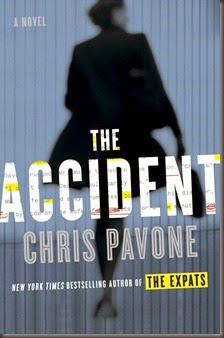 There was perhaps only one thing that stood out as problematic: the speed with which Isabel figures out certain things. For example, she cottons on to the fact that she’s being shadowed very quickly indeed, and seems to have a prodigious knowledge of evasive tactics and counter-espionage tricks. Some of these leaps were sudden, but given the flow of the narrative, the concern was minimal. They kept the novel moving, but perhaps could have been more gradual? It didn’t feel particularly realistic that some of these characters would be as gifted or quick on the uptake with regards to the considerable (highly competent) surveillance they were under, nor did I find it so believable that they would be able to fool their pursuers at nearly every turn. Their luck is considerable…

Pavone has a real talent when it comes to characterisation. Each of the people we spend time with are well-constructed and, for the most part, highly realistic (more on this in a moment). I particularly liked the way the author gave passages from different perspectives a different feel. For example, the few parts from the perspective of the McNally & Sons copyeditor were detail-filled and precise. For the main, then, the characters have distinct voices. Sometimes, the male characters blended a little bit, and there were a couple of moments when, after starting a new scene or chapter, there was a moment of “Wait, which one is he again?” These were fleeting moments, but they were there.

Apart from these acceptable and forgivable niggles, this was a very good novel – I particularly loved the classic-feel of the conspiracy side of the story (which was frankly refreshing after a decade and a half dominated by US/CIA-vs.-Islamic Terrorists novels). With a couple of good twists and reveals near the end, this is an engaging story, well told.

All in all, this was a fun read. The Accident is definitely recommended to all fans of gripping suspense novels. I think I will have to quickly move The Expats higher up my TBR mountain...

Chris Pavone’s The Accident is published in the US by Crown Publishing, and in the UK by Faber & Faber.