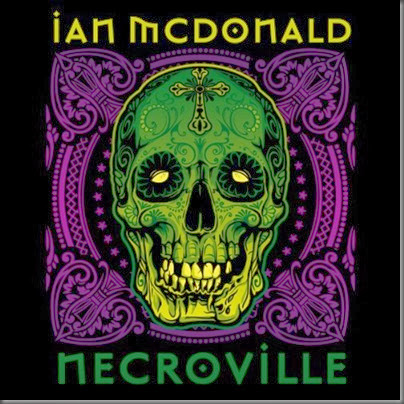 Ian McDonald is an author I have always wanted to read, but either never got around to, or I have just not had the chance to get hold of his books. This year, Audible are releasing new audio editions of a handful of his earlier novels (some of which have also been released as eBooks by Open Road Media). One novel of his in particular that I’ve been interested in is Necroville, which was released as an audiobook this week. And I just really liked that new cover (above), which has a certain Cinquo de Maio feel to it – alternatively spooky and groovy. It would make a great rock/metal album cover, too, I think. Here’s the synopsis…

In the Los Angeles ghetto of Necroville, the yearly celebration of the Night of the Dead – where the dead are resurrected through the miracle of nanotechnology and live their second lives as non-citizens – becomes a journey of discovery and revelation for five individuals on the run from their pasts.

With his customary flair for making the bizarre both credible and fascinating, McDonald tosses aside the line of demarcation between living and dead in a story that confronts the central quandary of human existence: the essence of non-being.

Necroville is published by Gollancz in paperback and eBook. In the US, it is Terminal Café for reasons that I cannot fathom.

Posted by Civilian Reader at 3:42 PM