“Brotherhood of the Storm” by Chris Wraight (Black Library) 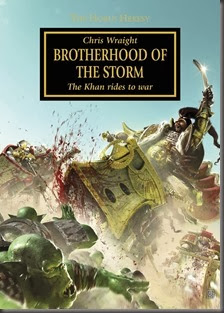 As word of Horus’s treachery spreads to fully half of the Legiones Astartes, Terra looks to the remaining loyalist Space Marines to defend the Imperium. One group, however, remains curiously silent in spite of apparent efforts from both sides to contact them – the noble Vth Legion, Jaghatai Khan’s fearsome White Scars. In the ork-held territory of Chondax, a bitter war has been raging since the Triumph at Ullanor, and only now do the sons of Chogoris return their gaze to the heavens...

Originally published as a limited edition, Black Library has finally released Brotherhood of the Storm for a wider audience, in both hardcover and eBook. It’s well timed, as the characters within feature prominently in the latest full-length Horus Heresy novel, Scars. And, happily, this does not disappoint – Wraight has really upped his game with his Heresy fiction. While this novella was not quite as good as Scars, it was still a cracking story, filled with a good balance of furious action and away-from-the-battlefront context and character development.

The story starts off from the perspective of Shiban, a White Scars Khan (captain), who is in the middle of a campaign on a wind-swept planet very much like the Scars’ home planet – sweeping plains, perfect for the Legion’s fast-attack strategies and way of war. His fellow captain, Torghun also features. The two of them are key characters in Scars, and so I guess this novella is set sometime in between the flashback and ‘present’ chapters of the novel. Brotherhood of the Storm, therefore, works as a pretty good introduction to the White Scars and characters who continue on into the novel. Through Shiban’s eyes, we see the White Scars’ ferocity and poetic glee for warfare. We also see minor tensions between the Chogorian Astartes and their Terran-born comrades. Wraight did a good showing readers how Torghun’s Terran sensibilities struggle in the face of Shiban’s more Chogorian, charge-first approach.

We’re also introduced to General Ilya Ravallion, a human Munitorum officer, who has just been assigned to quartermaster for the White Scars. She first meets with the man who previously held the position, and he expresses quite some exasperation at the Legion’s different structures, lack of adherence to Imperial norms, and so forth. She is also attempting to organise an introduction with the Primarch, to express the Munitorum’s concerns for resupplying the Legion, and the difficulties their disregard for proper protocol presents the inflexible Imperium bureaucracy. She does, eventually, meet the Primarch – it was a nice addition, as it’s the beginning of what forms into the friendship (or, at least, mutual respect) we see in Scars.

The third perspective we have in the novella is that of Targutai Yesugei, a stormseer and Jaghatai Khan’s main advisor. We are basically given his origin story, showing us how his psychic powers manifested and how he came to join the White Scars and the Primarch’s inner circle. He reminisces about his solo journey to discover himself in the mountains, the manifestation of his powers, and the peculiar vision/visitation he experienced while up there. This latter does a good job of throwing some doubt and nuance onto the White Scars’ place in the universe and also the impending Heresy, and reflects their coming test of loyalties: he’s confronted by four creatures who are clearly aspects of the four main Chaos powers, and also the Emperor (of whom the other four appeared afraid). Interesting stuff.

Wraight’s prose is good – fluid, not florid, and the author resists the temptation to over-describe. It can be a bit clipped in style, but it worked. The battle scenes are appropriately fast-paced, furious, but never frantic, and Wraight maintains control of the narrative flow throughout. All in all, a worthy, engaging and enjoyable addition to any growing Horus Heresy library. Recommended.