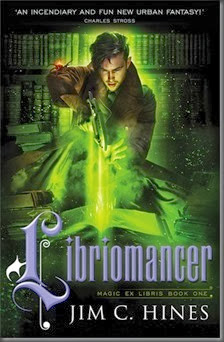 Isaac Vainio is a Libriomancer, a member of a secret society founded five centuries ago by Johannes Gutenberg. As such, he is gifted with the magical ability to reach into books and draw forth objects.

But when Gutenberg vanishes without a trace, Isaac finds himself pitted against everything from vampires to a sinister, nameless foe who is bent on revealing magic to the world at large… and at any cost.

This novel is an urban fantasy with a difference, and one that should really appeal to a broad swathe of SFF bibliophiles. Indeed, it has a little something for everyone. It’s fast-paced, amusing, cleverly devised, and above all enjoyable.

There’s a lot going on in the novel. The world building and magic system are great, and certainly endearing to someone who reads as much SFF as I do. How often have you wished you could reach into a book and take something out of it? Well, in Libriomancer, that is exactly what the protagonist is able to do. Using this device, Hines is able to mention a whole host of classics of the SFF genres.

“Libriomancy was in many ways a lazy man’s magic. There were no wands, no fancy spells, no ancient incantations. No hand-waving or runes. Nothing but the words on the page, the collective belief of the readers, and the libriomancer’s love of the story.”

One of the things that really shines through, therefore, is the authors clear love for these authors, novels and genres. It is also through this device that Hines is able to make his urban fantasy tale stand out from the pack – this is not your average UF, by any stretch of the imagination. In some ways, though, it is every urban fantasy – the proliferation of vampire fiction, for example, has had a real impact on the world in which Issac et al operate: there are now so many different variations of vampire (and werewolf, etc., etc.), all inspired or caused by accidental meddling with the contents of series. 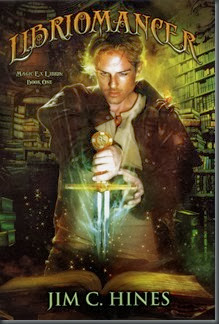 For the most part, the novel rattles along at a good pace, and from the moment Isaac’s library is invaded by vampires at the start, until the revelations and ‘boss fight’ at the end, it rarely lets up. I felt a slight dip in the middle, perhaps, but it picks up again nicely, once Isaac and Lena start making proper headway into their investigation. The characters are varied and well-rounded, and develop appropriately over the course of the novel. Hines writes some great combat/fight scenes, too, taking full advantage of how varied a battle can be when you have a potentially limitless variety of weapons to choose from (assuming, of course, that you have the appropriate book to hand…). This could have felt silly or forced, but it didn’t – the author managed to make this unbelievably awesome skill fit very well into the story, and he places ‘realistic’ limitations on the magic, too. I really wish I was a libriomancer… And I would also like a pet fire spider. Despite the fact that it would probably make my skin crawl…

Speaking of Lena, Isaac’s partner. I’m not 100% sure that her origin story and nature, and the way they are handled in the story, really do what they’re supposed to. That may sound vague, but I don’t want to ruin the story for others, and it’s not really that central a concern for the story. I think he was trying to make a statement about the male gaze, masturbatory teenage male fantasies, and so forth, but I don’t think the point was made as well as intended. I did, however, also learn why people find Gor novels so hilariously awful (I’ve seen them mentioned a lot, but had no clue what they were, or why they were considered so terrible). Certainly, Hines is able to weave into the story some good commentary on the state of the genre(s), and contemporary conversations and debates that are energising the readership and blogosphere, without it being clunky.

Alongside the excellent magic system, there was also some interesting commentary on contemporary, non-fiction issues. Particularly, PTSD, and the way they Hines attached this to the libriomancer idea of “locking” people (and books). I thought he handled and discussed this very well. (It is, again, not a huge part of the story, but it stood out for me.)

Overall, then, Libriomancer has a really intriguing premise, and is very well-executed urban fantasy. This was my first Hines novel, and it won’t be my last. Roll on the sequel, Codex Born! 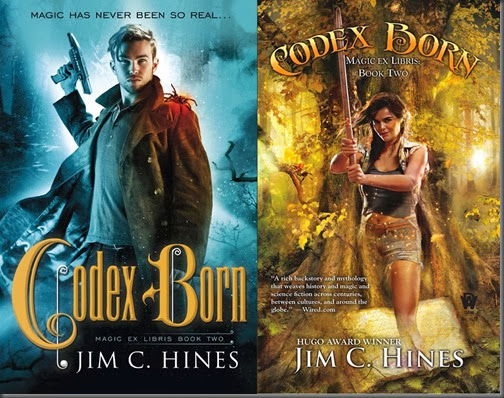