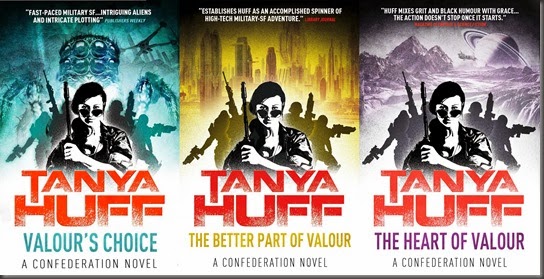 These three novels – Valour’s Choice, The Better Part of Valour, and The Heart of Valour – are the first in Huff’s Confederation series, which have finally made their way to UK shores thanks to an extensive new deal with Titan Books (who are also publishing Huff’s Enchantment Emporium novels, The Silvered, and, perhaps, more in the future?). The series is already at five books in the US (published by DAW), with a sixth, Peacemaker (TBC) in the works. These novels are a lot of fun.

The main character, Sergeant Torin Kerr is a great protagonist, and a great guide to this future setting. She is likeable. She plays the part of frontline officer who is willing and able to keep the Top Brass in check, able to navigate military politics without treading on others’ toes. She’s a great character – gutsy, capable, and kick-ass. Everything a reader could hope for, from a veteran Marine.

Kerr’s tendency to talk back does bite her in the ass in The Better Part of Valour, when she is sent on a “special mission” for speaking her mind to a superior officer: she is assigned as leader of protective detail of a scientific exploratory team, who have been dispatched to investigate an enormous, derelict spaceship. Naturally, things do not turn out as simply or as smoothly as originally hoped. By the third novel, Kerr’s military career has become a bit less action-packed, and she’s found herself sidelined into attending endless briefings and debriefings, with no apparent end in sight. So, when she’s offered the chance to go to Crucible, the Marine Corps training planet, as a temporary aide to Major Svensson, she readily agrees. It was meant to be an easy assignment, lasting no more than a month, while the Major tests out his new body (his previous deployment reduced him to little more than a brain and a spinal cord…). Upon arrival on the planet, however, all hell breaks loose, and it’s up to Kerr to look after a platoon of green recruits, to keep them alive until the cavalry (hopefully) come to rescue them.

The other races Torin and her comrades face and fight are all interestingly portrayed and developed – whether they are villains or just strange allies (who, uh, eat humans…), they can be just as fun as the more humorous characters. Through the various species’ and characters’ interactions, Huff does a good job of exploring our reactions to the Other, and also how we can overcome differences to work together for common purpose.

The battle and combat scenes in all three of the novels are very well-written: intense, fast-paced and ‘realistic’ – no doubt, the author has benefited from her own military career and also her family’s. Although, I must admit that reading about the characters and seeing them interact and develop was more of interest to me (military sci-fi is not my usual bag of tea). After reading these, I’ll have to check out The Silvered (fantasy) and also The Enchantment Emporium (urban fantasy) – it’ll be interesting to see if Huff writes as well in those genres as in this one, although I have no doubt she does.

Overall, therefore, while Valour’s Choice is perhaps my favourite thanks to the newness and sense of discovery I felt while reading it, the series maintains its quality and addictiveness over the next two books – there’s a great balance of humour, story, and action. The changing supporting cast also keeps the stories fresh, although sometimes they took a little bit of getting used to. The novels are quick, fun reads that are not dumbed down. I blitzed through them, and can’t wait to read the next one! Keep them coming!

Valour’s Choice, The Better Part of Valour, and The Heart of Valour are all available now in the UK from Titan Books. The fourth and fifth novels in the series – Valour’s Trial and The Truth of Valour – will be published in April and June, respectively.