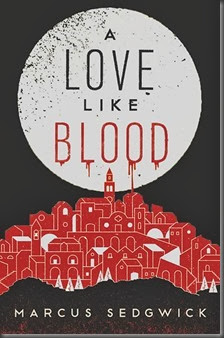 “I’ve chased him for over twenty years, and across countless miles, and though often I was running, there have been many times when I could do nothing but sit and wait. Now I am only desperate for it to be finished.”

In 1944, just days after the liberation of Paris, Charles Jackson sees something horrific: a man, apparently drinking the blood of a murdered woman. Terrified, he does nothing, telling himself afterwards that worse things happen in wars.

Seven years later he returns to the city – and sees the same man dining in the company of a fascinating young woman. When they leave the restaurant, Charles decides to follow...

A Love Like Blood is a dark, compelling thriller about how a man's life can change in a moment; about where the desire for truth – and for revenge – can lead; about love and fear and hatred. And it is also about the question of blood.

This wasn’t what I was expecting. I had expected a good novel, with perhaps a supernatural component. Instead, what I found was an excellent psychological thriller about obsession and the science and mythology of blood. Sedgwick’s first novel for adults is damned good, and a must-read of the year.

When in France as part of the liberation force, Charles Jackson catches a glimpse of what he thinks is a vampire. Spooked beyond belief, he never forgets that moment. After returning to Paris, he catches another glimpse of the man he believed to be drinking the blood of that woman, back in the chaotic days of the closing moments of the War. He befriends an American student researcher, who appears to have been drawn into the Vampire’s circle. He falls in love, and things get very, very personal and strange from there on.

A trained haemotologist, at (effectively) the dawn of proper research on the blood-related sciences and medicine, he becomes obsessed with what he saw, and what he learns about the man and, eventually, those who may be helping him. His life is completely changed by that moment in Paris, and his obsession and single-minded focus to discover if what he saw was supernatural or if it has a more mundane – though no stranger – explanation. Charles takes any opportunity to discover what’s really going on, and over the course of decades, he travels across Europe seeking out mentions or glimpses of this strange man. The further he investigates, the more he obsesses, the more he realises that his curiosity will never be satisfied until he uncovers the whole truth (whatever that might be), and also that he is trailing someone with a lot more power and influence than he expected. And certainly more resources than he can muster. As Charles’s life is turned upside down, we follow his journey, and see the friends and loved ones who are hurt along the way.

This is a brilliant novel. I was hooked from the start – not only was the story compellingly told, but Sedgwick writes really excellent prose. I was pulled on, and the mixture of thriller, suspense, horror, and even a dash of amateur espionage was melded together into one of the best novels I’ve read in a while. His characters are realistically drawn, and their interactions and relationships feel real and authentic, even in more strange circumstances.

It’s difficult to write about the story any more than I have, without throwing out spoiler after spoiler. There plenty of tense moments, interspersed with moments of quieter storytelling, and also plenty of genuinely fascinating information about the science and mythologies of blood – from Dante to vampirism, from haemophilia to other blood disorders, the novel is, basically, all about blood. I’d love to know how long it took the author to compile all this science and information. There is also a moment, late in the novel, which made me flinch in horror on the Tube…

If you’re looking for a gripping, superbly-written thriller, then A Love Like Blood is perfect. I highly recommend this. A contender for best thriller of the year, certainly.

A Love Like Blood is published on March 25th by Mulholland Books. He is a multi-award nominated author of YA fiction (not sure if/what he’s won). I think I may have to check out some of his other work.