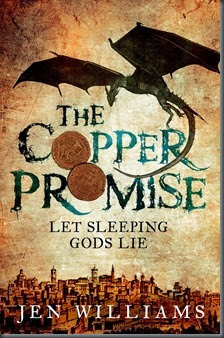 Lots of people have discussed the rise of grimdark, the loss of fun and adventure in fantasy of late. Personally, I’m rather fond of grimdark. I’m also rather fond of more fun-loving, adventure- and quest-focused fantasies of the ‘classic’ mould. The Copper Promise manages to straddle both of these camps rather skillfully. A lot of people are going to like this.

And, indeed, there’s a lot to like: some good protagonists to guide us through the world, plenty of action to be survived and enjoyed (as a spectator), dragons to fight and be killed by, dungeons to explore, treasure to be found, magic to be wielded, and pirates to fend off. The world is well-drawn and well-developed, and feels fully-formed very quickly. Readers will be drawn to the Band of Adventurers-style story that we’re thrown in to pretty much right off the bat. It was great to see the story unfold, and the heroes’ struggle against what they unleash from beneath the Citadel is epic and varied.

And yet. The Copper Promise didn’t excite me as much as I had expected. Yes, it was fun. Yes, I kept reading and Williams can certainly write both more serious and also wittier sections. But. It took me a while to really get hooked into the story. There were moments of exposition that verged on info-dumping (especially near the beginning). While well-written, the characters didn’t seem too inspired at first blush, and seemed to come right out of Fantasy Central Casting: a mischievous, reckless thief; a taciturn, moralistic and conflicted former knight. They were, however, pretty well-written characters, and Williams fleshed them out well over the course of the novel.

I felt that Wydrin’s quips and/or snark near the beginning of the novel sometimes verged too close to Lorelai Gilmore-like frequencies – it was like we were really meant to know that the character was sarcastic and feisty, and maybe it was a bit overdone. True, it fits her cavalier, act-first-think-later attitude to adventuring (and looting), and it did balance out later. But it irked me at the beginning (perhaps a result of my mood at the time I read it, perhaps not). Lord Frith, Wydrin and Sebastian’s benefactor, is a less grimdark version of Abercrombie’s Inquisitor Glokta, only high-born and less misanthropic, but equally driven and focused on his cause. Perhaps that’s a rather lazy comparison (Frith was also crippled by torture), but the connection popped into my head immediately after reading the prologue and then again after we are reunited with him and he hires Wydrin and Sebastian. Speaking of the three of them, they worked pretty well as a group, and I enjoyed reading about their exploits.

The issues I had with the novel were minor, but they were also clear. Along with the aforementioned niggles with regards to the characters, there were also occasional pacing issues – when the narrative felt a little uneven. And at other times, the characters’ speech patterns shifted from more ‘natural’ to forced or affected, which felt a little jarring as they were predominantly written in a very natural, engaging way – there were even a few moments of what felt like Renaissance Fair-esque weirdness near the beginning. I also think it could have done with being just a bit shorter – tightening up may have helped with the pacing issues.

A lot of people will like this novel. For me, this is a good novel, and one that looks back at what used to make fantasy so much fun and addictive and contemporizes it rather well. The sense of adventure, the quirky characters… a big, fuck-off dragon. That kind of thing. But, after finishing, I was not left with the sense that this had been a spectacular read. It will certainly be interesting to see what the author comes up with next. Williams can definitely write, and has obvious talent and love for the genre (there are so many lovingly adopted tropes and genre conventions that are gleefully included and tweaked).*

A cautious recommendation, therefore. If you are looking for a fantasy novel that has a classic sense of fun coupled with a more contemporary style, then The Copper Promise should suit your needs. I look forward to reading Williams’s second novel.

The Copper Promise was received from both Headline and also as part of the Hodderscape Review Project.

* I am, of course, purely speculating about any levels of authorial glee.

Posted by Civilian Reader at 10:40 PM