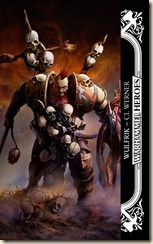 Emerging from the mists, Wulfrik the Wanderer brings destruction and death everywhere he treads. Cursed by the Ruinous Powers, the champion must travel across the Old World and seek prizes to appease the forces of Chaos.

But now dark forces plot against Wulfrik, and he must discover the enemy within or else his soul will be lost to the Dark Gods forever.

In the second Warhammer Heroes novel, a champion of Chaos takes centre stage. This time, it is Wulfrik, a Norscan champion, who has attracted the attention of the capricious Chaos Gods. After loudly boasting that he was the superior of any foe, from the realm of the living or otherwise, the gods visited Wulfrik in a vision.

“The gods were displeased with his proud words. However, it amused them to allow Wulfrik the opportunity to prove his arrogant boast.”

Because of the curse, Wulfrik

“would wander the world, seeking battle to prove himself the equal of any warrior, mortal or spirit, living or undead. He would make offerings to the gods he had offended, offerings the gods themselves would choose.”

The gods, interested in any way they can toy with mortals’ fate, fully expect Wulfrik to fail, to be bested by their next chosen sacrifice. In order to facilitate his challenges, they have given him the Gift of Tongues – an ability to instantly know and speak any language he may need. Ultimately,

But Wulfrik means to confound the gods’ expectations…

Wulfrik’s curse makes for a brilliant premise, as it has almost limitless potential. Each future novel (if there are any) could be set anywhere in the Warhammer world, as Wulfrik hunts any number of champions from the broad range of races that populate this world. With Werner’s writing, the novel is dark and brutal, while also retaining depth (this is not a mindless hack-a-thon) and being populated by interesting and complex characters. In this novel, Wulfrik’s curse takes him from the snowy northern peaks battling fearsome yhetees, to the land of men, elves and Chaos-corrupted dwarves.

Werner’s grim writing style is once again on top form – his novels about the Bounty Hunter Brunner were grittier and bloodier fare than Black Library released at that time; recent novels have become more ‘adult’ (not in that way!), unafraid of war-related taboos or enjoying a spot of gratuitous violence. That being said, the best authors are still those who can temper this obsession with violence, focussing more on character and plot. Werner is an author who finds a middle ground – he is able to write realistic battle-scenes that are grim and brutal, but without dispensing with character development. As the novel progresses, we get a more rounded, nuanced picture of the reavers who accompany Wulfrik on his quests – with a small number of whom Wulfrik forms a bond of brotherhood, while retaining a callous disregard for newcomers.

The context is brutal, but Werner is still telling a story about nuanced characters, not just mindless killing-machines (as the Empire’s propaganda machine might have us believe). They exist in a brutal realm – in between the land of the humans and other fair races, and the twisted Chaos Wastes. Their lives are martial and difficult, strength and toughness valued over other virtues. The Norscans’ home environment is harsh, the demands of their gods are frequently fatal and so any novel in this setting that didn’t have a darker, harsher feel to it wouldn’t be true to its subjects.

Matching the practices of the real-world inspiration for the Norscans, the novel is written in a rather saga-like fashion – or, at least, that’s the feel the novel has for me. Dialogue is spare and kept to a minimum, with more focus on narrative, atmosphere, action and what’s going on inside Wulfrik’s (still taciturn) mind. Werner’s very good at describing the locations he sends Wulfrik to. Be it the biting cold of snowy peaks, or the hot and oppressive land of the ‘fire dwarves’ (Chaos Dwarves of the game), we get a great sense of the settings and their atmospheres throughout the novel.

The saga-like style was certainly interesting, though it did make the novel slower to sink into. When the story got going, however, I found myself caught up in the Wulfrik’s saga. [Which, if we wanted to be authentic, would be known as “Wulfriksenna” in the Old Norse. Never thought that university elective would come in handy…] Like the best Black Library and Warhammer novels, this had me reading well into the wee hours of the morning.

There’s more going on in this novel than just Wulfrik’s missions – in fact, his gods-delivered missions form a smaller part of the novel than one might expect. Our champion is presented with a tantalising offer by a wandering sorcerer, one that could have great consequences for his life and afterlife. This offer sends him off on a personal quest, which forms the majority of the novel. While dealing with his curse, Wulfrik must also navigate the local politics of his people, and the imperfect and time-bending nature of his travel arrangements. King Viglundr, the lord of Ormskaro, uses Wulfrik’s long absences to plot against him and manoeuvre around the promises that have been made to him for his service, leading to a tragic betrayal.

The battle scenes in Wulfrik are detailed and well paced, but not gratuitous or over-long – Werner gives us a good sense of the speed and confusion of the violence, not to mention the furious prowess of the Norscan reavers – particularly Wulfrik, although it’s important to point out that he is no mindless, Chaos-worshipping berzerker, either. The champion must always weigh the possibility that the gods would grow tired of his curse and let him die an ignoble death, he also has something to live for and that gives him a human fear of dying too soon. This vulnerability opens him up to temptation and exploitation by others with devious and evil agendas.

I preferred this to Sword of Justice, although that was also a very good novel. Wulfrik is, however, quite different, and it appeals more to my taste in BL (and fantasy in general) fare: it’s a little darker, grittier and the characters are a little more interesting in their impurity and questionable morals. If you like your fantasy with a classic, darker hue, then Wulfrik should definitely appeal.

Adventure, glory, honour and betrayal are at the centre of the novel, and in classic saga-fashion, the love of a woman forms the root of the characters’ oh-so human failings. Wulfrik is a great addition to the series, written by a gifted author. Highly recommended for anyone who likes their fantasy a bit darker. This was a very enjoyable read.