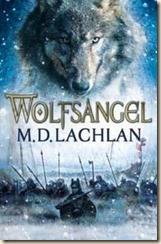 An original, enjoyable take on Norse mythology and Werewolves

The Viking King Authun leads his men on a raid against an Anglo-Saxon village. Men and women are killed indiscriminately but Authun demands that no child be touched. He is acting on prophecy. A prophecy that tells him that the Saxons have stolen a child from the Gods. If Authun, in turn, takes the child and raises him as an heir, the child will lead his people to glory.

But Authun discovers not one child, but twin baby boys. Ensuring that his faithful warriors, witness to what has happened, die during the raid Authun takes the children and their mother home, back to the witches who live on the Troll Wall. And he places his destiny in their hands.

And so begins a stunning multi-volume fantasy epic that will take a werewolf from his beginnings as the heir to a brutal Viking king, down through the ages. It is a journey that will see him hunt for his lost love through centuries and lives, and see the endless battle between the wolf, Odin and Loki – the eternal trickster – spill over into countless bloody conflicts from our history, and over into our lives.

Wolfsangel has been left unread for far too long, so I finally forced myself to put down the new and upcoming releases and give this novel the attention it deserves. As a big fan of werewolves, Norse mythology, and weird and dark fantasy, everything I had heard about this novel suggested it would be perfect for my tastes. After reading Wolfsangel, I was certainly not disappointed. Lachlan is a gifted author and one who clearly loves his chosen subject and historical setting, which makes this novel is a must-read for fans of dark fantasy tinged with atmospheric horror elements.

The novel focuses on the lives of the two brothers, raised in very different circumstances, and the transformations they are forced to undergo in a relatively short period of time. Vali, raised as Authun’s son; and Feileg, raised by a family of Odin-worshipping berzerks. Their lives are, of course, very different, and when they finally meet it is not a happy family reunion. Vali is a strange character: to begin with he seems more sensitive than your average Norseman in his thoughts, but he also sometimes acts like a spoiled rich kid. His treatment of and lack of respect for Bragi, his mentor, sometimes jars with his general demeanour, but we slowly come to realise that Vali has learned his lessons of politics and strategy. A strange character, Lachlan keeps us guessing for a long while what sort of person he is, who he will become, and how we’re supposed to feel about him. Feileg, on the other hand, is hard as nails, resourceful and independent: he adopts a wolf-like aspect, mentality and persona, and is fierce and sometimes brutish, given to berzerker-type bouts of sheer violence. When he meets Adisla, Vali’s low-born love, Feileg becomes more human and sheds some of his wolf-like persona. One thing that was particularly noteworthy about Wolfsangel is that, while set over only a number of months, the characters are visibly effected and changed by the ordeals they experience, and we see some proper character development throughout the novel – even a handful of minor characters evolve as the novel progresses.

Norse culture was violent, and Lachlan does not shy away from the grittier and grimmer realities of life in medieval Scandinavia. From raids to single combat, the author really puts the reader into the heart of the action; it is close, brutal and often highly personal. Certainly, Wolfsangel contains some of the best, most realistic fight scenes I’ve read in a while. The author also does a great job of explaining the politics of the times, not to mention the shifting patterns in religion and allegiances.

Lachlan’s writing has a certain quality that sucks you in and draws you on through the story. It’s very difficult to describe if one’s not an English Lit major; but at its best it is captivating, and very atmospheric. The author’s prose is wonderfully evocative, and there is a great, tense atmosphere about the novel. The Norse way of life and their world is fully realised on the page, and you get the sense that the author did a lot of research to make everything feel natural and also realistic and authentic (see the author interview, below). From the idyllic farmsteads where Vali grows up, to the stygian darkness of the Troll Wall (the home of the witches and their queen), Lachlan has a gift for giving the reader a solid impression of what a place might actually be like.

The final quarter of the book throws a lot of what we think we know about the characters and their roles out the window, and the complexity of the conspiracy at the centre of the plot is fully, satisfyingly revealed. Lachlan weaves the machinations of the gods, their human subjects and their enemies deftly; the specific plot and mythological elements expertly woven into an interesting and original plot. That Lachlan keeps to the spirit of Norse mythology throughout the novel is one of its greatest strengths. For example, the magic system and the rituals that comprise it are sacrificial and masochistic in nature, mirroring the sacrifices that Odin had to make in order to gain wisdom and magical knowledge. The nature of the magic also lends itself to the stranger passages in the novel, which come in the form of hallucinations and dreams – I’d recommend making sure you can pay attention throughout these sections.

The magic system Lachlan has incorporated is harsh and brutal, and I thought it was very different from your standard fantasy magic systems (it’s in no way flashy, for one thing). The transformations that take place to turn a man into a werewolf are also handled in a great, original way (actually, it’s a more classical approach than contemporary readers will be familiar with), and is very different to what you might be familiar with. It should be noted at this point that this is not your standard werewolf/supernatural novel. It is far more about Norse mythology and mysticism, and is all the better for it.

If I had one criticism of the novel, it concerns pacing. The momentum of the plot is not overall consistent. After a few early chapters that enjoyed a quick pace, the momentum started to have peaks and troughs that were occasionally quite noticeable. This is odd, actually, as the first few chapters are usually the slowest in any new fantasy series, as the author is forced to do some initial world-building and lay the groundwork for the story to come. In Lachlan’s case, it is clear that one of his fortes is when writing about the Norse and their myths. There was also a short section in the middle that was thematically a tiny bit repetitive (capture, escape, capture, escape). The pacing issues are overcome in the final quarter of the book: there’s a nice surprise at about the 72% mark (thank you, Kindle progress tracker…), which I wasn’t expecting and certainly made the final chapters less predictable. As the pace and tension pick up again dramatically in the final 25% of the novel, as plots and transformations come to fruition, and as the struggle between Odin and Fenrisulfr at the root of the story is laid bare, the novel offers a satisfying climactic battle and some highly intriguing suggestion for future novels in the series.

To sum up, I would say that Wolfsangel is a highly recommended historical fantasy. It may not suit everyone’s taste (be it for the pacing concerns I mentioned earlier, or maybe the lack of ‘overt’ fantasy elements), but I think if you give it a try you will be rewarded for doing so.

Dark, atmospheric, original… This is a great read.

Posted by Civilian Reader at 2:29 AM