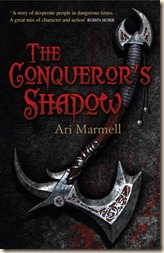 A brilliant new fantasy, with a sense of fun and a classic feel.

They called him the Terror of the East. His past shrouded in mystery, his identity hidden behind a suit of enchanted black armour and a skull-like helm, Corvis Rebaine carved a bloody path through Imphallion, aided by Davro, a savage ogre, and Seilloah, a witch with a taste for human flesh. No shield or weapon could stop his demon-forged axe. And no magic could match the spells of his demon slave, Khanda.

Yet just when ultimate victory was in his grasp, Rebaine faltered. His plans of conquest, born from a desire to see Imphallion governed with firmness and honesty, shattered. Amid the chaos of a collapsing army, Rebaine vanished, taking only a single hostage – the young noblewoman Tyannon – to guarantee his escape.

Seventeen years later, Rebaine and Tyannon are married, living in obscurity and raising their children, a daughter and a son. Rebaine has put his past behind him, and given up his dreams of conquest. Not even news of Audriss – an upstart warlord following Rebaine’s old path of conquest – can stir the retired warrior to action.

Until his daughter is assaulted by Audriss’ goons.

Now, to rescue the country he once tried to conquer, Rebaine once more dons the armour of the Terror of the East and seeks his former allies. But Davro has become a peaceful farmer. Seilloah has no wish to leave her haunted forest home. And Khanda... well, to describe his feelings for his former master as undying hatred would be an understatement.

But even if Rebaine can convince his onetime comrades to join him, he faces a greater challenge: does he dare to reawaken the part of him that glories in cruelty, blood and destruction? With the safety of his family at stake, can he dare not to?

I’ve not got much experience reading Marmell’s work. I do know his Vampire: The Masquerade novel, Gehenna: The Final Night, which I thought was good, but I am not familiar with his roleplay output at all. Despite his success in the US, the author doesn’t appear to be too-well-known in the UK; it probably doesn’t help that I’ve yet to actually see a copy of Conqueror’s Shadow in any bookstore, despite it’s recent publication over here.

The author’s first foray into an entirely original setting, the Conqueror’s Shadow exceeded my expectations, and I thoroughly enjoyed reading it.

The Conqueror’s Shadow is lighter in tone than much of the top fantasy output these days, despite some of the sinister and grim content. One gets the sense that Marmell wants his novel to entertain just as much as make the reader think on its themes – maybe more, and for this reason we are put in mind of early, classic fantasies. That being said, despite its classic feel, The Conqueror’s Shadow still retains a contemporary ‘grittiness’, and can sit comfortably alongside the novels of Lynch and Abercrombie, while also appealing to fans of Gemmell and Erikson. If I had to choose one of Marmell’s peers to compare him to, I would say that Scott Lynch is probably the closest in style and quality, if not content. At the same time, his world had a similar feel to that in the Fable computer game series.

The humour Marmell sprinkles throughout the novel is good – it’s made up of understated quips, sarcastic or amusing comments, observations and asides, rather than laugh-out-loud moments. It doesn’t always work (sometimes the comments fall a little flat, or come a little too close together), but rarely did I go a chapter without smiling or chuckling at a comment or snippet of dialogue. Marmell’s writing can lean towards the flamboyant or florid on occasion, but it’s easily forgiven as the pace of the story and quality of the plot and writing pulls you quickly onwards.

Marmell writes all of his characters well and realistically. His companions are well-rounded and their banter makes it easy to visualise them as a loyal, if difficult, band of warriors. The more you read, the more you will become invested in the fates of Davro, Seilloah, and you’ll even come to like Khanda. There’s an interesting twist about three-quarters of the way into the novel, wrapped around a red-herring that was satisfyingly dealt with. Audriss never comes across as clichéd or cartoonish. The author’s take on vampires, the “Eternal Legion”, is pretty sinister and an interesting, original take on the supernatural species. The relationship with Corvis and Tyannon was initially difficult to accept (it felt like an extreme example of Stockholm Syndrome), but as we get to know Rebaine it feels more plausible.

The author has a good knack for describing locations and atmosphere: his descriptions are sparse, but still evocative, allowing the reader’s imagination to fill in the blanks, or the perspective of the characters to fill out our impressions. A good example is Rebaine’s walk into Theaghl-gohlatch, the (horribly “fantasy”-named) haunted forest in which he searches for a former companion. Rebaine is clearly spooked by his surroundings, with all-too-human and familiar fears and phobias creeping into his thoughts.

In general, Marmell’s characterisation is solid and very believable, and I don’t think any characters came across as contrived. The dialogue is fluid and quick, as are the author’s prose. The plot rattles along at a fair clip, which is a very good thing as this is not a short novel. I was never bored, reading this, and never felt myself starting to skim-read. Rebaine struggles with the ease with which he falls back into the role of warlord, and some of the actions he condones (sometimes without all the information) haunt him.

I thoroughly enjoyed reading The Conqueror’s Shadow. It is a fantasy novel that invites you in and allows you to stay for as long as like, entertaining you all the way. It was easy to sink into each time I picked it up – unfortunately, there were altogether too many other things going on while I read this – although I still managed a couple of into-the-wee-hours reading sessions, and found myself grabbing any and every opportunity to read even just a couple of pages. The characters are all well-realised, engaging and likeable, and it was fun to get to know Rebaine and his companions over the course of the novel. Marmell draws on a number of classic fantasy tropes and makes them his own – we have a band of ‘heroic’ companions, a quest to retrieve long-forgotten treasure, and also an evil marauder to slay.

Marmell maintains a sense of fantasy, wonder and fun in his novel that sets it apart from many of his contemporaries. This is a great fantasy novel and getting inside the mind of a former-marauder, and one who is all too familiarly human, is a welcome premise.

Very highly recommended, The Conqueror’s Shadow is an absolute pleasure to read, and offers an alternative to the more ‘gritty’ fantasy output that dominates at the moment (not that there’s anything wrong with this type of fantasy). I really can’t wait for The Warlord’s Legacy.

The Warlord’s Legacy is is published in the US in January 2011 by Spectra, and UK in May 2011 by Gollancz.

Posted by Civilian Reader at 9:12 PM