Continuing the Orbit Books-theme we’ve been enjoying this month on the site, here’s an introduction to Daniel Abraham’s upcoming The Dragon’s Path – the first novel in the new The Dagger and the Coin series from the author of the critically acclaimed The Long Price Quartet. I have read the first half of that series (collected in the Shadow & Betrayal omnibus), and I’ll be trying to get to the second half of the series (Seasons of War) before Abraham’s new novel hits the shelves.

Some of you might have read my “Coming up in 2011” post a couple of weeks back that also featured The Dragon’s Path. Why revisit it so soon? Well, for one thing, the lovely people at Orbit have just revealed the final cover artwork – and it’s much better than the ‘original’ (which as actually still pretty good).

Here it is for your viewing pleasure, designed and “noodled with” by Lauren Panepinto: 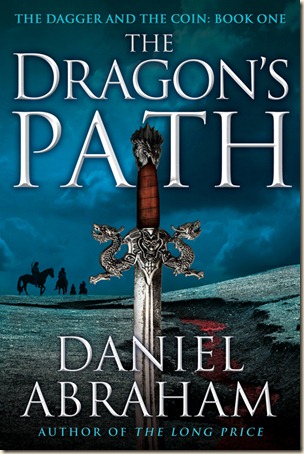 Here’s the teaser synopsis, too:

Summer is the season of war in the Free Cities.

Marcus wants to get out before the fighting starts. His hero days are behind him and simple caravan duty is better than getting pressed into service by the local gentry. Even a small war can get you killed. But a captain needs men to lead — and his have been summarily arrested and recruited for their swords.

Cithrin has a job to do — move the wealth of a nation across a war zone. An orphan raised by the bank, she is their last hope of keeping the bank’s wealth out of the hands of the invaders. But she’s just a girl and knows little of caravans, war, and danger. She knows money and she knows secrets, but will that be enough to save her in the coming months?

Geder, the only son of a noble house is more interested in philosophy than swordplay. He is a poor excuse for a soldier and little more than a pawn in these games of war. But not even he knows what he will become of the fires of battle. Hero or villain? Small men have achieved greater things and Geder is no small man.

Falling pebbles can start a landslide. What should have been a small summer spat between gentlemen is spiralling out of control. Dark forces are at work, fanning the flames that will sweep the entire region onto The Dragon’s Path — the path of war.

If you haven’t checked out Abraham’s writing yet, his work is epic fantasy, with – at least in terms of The Long Price Quartet – an eastern flavour, and in my opinion some of the best writing in any genre, let alone just fantasy. His novels aren’t necessarily the quickest reads, but neither are they on the scale of Robert Jordan and/or Brandon Sanderson. I was very much blown away by Shadows & Betrayal and only through other commitments did Seasons of War slip through the cracks – something I am very eager to rectify.

The Dragon’s Path is published by Orbit Books in April 2011, and is one of my Most Anticipated Books of 2001.

Posted by Civilian Reader at 2:21 AM