Continuing the Black Library theme we’ve got going here on CR, and because we always like eye-catching artwork, here’s the recently-released cover (and synopsis) for Rob Sanders’s upcoming Atlas Infernal novel: 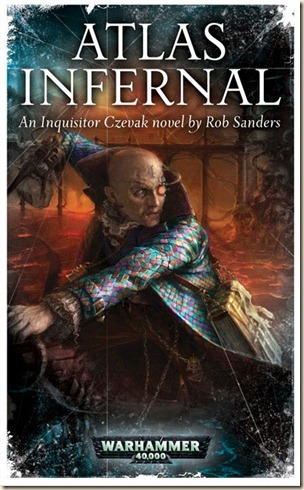 Inquisitor Bronislaw Czevak is a hunted man. Escaping from the Black Library of the Eldar, Czevak steals the Atlas Infernal – a living map of the Webway. With this fabled artefact and his supreme intellect, Czevak foils the predations of the Harlequins sent to apprehend him and thwarts his enemies within the Inquisition who want to kill him.

Czevak’s deadliest foe, however, is Ahriman – arch-sorcerer of the Thousand Sons. He desires the knowledge within the Black Library, knowledge that can exalt him to godhood, and is willing to destroy the inquisitor to obtain it. A desperate chase that will bend the fabric of reality ensues, where Czevak’s only hope of survival is to outwit the chosen of Tzeentch, Lord of Chaos and Architect of Fate. Failure is unconscionable, the very cost to the Imperium unimaginable.

Sanders, who also wrote the brilliant Redemption Corps for Black Library, is a very talented writer, so this promises to be another engaging sci-fi action novel. The fact that the tag on the cover is “An Inquisitor Czevak novel” suggests that there could be more to come, so let’s hope it lives up to expectations.

That Ahriman features in the novel is intriguing – those of us who have been reading the Horus Heresy novels will know him from Graham McNeill’s New York Times-bestselling A Thousand Sons. I’ve also been waiting for a new inquisitor-focused novel or series from BL – ever since Dan Abnett’s Eisenhorn and Ravenor series ended, none have been quite as satisfying as I think they could be, leaving the interesting inquisitors relegated to additional or minor characters (although both Sandy Mitchell’s and Henry Zou’s were pretty good).

[Atlas Infernal will be published by Black Library in July 2011]