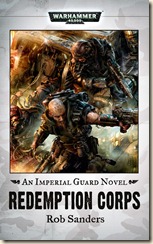 Led by the fearsome Major Mortensen, the Redemption Corps is a regiment of ultra-tough storm troopers sent to the deadliest warzones on missions of mercy and destruction. But when Mortensen comes to the attention of the deadly sorority of the Battle Sisters, he not only has an ork invasion to contend with but these fearsome warrior-fanatics too.

Caught between the xenos and the fury of the Imperium, can the Redemption Corps fulfil their mission as well as survive their own side?

This is the first novel in the Imperial Guard series that I’ve read, and I am rather impressed. My initial, less-than-eloquent thought as I read the introduction was “Damn, this is good”, and that impression remained with me throughout the novel.

The Volscians, the overall regiment Mortensen and new cadet-commissar Krieg are attached to, are a rough bunch: lots of home-world hive-gang loyalties remain, undermining protocol and sometimes peace/unit cohesion on the transport ships. Krieg’s introduction to his unit (and Mortensen’s) adds yet more colour to the portrayal of life and service in the Imperial Army. Krieg is sent to join the regiment to do “The Emperor’s work... slowly”; because of their entrenched loyalties, biases and proclivities, the Volscians are unlikely to accept any thing buts “change, at a pace”. A slow one, much to Krieg’s annoyance. We meet Mortensen, already attached to the Volscians, when he is ordered to put down a bloody mutiny. (If this chapter doesn’t make you respect the Redemption Corps, then nothing will – simply put, they are harder as nails.)

Redemption Corps embodies the aesthetic and atmosphere of the Warhammer 40,000 universe perfectly: grim, dangerous, gritty, and violent; populated by a vast, diverse and colourful cast of characters – the good, the bad, the ugly, and the in-between. None of them is from central casting, all are slightly (or largely) flawed, fallible and three-dimensional (even the emotion-stripped co-pilot of Rosencrantz’s ship feels more realistic than characters I’ve read in more hyped and ‘respectable’ fiction). The dialogue is crisp and clipped, avoiding cliché and always realistic.

Sanders has a gift for making both the macro- and micro-scale of life in this grim future feel intense and gripping. When Mortensen’s looking out over a city at war, or when his storm troopers are fighting through the corridors of a transport ship, or the streets of the city, you get a sense of the atmosphere, the scale of devastation or intimate tension. The action, which comes at you from almost the beginning of the novel, is fast and furious, bloody and in-your-face.

Occasionally succumbing to the temptation of including a textual flourish (sometimes they work, sometimes they don’t), Sanders is a confident writer whose prose  is quick-paced and he’s able to draw the reader along with the story (it was very difficult to put this novel down). His prose is very well crafted, often minimalist, but able to convey a great deal – painting just the picture he wants us to see, without over-describing or adding extraneous wordage and exposition. After dealing with the mutiny aboard the Deliverance, for example, Sanders’ description of the recuperating Major Mortensen is pithy:

“Leaning forward he put his head between his knees, the sickening tang of adrenaline subsiding, and slowly bled.”

Sometimes the description is a little over-done, but mostly the author manages to bring the universe to life on the page. I wouldn’t go so far as to say you can ‘smell the cordite’ and ‘hear the gunshots’ (I’m British, after all, and not overly prone to hyperbole), but he gets pretty close. The Warhammer 40k universe offers near endless, colourful possibilities for imaginative world-building, and Sanders does a great job with each of the worlds his characters visit: Illium, the Mechanicus world, is a hive of industrial sectors and areas devoted to the worship of the Omnissiah (the ‘Machine God’) – vast, choking, awe-inspiring edifices cover the world, every inch developed and put to use by this or that fabricator. Ishtar is the polar opposite - a “deathworld”, where every bit of flora and fauna is deadly (even some geological formations, including “cryogenic swamplands” and flensing glass forests). Both of these worlds, as well as a couple of others mentioned in the novel, are vividly realised, and Sanders is able to really give us a sense of what it would be like to be there. His descriptions of Ishtar and the ordeals of his characters there are particularly vivid.

Sanders includes some interesting and refreshing, classic-40k elements, in a measured-reveal towards the end of the novel (I wasn’t expecting it, so I shall also not spoil it here). It feels like an age since a Black Library novel featured these antagonists – the focus now seems to be mainly the grand, Imperial-Chaos struggle (no bad thing, of course: the Horus Heresy and Gaunt’s Ghosts series remain my favourite Black Library novels).

Highly recommended for fans of military science-fiction, and certainly all fans of Warhammer 40,000 and other Black Library releases. Redemption Corps is a thoroughly enjoyable science fiction war novel.

Posted by Civilian Reader at 9:11 PM