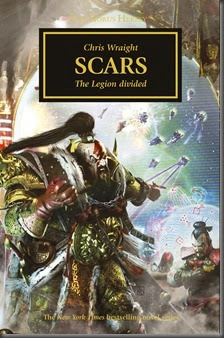 The final serial episodes of this Horus Heresy novel

Of all the Legiones Astartes, the White Scars of Jaghatai Khan remain the most enigmatic and elusive. Born of a civilisation that prizes honour, speed and fearsome loyalty, their allegiance has yet remained unclear even as the galaxy is torn apart by Horus’s treachery, and both sides have apparently counted them among their potential allies in the war to come. But when the Alpha Legion launch an unexplained and simultaneous attack against the White Scars and Space Wolves, the Khan must decide once and for all whether he will stand with the Emperor or the Warmaster... or neither.

I’m going to keep this very brief, as this review covers the final quarter of a novel. Why ruin it for everyone? The synopsis above is that for the novel as a whole. I must say it is possibly Wraight’s best so far. Everything I’ve reported on from the first nine episodes is just as evident and well-written as in the chapters that have come before. We learn more about the White Scars, and their strange place alongside the other Legiones Astartes, and the Imperium at large. Wraight sets up a lasting conflict and antagonism that (I assume) continues into the “present” Warhammer 40,000 timeline. Two Primarchs face off against each other, and the result of that exchange dictates the fate of the White Scars going forward. These three episodes pack in a lot of action, and the battle-scenes are very well-written (better, even, than Wraight’s Battle of the Fang). I particularly liked the attention paid to the Scars’ as a Legion split in two – mainly because it’s not been particularly well-addressed in other novels. Wraight’s writing is excellent throughout – clear, crisply composed, and briskly paced.

To be honest, a good amount of the story’s impact was lost as a result of the serialisation – hitting cliffhanger moments works for TV series, but not so much for a Horus Heresy novel. Even though I read them in chunks or multiple episodes, I’m used to read a novel in no more than five days (when they’re really long) and as little as one or two days. Stretching one out over a couple of months just didn’t work for me. An interesting experiment, though.

Nevertheless, with the whole novel now available, I would certainly recommend this as a must-read for all fans of the Heresy series. Wraight’s first full-length foray into the era is a triumph of military sci-fi. I certainly look forward to his next offering.

[I’m going to work at filling in those review-blanks – some I’ve already read, but there are a couple of oversights that need addressing. As I am always thirsty for more Heresy fiction, I think I may have to catch up pretty soon. Starting with Graham McNeill’s Mechanicum. Fallen Angels is the only other I’ve never read.]

Posted by Civilian Reader at 9:07 PM