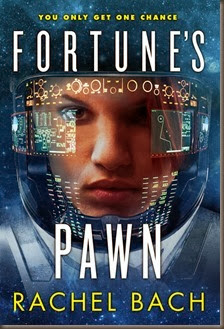 Devi Morris isn’t your average mercenary. She has plans. Big ones. And a ton of ambition. It’s a combination that’s going to get her killed one day – but not just yet.

That is, until she just gets a job on a tiny trade ship with a nasty reputation for surprises. The Glorious Fool isn’t misnamed: it likes to get into trouble, so much so that one year of security work under its captain is equal to five years everywhere else. With odds like that, Devi knows she’s found the perfect way to get the jump on the next part of her Plan. But the Fool doesn’t give up its secrets without a fight, and one year on this ship might be more than even Devi can handle.

I only heard about this series a few weeks ago. About the same time, I learned that Rachel Bach was a pseudonym for Rachel Aaron, the author of the amusing Eli Monpress fantasy series (also published by Orbit). Knowing that, I had a good idea of what I might find in Fortune’s Pawn, and my interest rose as a result. On the whole, this met my expectations, and while flawed, I think it’s a fun, breezy start to a new sci-fi series that will please a great many readers.

“Unlocking my armor case always felt like opening a birthday present. I’ve been obsessed with powered armor for as long as I can remember. There’s just something magical about the idea of a lovely machine that slides over your body and makes you superhuman.”

This is from one of the first scenes in which Devi is working with her armour. I really liked the way Bach wrote the protagonist’s near-fetishisation of her armour – it is, I believe, borne of a lifelong familiarity (at least) with RPGs: Devi talks about modding, saving up for this or that upgrade, and more. Reading some of these portions tapped into a very nostalgic part of my brain. It also meant for a very strong start. What follows is a somewhat typical Newbie on the Crew storyline, but with added mystery. We’re introduced to some of the main characters – although, a few remain somewhat peripheral, despite the relatively small crew. There’s some planet-hopping, some encounters with things that want to kill and eat Devi and her new companions. There is gun-play. There are hints of something way bigger than Devi and her ambitions.

Bach writes in a very easy, relaxed and welcoming style. There’s lots of details early on about Devi’s armour, how she’s named her weapons, almost anthropomorphises them, and more. This actually fits her character, though: she’s basically a powered-armour junky, single-mindedly focused on climbing the various ladders she can find in her chosen field. She’s like Ripley from Aliens, mixed with most of Michelle Rodriguez’s movie roles, and any number of other bad-ass warriors. For the most part, she is a convincing character – she felt realistically hard-headed, driven, and tough. The bad-assery is sometimes laid on a bit thick, though – there were moments when as well as being shown that Devi was perfectly capable of handling herself, we would also be told this (a narrative quirk akin to “Did you see that?!”). It was unnecessary and made certain scenes feel forced, where they had started off quite natural. We see, later on, that she can still be vulnerable. There’s a forbidden, very complicated tryst. But this side of her isn’t so deep, really. I don’t think it was really meant to be, either, as this book is far more about the action and the mystery that is nagging at the back of Devi’s mind for as long as she’s a member of the Glorious Fool’s crew.

At the end, I felt like I hadn’t got to know the characters as well as I could have after a first book. Thankfully, there are (at least) two more novels to come, so I’m hoping we learn a bit more about our heroes, their backgrounds and motivations in future instalments. This predominance of surface attention also meant I wasn’t hooked throughout, and sometimes I did feel that the momentum dropping. It was always picked up again, though, and the times when my interest dipped were short-lived.

Fortune’s Pawn, and the universe Bach has created, have the welcoming familiar-otherness of series like Firefly and Star Wars. Things are obviously new and science fictional, and yet not buried in unpronounceable names, swamped by neologisms, or advanced-level (theoretical) physics. That’s not to say that the book is dumbed down or cliché – it’s just not over-complicated by unnecessary Otherness. I just get the impression that it’s far more about writing an action-packed, addictive SF romp than theorising about what the far future may actually be like. Mission accomplished! There are a few solid innovations, species, and quirks throughout, which kept me reading.

Overall, then, this was a fun read, and I’m quite looking books two and three. I would certainly have liked a bit more depth, but Fortune’s Pawn has done pretty much what every first instalment aims to do: kept be interested in reading more of the series. The ending offered an interesting development and twist, and I think it bodes rather well for book two, Honour’s Knight.

Fortune’s Pawn will be published by Orbit Books in the US and eBook in November 2013, and in UK print in February 2014. The book also includes an excerpt of Honour’s Knight, which is released late February 2014, and also an interview with the author (which was rather fun).