“The Shining” by Stephen King (Hodder) 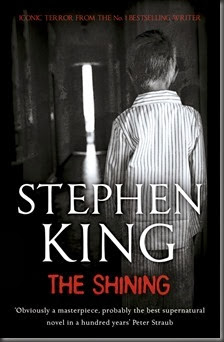 Perhaps King’s most famous novel. Review by a first-time reader.

Danny Torrance is only five years old, but in the words of old Mr. Hallorann, he “shines” with an exceptional psychic talent. For most of Danny’s life, his clairvoyant abilities have helped him to puzzle out his parents’ troubled relationship, but when his father accepts a position as the winter caretaker for the Overlook Hotel high in the Rocky Mountains, the little boy’s visions spiral into the realm of nightmare.

As blizzards isolate the Torrances, the hotel seems to develop a sinister life of its own. At night, unseen revelers ride the elevators and even the animal-shaped hedges of the topiary prowl the hotel’s grounds like threatening predators. But when Danny meets the woman in room 217, he discovers that the hotel’s phantom guests are more than shadows. Like Danny, the Overlook shines, but the energy it emanates is deadly.

The Shining is one of those novels pretty much everyone knows about. And I wouldn’t be surprised if, like me, they know many references from it without having ever read the book. True, some will know about it from the Kubrick movie (which Stephen King is not too fond of) – although, I haven’t seen that, either. When I got my hands on the novel, I was certainly eager to see what all the fuss was about, and fill in this important gap in my reading history. It is, of course, brilliantly written. But. While it is a fascinating read, there were a couple of things that didn’t quite click for me. I would, however, agree that this is essential reading.

I’m not really sure what to write in this review. It’s a novel that certainly made me think. It’s far more psychological than supernatural (in my opinion). It didn’t “terrify” me, but it was emotionally affecting. Danny, the child, is sympatico, and so many scenes made my heart ache for him. He has “the shine”, a hyper-, supernatural awareness of other people’s emotions, and also telepathic gifts. As he’s only five, he struggles to understand a lot of what he ‘hears’ and taps in to. Jack, his father, is an emotional wreck, fighting against his genetic disposition towards alcoholism and violence. Wendy, Danny’s mother, is the product of a verbally- and emotionally-abusive family (in this case, her mother basically thinks she’s incompetent, a waste of space, and so forth). The majority of the novel is presented through these three filters: Danny’s confusion, his frustration and outright fears; Jack’s suppression of his impulses; Wendy’s self-consciousness and lack of belief in herself. Exacerbating all of their neuroses and hang-ups, is their solitary life at the Overlook Hotel, effectively trapped their during the harsh, inhospitable Coloradan winter. It’s a fascinating, chilling glimpse into the minds of two emotionally damaged parents, and their psychic, confused child.

My ‘issues’ with the novel (for want of a better word) are not with the story, or the majority of King’s approach. It’s a fascinating story of the psychological impact of lifetimes of abuse – both physical and emotional – exacerbated by extreme cabin fever. And some actually supernatural goings on. Maybe. What niggled for me was the relentlessness of King’s characterisation. It was excellently written, and I was engrossed for the majority of the novel, but there were certainly times when I felt that King got into a repetitive cycle – after three or four times of making a point about Jack’s or Wendy’s shortcomings, the fifth and sixth (and sometimes seventh) times around felt like overkill, and the momentum did drop a couple of times. Part One, in particular, was very heavy-handed in its approach to situating the reader in this family’s life and minds. It is a testament to King’s writing skills, though, that he nevertheless brought me back to the story each and every time I started to think things were getting too bogged down. 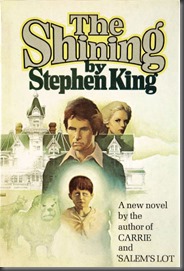 Why “maybe”, above, when I mentioned the supernatural? Well, the introduction to the edition I read (Hodder, 2011) could be seen as rather leading. It includes King’s opinion of what actually causes most the weirdness and psychosis in the novel. While I nevertheless came to my own conclusion, and there are certainly some weird and creepy-as-hell goings-on, I think it did prime my impression, or influence how I read the novel. [Maybe it should be an afterword, in future editions?] A really minor complaint, though.

Overall? I’m very glad I finally read this, and I wish I hadn’t taken so long to do so. It’s by no means perfect, but it is frequently engrossing, gripping, and chilling reading. King’s attention to detail throughout is both excellent and also natural. I was reminded of Robert Jackson Bennett’s writing, actually (only, less contemporary than RJB’s), who I read before this. It certainly deserves its place as a literary classic, and an essential read for anyone with an interest in horror, thrillers, psychological tales, and also writing in general. As someone who has read a fair bit of King’s non-fiction (his Kindle Single, Guns, is superb), but never got through the only other novel of his that I’ve tried (Dreamcatcher, which was Messed Up), I’m glad I finally popped my King Fiction Cherry (there has got to be a better way to phrase that…).

I can’t wait to get my hands on Doctor Sleep, the highly-anticipated sequel [oh, I wish I could afford the limited edition of that book…]. Definitely recommended.

The Shining was first published by Doubleday in 1977 (cover above). It is now published by Hodder in the UK, and by Anchor in the US.