Guest Post: “The Delphi Room – Through the Looking-Glass” by Melia McClure 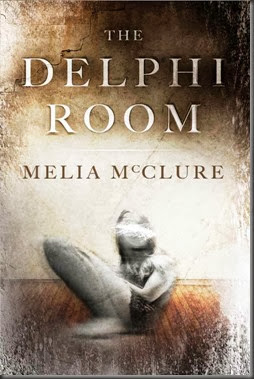 In my novel, The Delphi Room, two people watch the past of the other unfold in a mirror. Trapped next door to one another in rooms they believe to be Hell, Velvet and Brinkley are captive audience to the disturbing “home movies” that play in a mirror that hangs in each of their prisons.

Mirrors are compelling symbols and have appeared in various art forms and spiritual texts throughout the ages. The Oracle of Apollo at Delphi, referenced in my book’s title, demanded of ancient Greeks “know thyself” – no small demand, and one which my characters grapple with mightily, in mightily eccentric fashion. Among other things, mirrors have historically symbolized self-knowledge and wisdom, and like the ancients who returned to Delphi again and again in search of answers to the riddles of life, countless numbers of people currently revisit a mirror as a daily reference point in the evolving construction of identity. The Delphic oracle answered seekers’ questions with riddles, and for mirror-gazers the riddles of the mind have a drastic impact on the perception of the confounding entity known as “self” that is reflected in the glass.

In the world of my novel, mirrors are also a means of two totally isolated people coming to understand the forces that have buffeted and shaped the other, and thus – as understanding creates connection – they give rise to Velvet and Brinkley’s growing bond. Mirrors can symbolize parallel universes or alternate realities, and both of my main characters are trapped in a hellish alternate reality while at the same time experiencing the universe of the other. And when, late in the book, Velvet and Brinkley jump into the past of the other through the mirror, rendering the past present, diverse realities are brought together, which alludes to the symbolism of an all-surfaced mirror: that all realities are one and seen and understood from all sides in the context of eternity.

But beyond the literal mirror-as-object, many of the characters themselves play some sort of mirroring role. Velvet’s psychosis, the Shadowman, reflects back to her multiple aspects of her selfhood: self-loathing, fear, creativity, ingenuity and rage. Brinkley’s psychosis, ’20s film starlet Clara Bow, references her tragic personal history – a history shared by the real-life Clara Bow – and in many ways it mirrors Brinkley’s crushingly sad upbringing: both had mentally ill mothers and, among other common experiences, Brinkley’s mother tried to kill him and as a teenager Clara awoke to find her mother holding a butcher knife to her throat. One could argue that Brinkley’s fractured mind chose to conjure that particular illusory movie star as an object of love because he found solace in the kinship of shared tragedy. Again, mirroring fosters connection: people seek their own humanity reflected back at them in the humanity of another – because, after all, humanity is about oneness.

The lives of Velvet and Brinkley mirror each other in many ways: their unstable mothers and absent fathers, along with their mutual obsession with cinema, furnish them with certain overlapping experiences and tendencies, though both characters are fiercely unique and individualistic. But clarity about the self can be harder to achieve than clarity about another, and the need for familial love can have an obfuscating effect, and thus it is through the mirror’s revelation of the past of the other that Velvet and Brinkley come to greater peace within themselves. As much as one’s reflection in a mirror begs the question “Who am I?”, we are all mirrors for each other, asking “Who are you?” and “Who am I to you?" The concept of identity is, of course, central to any conversation about mirrors, and the characters in The Delphi Room are fighting against crippling antagonism to define themselves on their own terms. What they see in the mirror is very different from how the world sees them, and it is in the chasm between those contrasting perceptions that the truth lies. When Brinkley gazes in a mirror, Clara Bow is there to alternately love and torment him; when Velvet gazes in a mirror, the Shadowman is often reflected as a sinister, albeit colourful, presence.

When we stand before a looking-glass, do we ever really know who is looking back at us?

Melia McClure’s The Delphi Room was published by ChiZine in September 2013. Be sure to follow the author on Twitter for more updates about her work, etc. You can read a sample of the novel on Tor.com. Here’s the synopsis:

Is it possible to find love after you’ve died and gone to Hell? For oddball misfits Velvet and Brinkley, the answer just might be yes. After Velvet hangs herself and winds up trapped in a bedroom she believes is Hell, she comes in contact with Brinkley, the man trapped next door.

Through mirrors that hang in each of their rooms, these disturbed cinemaphiles watch the past of the other unfold—the dark past that has led to their present circumstances. As their bond grows and they struggle to figure out the tragic puzzles of their lives and deaths, Velvet and Brinkley are in for more surprises. By turns quirky, harrowing, funny and surreal, The Delphi Room explores the nature of reality and the possibilities of love.