In the post-apocalyptic TV show “Revolution,” one of the characters, a former Google executive, says, “80 million dollars in the bank and I would trade it all right now for a roll of Charmin.” Of all the things that society has lost, at that moment, he misses commercially-produced toilet paper. It’s the little things that count.

I write the Ascendant Kingdoms Saga, a post-apocalyptic medieval epic fantasy series, for Orbit Books. In Ice Forged, the first book in the series, my characters have to come to terms with what they’ve lost, both big and small. Oddly enough, sometimes it’s the small things that matter the most.

Epic fantasy usually deals with the sweeping repercussions of events and decisions — the wars, assassinations, dynastic conflicts and economic collapses that change the balance of power. Certainly anything worthy of being called an apocalypse affects the superstructure of society: government, commerce, economics, and technology. Add in plague and natural disaster and a nation, continent or kingdom loses a significant portion of its workforce, its intellectual capital, its history and its physical infrastructure. Those losses are guaranteed to change what daily life is like for the survivors, and to make just getting by much more difficult. 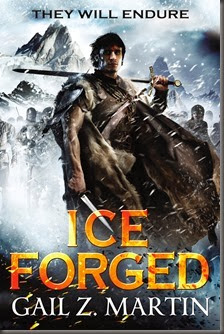 Yet for individuals — whether real people or book characters — sometimes the big losses seem distant and abstract and it’s the small losses that drive home just how much life has changed and what is gone. In Ice Forged, characters mention what they miss, little things like memories of how holidays were celebrated and favourite foods that are now difficult or impossible to get. Perhaps it’s the realization that the landmarks — like a castle or the main street of a city—that seemed immutable are now ruined. It’s the dislocation of war and cataclysm that causes long-time neighbours to go missing, and the people you always met in the course of your daily life to vanish. Or it’s discovering that with crops unplanted or unharvested and distilleries and vineyards ruined, there’s not going to be any new good wine, ale or whiskey any time soon.

When the means of production are destroyed, whether those are craftsmen or factories, the goods in existence are all the goods there will be until manufacturing is restored. For the characters in Ice Forged, that means any goods they can’t grow themselves or create from raw materials. Not only will there be no new brocades or silks (and nowhere to wear them), but no new metals or coal mined, no imported goods until trade is restored, and nothing that someone might have purchased rather than making. Things like sugar and salt, maybe even lumber and clay become difficult to find. Looting the ruins and the trash heaps becomes the new form of shopping. And in a million little ways, life becomes strange and hard.

In Ice Forged, the devastation of the Cataclysm goes beyond physical destruction. Mages on both sides made a doomsday strike using magic, and unintentionally destroyed the bonds that allowed men to tame magic and use it to their purposes. For a culture that depended on the little magics for everyday life, that means no healers, no using magic to keep pests out of the crops or strengthen a sea wall, no way to keep milk from spoiling or food from rotting or all the hundreds of small ways that people had come to rely on a flicker of power here and there. And after four centuries of using magic as part of everyday life, few people remember how to do things the old way.

In The Hitchhiker’s Guide to the Galaxy, Douglas Adams advised readers to “Always know where your towel is.” Perhaps he should have included some Charmin, just in case? 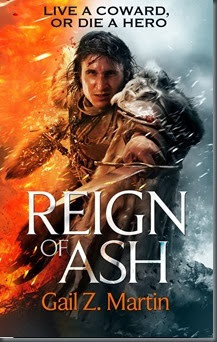 Come check out all the free excerpts, book giveaways and other goodies that are part of my Days of the Dead blog tour! Trick-or-Treat you way through more than 30 partner sites where you’ll find brand new interviews, freebies and more.

Ice Forged will be a Kindle Daily Deal with a special one-day price of just $1.99 only on October 31!

Reign of Ash, book two in the Ascendant Kingdoms Saga launches in April, 2014 from Orbit Books.

About the author: Gail Z. Martin is the author of Ice Forged in The Ascendant Kingdoms Saga and the upcoming Reign of Ash (Orbit Books, 2014), plus The Chronicles of The Necromancer series (The Summoner, The Blood King, Dark Haven & Dark Lady’s Chosen) from Solaris Books, and The Fallen Kings Cycle (The Sworn and The Dread) from Orbit Books. In 2014, Gail launches a new urban fantasy novel, Deadly Curiosities, from Solaris Books. She is also the author of two series of ebook short stories: The Jonmarc Vahanian Adventures and the Deadly Curiosities Adventures. Be sure to check out Gail’s website and follow her on Twitter and Facebook for more up-to-date news. Gail can also be found at the Disquieting Visions blog and on the Ghost In The Machine Podcast.