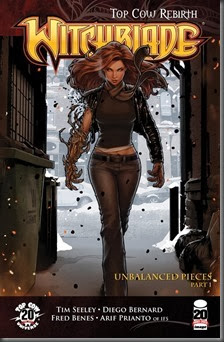 In the wake of Top Cow’s Rebirth, Sara Pezzini has relocated from New York to Chicago and struggles to adapt to being a private detective. Pezzini quickly discovers that a change of scenery and occupation hasn’t changed one thing... the Witchblade is still a magnet for the supernatural Quickly drawn into a conflict between two mystical gangs, she must once again balance her responsibility as bearer of the Witchblade with her personal life.

I haven’t read a great deal of Witchblade comics, or other comics in Top Cow’s universe (Artifacts, The Darkness), but I’m somewhat conversant in the mythology. I read the first book by Ron Marz, which was itself a reboot/jumping-on-point, but then became distracted by the New 52 and a selection of other books (I’m not proud of it, but… Batman, baby!). After it was announced that Tim Seeley was taking over writing duties, my interest was piqued once again, having rather enjoyed his Hack/Slash horror-comedy series. So I dove in... And rather liked what I found.

I’m not sure that this needs a particularly long review. People who know the series already will know pretty much what to expect – it’s dark, gothic, but also slick. The only major difference is the location, as Sara has moved to Chicago (interestingly, that’s also where Dick “Nightwing” Grayson just moved to in the DC New 52). For new readers, this book has a lot of extra material that gives you some background. It’s not essential to read in order to enjoy this, though, as the concepts are pretty tried-and-true, but with some well-conceived and original developments.

Seeley blends a private investigator storyline and feel with just the right amount of weird in the first issue/chapter to get us intrigued. But then things get really weird – Sara tangles with biker witches, age-sucking creatures with a very strange version of their own ‘Witchblade-armour’, and a strange, supernatural beastie with a long history of fighting bearers of the Artifacts…

Things are not going well for Sara in her new environment, and her sense of displacement and ennui is well written. She’s finding her place, and it’s not going particularly well – on the social, financial, and divine purpose fronts. Add to this a policewoman who has it in for Sara, and a rather unsatisfying romantic (un)attachment with a stage magician harbouring an ulterior motive.

The story is well-written, well-paced and well-realised. Despite my aforementioned lack of fore-knowledge of the extended Witchblade mythos, I didn’t have any trouble following this. It’s weird, it’s sometimes amusing, it’s often creepy. The art team does a great job of bringing Seeley’s story to life on the page in crisp, sharp artwork. It’s eye-catching and vivid. I’m very glad I picked up volumes two and three in the ComiXology sale the other day, as I think I’ll be sticking around for a lot more of this series. I may have to try out the Rebirth The Darkness series, too.

If you are a fan of supernatural stories, filled with the occult, magical and gothic weirdness – not to mention a few gribbly beasties – then Seeley’s Witchblade is absolutely for you. Definitely recommended.

Posted by Civilian Reader at 7:28 PM