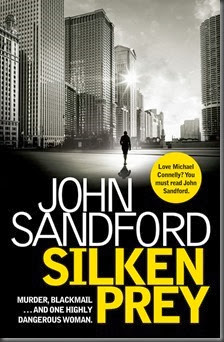 Murder, scandal, political espionage, and an extremely dangerous woman. Lucas Davenport’s going to be lucky to get out of this one alive.

Very early one morning, a Minnesota political fixer answers his doorbell. The next thing he knows, he’s waking up on the floor of a moving car, lying on a plastic sheet, his body wet with blood. When the car stops, a voice says, “Hey, I think he’s breathing,” and another voice says, “Yeah? Give me the bat.” And that’s the last thing he knows.

Davenport is investigating another case when the trail leads to the man’s disappearance, then — very troublingly — to the Minneapolis police department, then — most troublingly of all — to a woman who could give Machiavelli lessons. She has very definite ideas about the way the world should work, and the money, ruthlessness, and sheer will to make it happen.

No matter who gets in the way.

I’m a huge fan of Sandford’s Minnesota-based crime thrillers. In fact, I would say that he’s probably my favourite thriller author bar none. Silken Prey is the 23rd novel in his Lucas Davenport series, and the series just keeps firing on all cylinders. This time, Sandford turns his attention to politics, which always offers new and ‘exciting’ ways in which an investigation can become muddled, dangerous, or even impossible. Lucas is tasked by the Democratic governor to investigate what appears to be a political framing of the Republican Senator. Making things really tricky, of course, is the fact that they are all in the middle of the election. Party politics, dirty tricks, extreme suspicion, and a deadly killer (or two) operating on the sidelines? This is Davenport. He can handle it. Maybe…

The novel displays Sandford’s easy, inviting prose style, the wry humour that has always made this series stand out, and also his engaging and endearing characters. The friendship between Lucas and his various colleagues feels very natural – after 23 novels, how could it not be? The antagonists of the piece are well-drawn, avoiding cartoon-ish cliché or exaggeration. It was nice to see Kidd and Lauren make an appearance, as it feels like a really long time since we saw them last (the two of them had their own, four-book series earlier in Sandford’s career – and I would highly recommend those, too). The novel is uncluttered, unpretentious, and very focused. It’s not a blockbuster thriller, with a focus on character way more than guns or action-scenes.

The ending was just a smidge muddled, as if the author felt he needed to wrap things up relatively quickly, but I think he nevertheless manages to pull it off, and it wasn’t dissatisfying. It didn’t feel rushed, actually. The conclusion also leaves things open for further exploration in a later book (which I really hope Sandford does). I get the feeling that Sandford has some big plans for Davenport’s future, and I can’t wait to read the next book in the series. This far into a series, it is a testament to the author’s exceptional skill as a writer that he manages to make each new novel as gripping and addictive as the last. Long may this continue!

A short-and-sweet review, this. I don’t want to delve too much into the story, as there are a couple of switches and changes at certain points of the narrative. The synopsis, above, should suffice to give you as much as you need. All I can say is that John Sandford is a superb writer, and Silken Prey is yet another strong addition to his beloved series. I will really have to catch up with the companion series, which follows Davenport’s protégé (of sorts), Virgil Flowers. I’ve read the first in that series, but have six more to catch up on. I may plan to do that over Christmas and New Year.

Very highly recommended for all fans of crime thrillers.

Posted by Civilian Reader at 7:39 PM