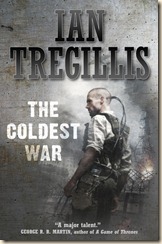 The second book in the Milkweed Triptych

A precarious balance of power maintains the peace between Britain and the USSR. For decades, Britain’s warlocks have been all that stands between the British Empire and the Soviet Union – a vast domain stretching from the Pacific Ocean to the shores of the English Channel. Now, someone is killing the warlocks, and Britain’s national security is threatened.

Meanwhile, a brother and sister escape from a top-secret facility deep behind the Iron Curtain. Once subjects of a twisted Nazi experiment to imbue ordinary people with superhuman abilities, then prisoners of war in the immense Soviet research effort to reverse-engineer the Nazi technology, they head for England.

Because that’s where former spy Raybould Marsh lives. And Gretel, the mad seer, has plans for him.

A few months ago, I finally got around to reading Ian Tregillis’s superb debut novel, Bitter Seeds. Luckily, the sequel was already out in the US, and I was very happy to get my hands on it so soon after finishing the first book. The Coldest War builds brilliantly on Bitter Seeds – it’s darker, tighter, and utterly engrossing. Easily a contender for best novel of 2012.

[Warning: Some spoilers, though I have kept this review short to avoid too many. Proceed with caution.]

In The Coldest War, the world has changed a great deal in the twenty years since Bitter Seeds ended. There are some similarities to true history, but the USSR has been able to expand across continental Europe, thanks to the utter defeat of the Nazis. Raybould Marsh and William Beauclerk, our two British protagonists, have somewhat moved on with their lives – neither are members of Milkweed anymore. Marsh is not having a good life at all – his marriage to Liv has soured, partly due to the strain caused by his son’s severe condition. Will, on the other hand, has managed to recover splendidly from his descent into addiction, although he maintains an air of self-loathing borne of his actions in Bitter Seeds.

Geopolitically speaking, the game has fundamentally changed. The Soviet Empire has expanded, and they have access to Dr. von Westarp’s research. From the very start of the novel, we are given a glimpse of how far they have been able to take the mad Nazi doctor’s research, thanks to their capture of Klaus and Gretel – whom they have incarcerated, studied, and tortured for two decades in a secret Soviet research facility. Klaus is miserable, but Gretel is still spinning her web of deceit and manipulation, all in the name of some incredible long-game that she’s foreseen.

There’s no denying that The Coldest War is darker than Bitter Seeds. It’s also just as action-packed, and the pacing is absolutely superb. Life has become grim for Marsh, especially. As the story unfolds, he and Will are drawn back into Milkweed’s operations, and we’re introduced to a few of the developments on the British side of this new version of the Cold War.

I really want to avoid throwing out spoilers in this review – and there are so many surprises and shocks throughout the novel, that to discuss it at any great length would certainly spoil things for new readers. Needless to say, if you enjoyed Bitter Seeds, then I have no doubt that you’ll love The Coldest War just as much, if not more.

Tregillis’s prose is tight, fluid and a pleasure to read. The story is superbly crafted, and the narrative and action will pull readers through. I was hooked from the first page, and was very frustrated whenever I had to stop reading. That I remained hooked when reading this over a very busy work week is a testament to just how good this novel is – usually in that situation, the novel becomes a victim of my work-distraction. Not so with The Coldest War. Even in the midst of a new job, I had to actively resist picking this up during the work day.

This novel is superb. I can’t recommend this highly enough. A must-read for 2012.

Also on CR: Ian Tregillis on “The Origin of the Götterelektron”

The Coldest War will be published by Orbit UK in February 2013.

Posted by Civilian Reader at 3:22 AM