Readers should know by now that I’m quite the fan of Michael J. Sullivan’s Riyria Revelations series, which was published by Orbit Books last year (after a successful self-publishing run). Orbit collected the six novels into three omnibus editions – Theft of Swords, Rise of Empire and Heir of Novron – of which I’ve read and thoroughly enjoyed the first two.

They are fantasy novels that, I think, tap into some of the classic elements of what made early fantasy so popular, but with a more-modern twist and sensibility. They don’t take themselves too seriously, while also not shying away from serious topics or ‘adult’ content. There was some internet squabbling over the novels, as one reviewer produced what many thought was a hatchet job, while others thought was an exemplary polemic about perceived weaknesses of the novels. Regardless, I rather enjoyed these (except for the long sea voyage, but that’s more a personal aversion to ship-based fiction than anything wrong the author did).

I’m not sure what’s kept me from diving right into the third book, but I expect I will do so pretty soon (I’m feeling in the mood for that sort of fantasy novel at the moment).

Anyway, this brings me on to what was unveiled today, while I was at work (and therefore unable to blog about). From Orbit’s website:

“We are excited to announce the next book by Michael Sullivan, THE CROWN TOWER! Orbit will be publishing worldwide in August 2013! It is the first book in the Riyria Chronicles and it will be a two book series, with the second novel, THE ROSE AND THORN, following soon after.” 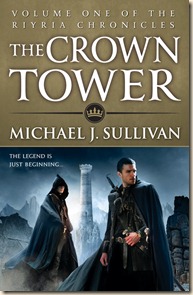 This makes me both excited but also a little wary. Prequels are always tricky, but given that the Riyria Revelations are filled with mentions of early adventures and exploits, I think two novels to give Royce and Hadrian a little more backstory could be a good thing.

Two men who hate each other. One impossible mission. A legend in the making.

Hadrian, a warrior with nothing to fight for is paired with a thieving assassin, Royce, with nothing to lose. Together they must steal a treasure that no one can reach. The Crown Tower is the impregnable remains of the grandest fortress ever built and home to the realm’s most prized possessions. But it isn’t gold or jewels that the old wizard is after, and if he can just keep them from killing each other, they just might do it.

For more on the announcement, I’d recommend heading over to Sullivan’s website, where he talks about the duology and his thoughts on returning to Hadrian and Royce’s past.

Posted by Civilian Reader at 3:35 AM