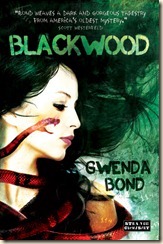 I blitzed through this novel. Bond’s writing is tight and her plotting fluid. Taking a North Carolina historical mystery and twisting it for a supernatural, horror flavour, Blackwood is a pretty solid YA novel. If you like your fiction with a dollop of suspense and an understated romance, then Blackwood is for you. This is a solid debut that has put Gwenda Bond onto my “Authors to Watch” List.

There were two main things that jumped out at me about Blackwood. First, the suspense of what’s going on is nicely done (especially in the first half, which was one of the best first-halves-of-a-novel I’ve read in a long time). Secondly, the romance was pretty understated and – most importantly of all – believable. More on that in a moment.

The story has a wonderful, understated creepy atmosphere. We’re kept in the dark about much of what’s really going on for a little while, and I liked that. Sometimes it pays to give the reader something up-front, which we were in a single-page historical note – but we’re really thrown right into the present-day story. As our two protagonists investigate, more layers are added to the mystery and history of the area and the two characters’ families, both of which are (of course) inextricably linked to the mystery of the settlement’s founding.

As I said, Bond is quite restrained when letting the budding (obvious) romance between Miranda and Phillips (the boy with the pretentious name, as his grandmother told him). It was believable: it didn’t move at hyper-speed, it was awkward, and our couple-to-be were hesitant around each other, much as you expect new teen relationships to be. But, and most importantly, it wasn’t overly-angst-ridden and certainly didn’t dominate the story, despite Miranda and Phillips being in almost every scene. I really liked this – I have quite a strong aversion to romance-heavy stories, because thus-far I’ve found few I believed. I particularly liked Miranda’s way of thinking about Phillips, as “a boy who lent himself to wondering about.” Having personal experience with someone who was definitely a woman who lent herself to wondering about (constantly), I thought this was a great turn of phrase.

There was one thing I really had to take issue with, something that happened roughly half-way through the novel, that is possibly the most common YA cliché I know of: the police have made a highly dubious leap in detecting, thereby pointing the finger at one of our protagonists. This leads them to Do Everything To Run Away Suspiciously Because That Always Works For The Characters In Other Books... It’s not a big deal, but it made me chuckle when it happened.

Overall, despite the first-timer niggles, Blackwood is a solid debut YA novel: Bond’s prose is assured and accessible, the story races along and never lets up, and I was easily caught up in the narrative and story.

Bond is an author with a lot of promise, and I’ll look forward to reading her next novel, whatever it happens to be about.