An Interview with CHRIS F. HOLM 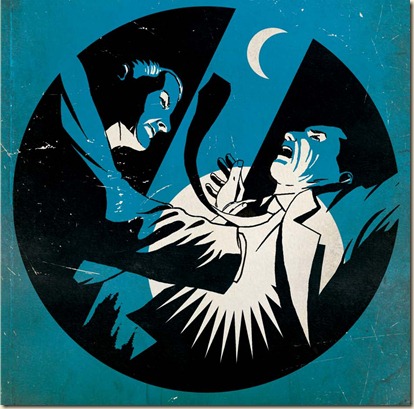 Chris F. Holm is one of Angry Robot’s best finds, and with his Collector series has amassed an ever-growing number of fans. With the imminent release of The Wrong Goodbye (25th September in the US, 4th October in the UK and rest of the world), I thought it was a perfect time to ask him about his writing and novels.

I thought I’d start off this interview with something easy: Who is Chris F. Holm?

Oh, boy. That’s my easy one? Then I’m in trouble. Let’s see... well, I’m quite fond of pie. And a terrible, if enthusiastic, guitarist. In my day job (yes, I have one, and unless your favorite author’s name is King, Rowling, or Patterson, he or she probably does to) I’m a scientist. The rest of the time, I make up silly stories in my pajamas. And the fact that folks are willing to pay me for them reinforces my worldview that the world’s far stranger than we give it credit for. 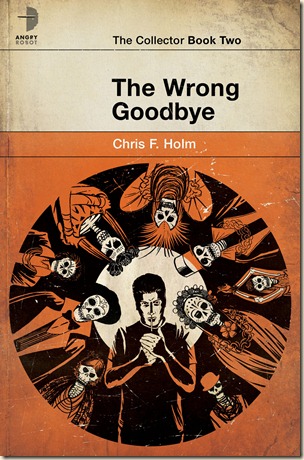 Your latest novel, The Wrong Goodbye, is out in October through Angry Robot Books. It’s the second in your Collector series. How would you introduce the series to a new reader, and what will fans find in book two?

The Collector novels recast the battle between heaven and hell as Golden Era crime pulp. Depending on the audience to which I’m pitching them, I’ve described them variously as supernatural thrillers, cross-genre crime fantasy, or fantastical noir. Picture angels driving Crown Vics, demons running speakeasies, and the threat of Apocalypse around every corner, and you get the gist. The stories center around Sam Thornton, the series’ titular Collector. He’s a guy who made a deal with a demon long ago to save his dying wife, and is now condemned to spend eternity collecting the souls of the damned, and ensuring they find their way to hell. Only it rarely goes as smoothly as all that.

As for what readers should expect in book two... DEAD HARVEST was a bullet train, lean and propulsive. THE WRONG GOODBYE is, I think, a wilder, woollier, more expansive tale. It’s a little creepier, a little funnier, and I think it affords the reader a chance to get to know Sam – and the world that he inhabits – better. It’s got some crazy set-pieces and a mystery I’m quite proud of, and I think it lays down the blueprint for what the series is going to look like from here on out.

What inspired you to write this series? And where do you draw your inspiration from in general? 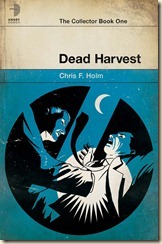 The genesis of this series was a scene that ran through my head one night as I was drifting off to sleep, in which one man tailed another as he staggered home from a pub. The drunk one popped into an alley to take a leak. His pursuer followed. When the drunk man turned around, his pursuer plunged his hand into the drunk man's chest, and tore free his soul. As the drunk man's lifeless body hit the ground, his assailant said to him, “Sorry – it’s nothing personal.”

For days afterward, I couldn’t get that scene out of my head. Who were these men? How had they come to be in that alley? And why on earth did the assailant apologize to his victim? I couldn’t help but spin a tale that would explain it all. One chock full of my pop-cultural obsessions: classic crime pulp, horror flicks, Lynchian weirdness, religious conspiracy. And that tale became DEAD HARVEST.

Of course, that’s just book one. Book two, THE WRONG GOODBYE, folds in yet more influences, from buddy action-comedies to Lovecraft, with references to everything from cheesy Eighties flicks to Greek myth thrown in for good measure. The way I figure it, I like all that stuff at once, so other folks might too.

The simplest answer is that I was raised in it. My love of genre stretches back farther than I can remember. My mom’s from a family of cops – avid mystery fans all – so I was raised on hand-me-down Hardy Boys and Nancy Drew, and Poe and Doyle and Christie. My dad’s family tended more toward fantasy and science fiction; I recall working my way through a box of well-worn paperbacks they’d given me, and discovering the likes of Anne McCaffrey, Terry Brooks, Arthur Clarke, and Frank Herbert. I suppose it’s no wonder when I sat down to write a novel, it wound up a strange, cross-genre mash-up of fantasy and crime.

I consider myself incredibly lucky to be a working writer. Not only is writing the most challenging and rewarding thing I’ve ever done, but the community surrounding it – readers, writers, editors, you name it – are quite simply the coolest, most interesting folks I’ve ever had the pleasure of encountering. It’s a hell of a thing to find one’s tribe. I’m one of the lucky few on this planet who have.

As for specific writing practices, I confess, aside of trying my best to carve out writing time each day (tough sometimes for a writer with a day job), I really don’t have any. As of this writing, I’ve finished four novels (my two Collector novels, plus two others that are currently in the hands of my agent), and no two were written alike. Some I outlined. Some I didn’t. Some I barreled through. Some I set aside for months, or even years. Some I researched like crazy beforehand, and some I wung. I think the key for me isn’t in adhering to a specific method, so much as listening to the book, and writing it the way it wants to be written.

Those are two very different questions. I suppose I’ve always written stories – I even got sent to the principal’s office for a particularly gory alien-invasion tale I wrote in grade-school – but they were mostly to entertain myself. I was far too practical a kid to consider writing as a career. And so I wound up on another path entirely, working toward a PhD in infectious disease research. It’s what I’d convinced myself I wanted to do with my life, only as it turns out, I was miserable. And so, with some encouragement from my lovely wife, I dropped out and began writing in earnest for the first time. That was ten years ago now, give or take. I haven’t regretted it a moment since.

Like most writers, I consider myself a fan first. And as someone with a foot in two genres, I’m nuts about fantasy and crime fic both. As far as I’m concerned, both are thriving, and for much the same reason. A lot of people grumble about how push-button publishing is killing the industry, and for all I know, they’re right. But it’s doing something else as well. The past decade’s seen an explosion of new short fiction markets, as well as countless blogs, podcasts, and anthologies dedicated short fiction. And all those markets and attention have served to usher in a new pulp era, where young writers can hone their craft, and publish alongside the giants of their genre. That kind of creative cross-pollination between past and future is vital to pushing any genre forward. Lord knows it’s proved an education for me.

As for where my stuff fits in, that’s for my readers to decide; truth be told, I haven’t the faintest. As I said, I’m a fan first, so I’m still adjusting to the fact that it fits in at all.

Right now, I’m working on the third book in the Collector series, THE BIG REAP, which is expected to be out sometime next year. I also recently finished two other novels. One’s a mainstream thriller about a hit man who makes his living killing other hit men called – appropriately – HIT. The other, PROOF, is a weird little ghost-story-slash-small-town-mystery. Other than that and the day job, I’m mostly working on finding time to get a nap in, or the occasional bite to eat.

I’ve had a good run of late. Right this sec, I’m reading a kick of a religious-conspiracy thriller called The Trinity Game, by Sean Chercover. Before that was Lee Collins’ upcoming Angry Robot debut, The Dead Of Winter; it’s a funky horror-Western tale, and a blast from start to finish. And on deck is Megan Abbott’s Dare Me, about which I’ve heard great things. 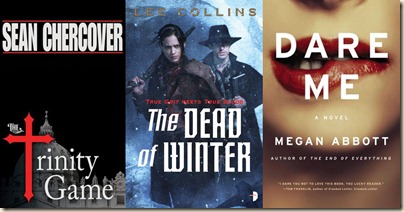 Hmm. Well, I spent a summer running a drill press in a factory that made forklifts. I spent several (hungry) years as a vegetarian. I once got a tattoo in an ex-con’s dive apartment above an Italian restaurant. And I hold a couple exceedingly boring science patents, so technically, in the eyes of the US government, I am an inventor.

The release of THE WRONG GOODBYE. A fall season chock full of book cons – Bouchercon, QuebeCrime, Murder and Mayhem in Muskego – at which I get to hang out with some of the coolest, most interesting people on the planet. Finishing my third Collector novel. And generally seeing where this crazy-ass ride as a working author takes me.

Posted by Civilian Reader at 3:48 AM